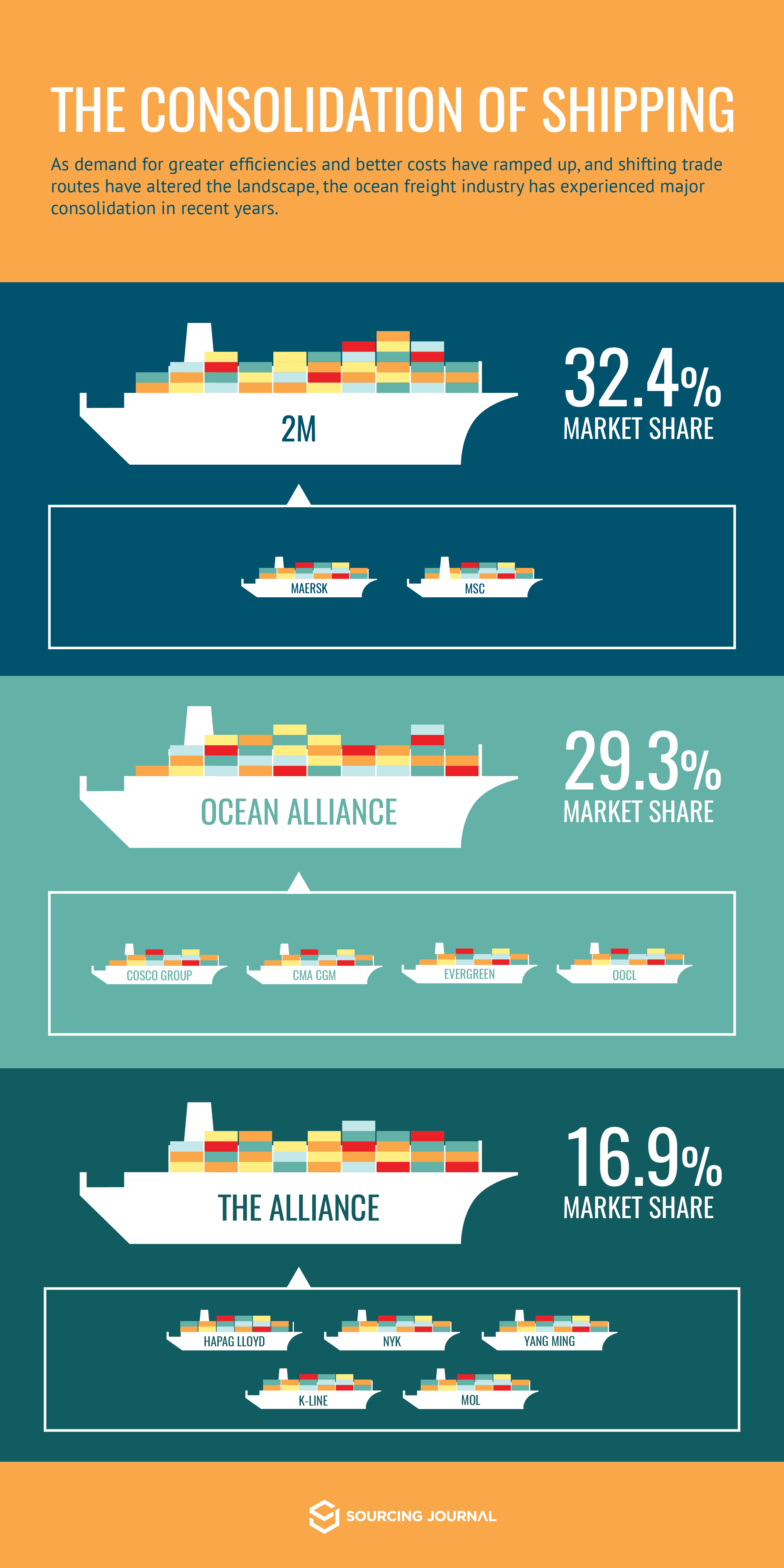 The consolidation of the ocean freight industry continued in the first half of 2018, as a trio Japanese carriers merged into one, the major cargo container haulers got bigger and the transportation alliances established themselves as a force in the sector.

The push has come in the last few years as the ocean cargo industry has dealt with volatile supply and demand issues, including vessel overcapacity, the introduction of megaships, and shifting fuel and environmental demands.

“In 2016, there were significant changes to the ocean transportation services marketplace, marked by merger and acquisition activity among shipping lines and the bankruptcy of a Top 10 ocean carrier,” said Michael A. Khouri, acting chairman of the Federal Maritime Commission (FMC), testifying to Congress in April. “As a result of these events, the number of major multi-trade lane shipping lines operating in the international trades has dropped from 21 in 2011 to 12 global carriers following the merger of the three Japanese carriers into Ocean Network Express and COSCO’s acquisition of OOCL.”

He said nine of the remaining 12 ocean carriers are currently members of three global alliances created in the last couple of years—2M, OCEAN and THE. These alliances–joint operating agreements of ocean carriers to discuss and agree on the supply of vessel capacity through the deployment of a specific service string or strings–each operate services in the major trade routes and supply 90 percent of the vessel capacity in each.

CMA CGM, considered the third-largest ocean carrier in the world, signed an agreement in June to purchase container shipping and logistics business Containerships. The Finnish company specializes in the intra-European market and will strengthen CMA CGM’s intra-European offer, including its affiliate MacAndrews’ service offering in North Europe and the Mediterranean.

This came on the heels of CMA CGM’s acquisition of a 25 percent stake in CEVA Logistics AG. With this transaction, CMA CGM plans to grow its presence in the logistics sector, a business closely related to shipping. CEVA is the No. 5 player in contract logistics, providing end-to-end supply chain solutions, and managing more than 9 million square meters of warehouses in more than 750 sites in the world. It is also ranked 10th in the world in freight forwarding, with a strong footprint in Asia.

For A.P. Moller – Maersk, the No. 1 carrier in the world, the 2017 purchase of Hamburg Süd has led to its continued growth. Combined with Maersk Line, the two carriers now have roughly 19 percent global capacity market share and more than 4 million TEUs in container capacity. Maersk said cost synergies from the merger are expected to be between $350 million and $400 million by 2019, primarily from integrating and optimizing the networks, as well as standardized procurement.

Khouri told Congress that even with the reduction in the alliances and mergers of major shipping lines, the container shipping industry remains competitive. At the beginning of 2018, ocean carriers deployed 21.1 million TEUs (20-foot shipping containers or their equivalent), of ship capacity globally, a 70 percent increase from 2009.

“Alliances can be very beneficial for U.S. exporters, importers and consumers,” Khouri said. “Such alliances allow participants to obtain efficiencies and cost-savings that can be passed on to domestic consumers especially when healthy competition exists among vessel operators.”