American cotton has dominated the global market for years. The U.S. trade war with China could soon challenge that.

The spat that’s pitted the U.S., the world’s top exporter, against top buyer China has seen Brazil emerge as a winner. That’s according to Joe Nicosia, head of the cotton platform at Louis Dreyfus Co., one of the largest agricultural commodity traders.

Even if an accord is reached, there could be permanent changes to the supply chain as the South American nation has used the opportunity to strengthen its position by boosting production and investing in infrastructure, Nicosia said.

“What we have done in the U.S. is create a long-term competitor, and we introduced them to China to take our own place,” he said Monday at a Commodity Markets Council event in Miami. “That’s not going to disappear. It’s no different than when your favorite restaurant closes and you go elsewhere. You might like it. You might go back to the other place.”

American shipments accounted for about 40 percent of the freely traded cotton globally before the tit-for-tat tariff spat. China’s move to purchase more cotton in Brazil mirrors what’s happened in soybean markets and shows how political disruptions could have long-lasting effects. As American farmers suffered from tariffs, rivals like Brazil used the opportunity to fortify ties with China, the dominant player in a range of commodity markets.

The South American nation could pose the biggest threat to U.S. competitiveness, already suffering from cheaper prices in countries such as India and Pakistan. Brazilian shipments to China more than tripled in the second half of 2018 from a year earlier, according to government data.

“There’s expanding production, expanding acreage in Brazil,” said Nicosia. “Brazil is creating new infrastructure products. They are investing, they are buying new gins, constructing them, putting in new pickers, buying new equipment. That doesn’t go away. That’s there for years to come.”

International Day Explains Why Cotton is More than Just a Commodity

For Poly and Preferred Cotton, Market Share's Moving in the Wrong Direction

Cotton futures traded in New York are down about 12 percent since the end of June, just before China rolled out most of its tariffs on American crops. Prices fell even as U.S. production disappointed.

Still, the Chinese haven’t totally moved away from U.S. markets yet. While short-term sales have dried up and some cargoes have been canceled, sales for the following year are holding up well.

“They have been unwilling to let that cotton go, and they have been rolling it forward,” he said. “They are saying: ‘We still want it’.”

While China has been using up some of its state stockpiles in recent years, driving imports lower, the nation eventually will need to buy about 14 million to 16 million bales annually, he said. Dreyfus forecasts China’s cotton imports will exceed 15 million bales in 2021-2022, according to Nicosia’s slide presentation.

“Why is it important that we need to solve this trade issue? Well, one of the most important issues is because when we look at China, we are at the cusp of a real opportunity,” Nicosia said. “China being the largest importer is going to need it, and whoever gets that business, their cotton business is really going to explode.”

In the meantime, uncertainty caused by the trade war has weighed on oil prices, making it cheaper to produce polyester, which competes with cotton.

“Without a trade deal as we look forward, U.S. supplies will get burdensome, very burdensome,” he said. “We are going to see commodity prices get depressed as we go through it. Farm income is going to suffer in order to ration production. That’s a polite way of saying the repercussions will be: ‘we are going to force farm communities to go broke’.” 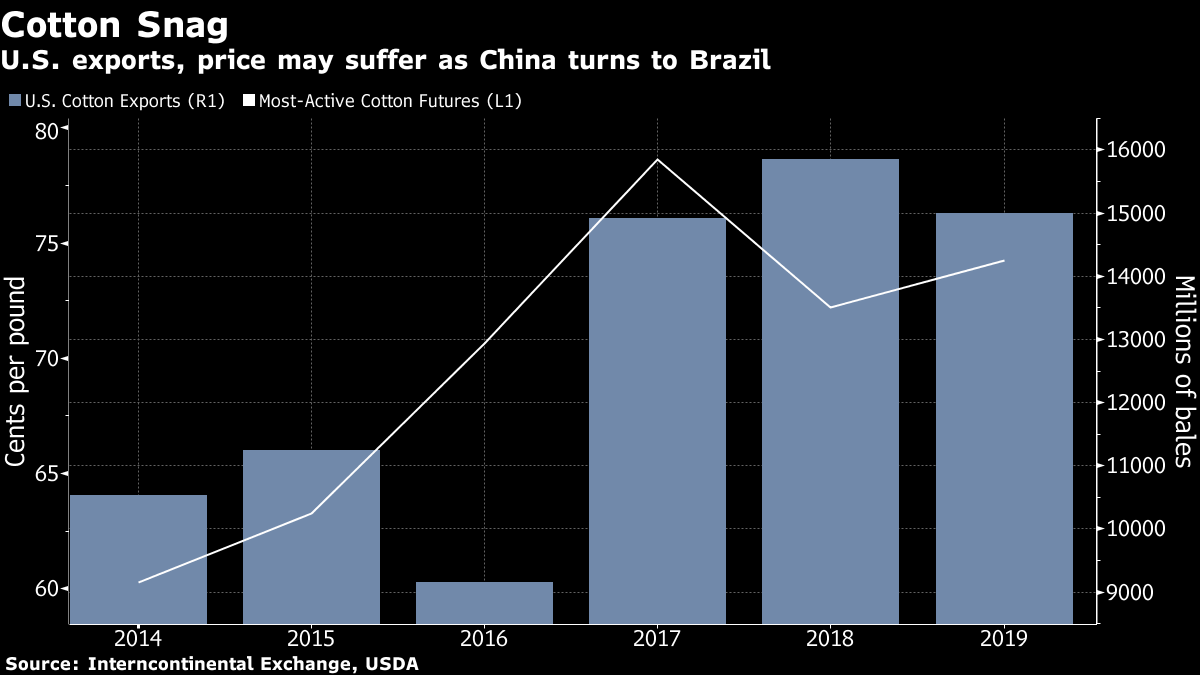