Sustainability fever has gripped the industry, with both brands and material manufacturers examining the waste, pollutants and earth-harming elements inherent to their creations. But as new innovations take hold, certain legacy fibers are getting a second chance at greatness.

In recent seasons, cashmere seems to have come back in vogue. But the 2020 iteration isn’t the same fiber that makes up your grandmother’s favorite cardigan.

According to Margaret Coblentz, founder of San Francisco-based direct-to-consumer Frances Austen, modern cashmere is taking on a cachet all its own. Coblentz hopes that her sustainable sweater line will help pave the way toward more conscious apparel consumption.

“There has been such a big push toward democratizing cashmere,” Coblentz said. “A lot of people have been leaning into the $99 cashmere sweater, or whatever the catchy price point is—that brings a less-attainable fabric to the masses.” 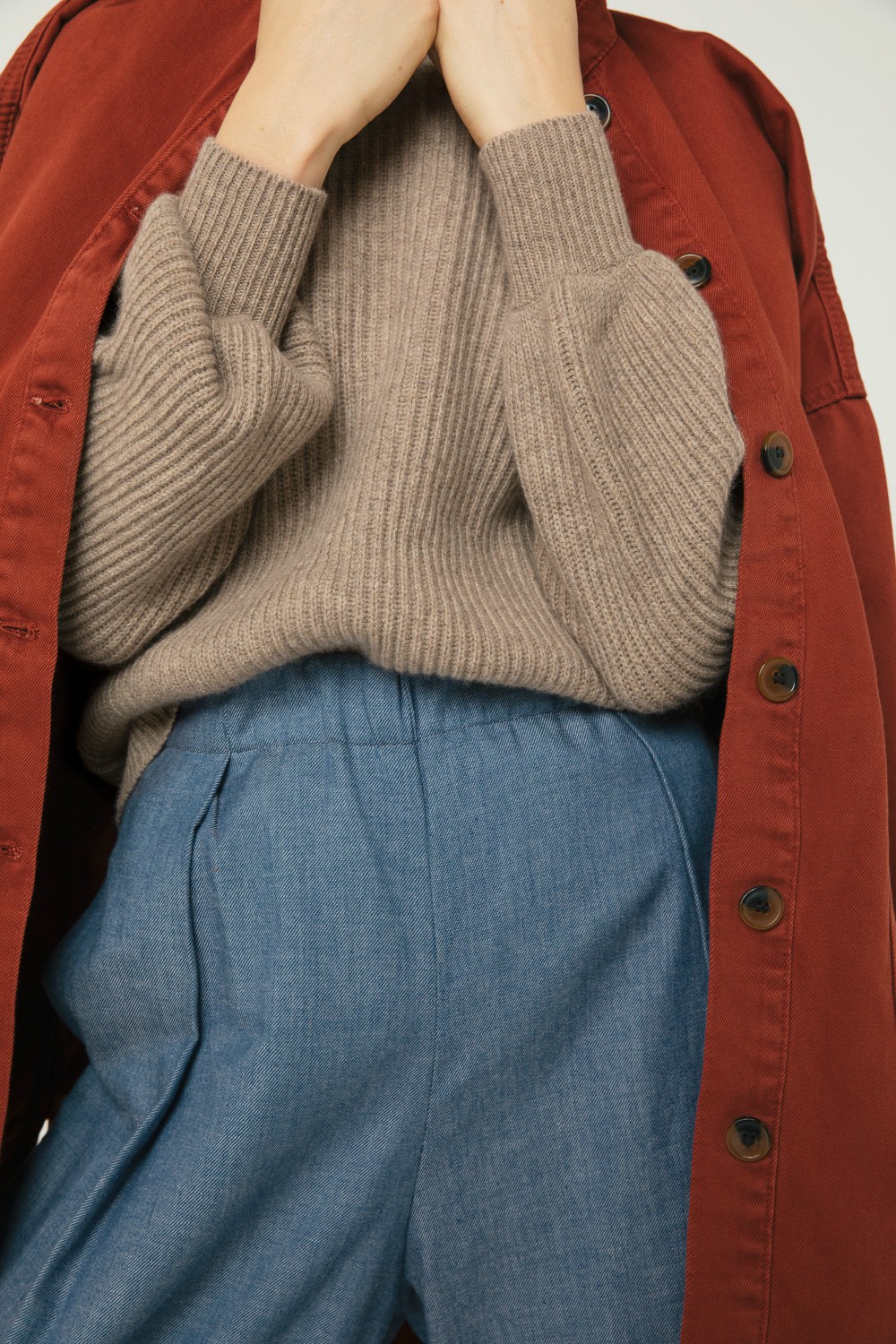 The trend began in 2008 when cashmere prices took a nosedive, due in part to the legendary economic recession. And while the material’s new, lower price point served to reinvigorate interest from shoppers who were put off by sticker shock, Coblentz said cashmere’s quality suffered under the increased demand.

After working for years in the fast-fashion sector, Coblentz decided to slow down and examine the aspirational material. What she found was that many of Mongolia’s cashmere goats were being shorn multiple times per year, subjecting them to sunburns in the summer and frigid winters without coats.

Because of this process, many cheaper sweaters on the market are made with shorter fibers that begin to pill almost immediately. “The higher the quality yarn, the less soft it is in the beginning,” Coblentz explained. Longer, more stable fibers ensure that a sweater lasts longer, while shorter ones provide a soft hand-feel but shorter garment lifespan.

Coblentz sought to create her own DTC brand that would provide high-quality, ethical cashmere at a reasonable—not cheap—price point. She began working with Italian fiber spinner Cariaggi, which provides yarns to Europe’s most prominent fashion houses.

Cariaggi works with nomadic shepherds in Mongolia who brush—rather than shear—their sheep, making for longer fibers and happier animals, Coblentz said. The spinner “takes pride in supporting” the local population rather than treating the fibers “like a commodity product.”

The spinning plant is run completely on renewable energy, she said, and has cut its carbon footprint by 40 percent in recent years through the use of hydro, wind and solar power.

Yarns are knitted into garments in Scotland by centuries-old textile mill Johnstons of Elgin, which upcycles its factory scraps into salable products.

“The Scottish people in particular are actually known for their frugality and so they’ve always had a repair program,” Coblentz said. It’s a benefit she wanted to pass along to Frances Austen customers, who can send their sweaters back to the U.K. for repairs if needed. “There’s a philosophy that these garments are not something that should be wasted,” she said.

More mature shoppers have taken to Frances Austen, nostalgic for a time when functionality and longevity drove people to shell out for wardrobe staples. “Then, there’s a younger customer who’s beginning their journey to conscious shopping and is learning to invest in pieces that last longer,” she said.

“What I learned from my days in fast fashion is that you get what you pay for,” she added. “If it seems too good to be true, you have to ask yourself why.

“People are realizing that their decisions have far-flung consequences and their purchasing power really means something,” Coblentz said. “I think it’s great that they’re starting to ask brands where they’re getting their materials from, and demanding that the answer be something they can feel good about.”

New York-based State Cashmere was founded in 2017 by Hao Rone, who was raised in Mongolia in a family of shepherds. His line’s raw materials are sourced from ethical operations in the country’s inner region, where he grew up.

“These are trusted relationships, and we will never work with middlemen, cashmere traders or brokers,” Rone said in a statement. “They traditionally drive up costs, leave the shepherds struggling to make a living, and charge a very high price to the customer.”

The line specializes in basics, not trends. “We believe the world needs to invest in slow fashion,” Rone said. “This is not only more sustainable for the environment, it means that your cashmere staples are seasonless and with proper care, can last you a lifetime.”

New York and Los Angeles-based Naked Cashmere has made its name on similar principles, ensuring that animals are treated humanely and Mongolian herders are paid fairly. The brand has also made a point to educate consumers on the world’s most desirable fiber, with a “Cashmere 101” page on its site devoted to the ins-and-outs of the material.

In early March, Naked Cashmere launched its first line of recycled cashmere, dubbed Cashmere Reborn. Post-consumer pure cashmere garments are washed and deconstructed, their fibers sorted by length and then spun back into usable yarns.

The Reborn line is Global Recycled Standard certified and unblended with other fibers.