Strong consumer demand for apparel, tight raw materials supply and fears of higher tariffs are driving fiber prices up around the world.

Global synthetic fiber prices have continued their upward drift, which started early in 2017 in key textile regions, according to data from fiber consultancy PCI Wood Mackenzie. In addition, the gaps between price levels in Asia and the west continue to widen.

So far in 2018, synthetic fiber prices have risen by more than 8 percent, on top of a 13 percent spike in 2017. If the current pace persists, we can expect fiber prices to increase in 2018 by even more than they did last year. 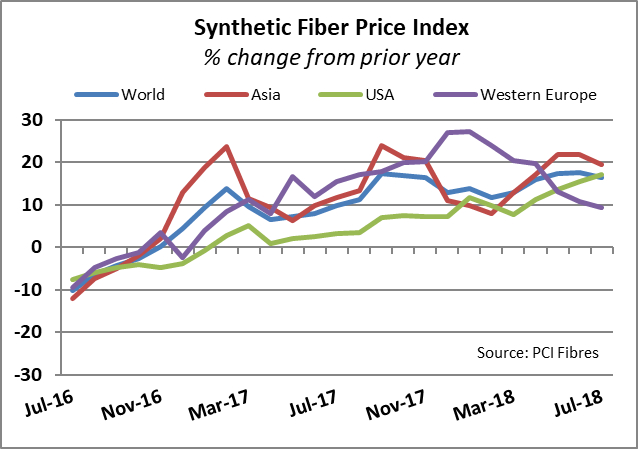 The Synthetic Fibers Index, which has risen by double digits every month this year so far, has been stimulated by increased global demand for apparel and textiles and by higher oil, intermediates and labor costs. Fears of a trade war as a result of proposed U.S. tariff increases on fibers, fabrics and finished soft goods have helped to stimulate demand in the short term.

Oil prices have increased by 14 percent in the first seven months of the year, with Brent Crude at almost $75 as of the end of July. Crude oil rose about 20 percent to $66 per barrel in 2017, which together with strong demand for man-made fibers, allowed producers of intermediates and fibers to increase their prices. Although at the end of 2017 energy experts were forecasting that tight supplies would ease, and oil prices would settle down somewhat in early 2018, that hasn’t happened.

In Asia, the world’s largest fiber-producing region, synthetic fiber prices rose by 7 percent in the January-July period, finishing July 19 percent higher than the same month last year. The summer months in China tend to be a bit quiet for the polyester business, but demand has remained firm this year and inventories low. In addition to stronger-than-expected demand for autumn/winter apparel, which is shifting toward synthetics thanks to consumer preferences, precautionary orders placed in anticipation of expected tariff increases have caused supply chain distortions and upward pressure on capacity utilization and fiber prices.

Demand for viscose and spandex remain stable despite spandex’s presence on the list of fibers slated for increased U.S. import tariffs. So far there has been no formal confirmation of the completion of the Shandong Ruyi $2 billion acquisition of Invista’s fiber business, indicating the complexity of the deal might be causing it to take longer than expected to close.

Acrylic fiber producers expect a bump, so to speak, from the shift to the two-child policy in China, since acrylic figures prominently in blankets, hats, apparel and other soft goods products for babies and small children.

Asian synthetic fiber prices remain more than 21 percent below the world average, down from 20 percent below as of the end of 2017.

The European synthetic fiber price index has increased 4 percent year-to-date. European prices are nearly 18 percent above the global average, helped by strong demand and capacity utilization for polyester filament and nylon. Although demand for polyester and nylon filament in Europe remains strong, margins are tight due to raw materials shortages.

Synthetic fibers prices increased by 14.5% percent in the first seven months of the year in the U.S., the most of any major producing region. U.S. synthetic prices remain more than 53 percent above the world average. The U.S. market for polyester filament and staple remains strong for this time of year, but a number of forces majeures are impacting the polyester supply chain in North America, including an explosion and fire at Alpek’s PTA plant that affects nearly 20 percent of the market for the intermediate, and BP’s continued interruption in the U.S. Nylon supply became tighter after a fire at Ascend’s Pensacola, Florida, site in early July forcing a two-week shutdown of polymerization units.

During the first seven months of the year, the gap between prices in the most expensive region (the U.S.) and the least expensive (Asia) widened a bit. 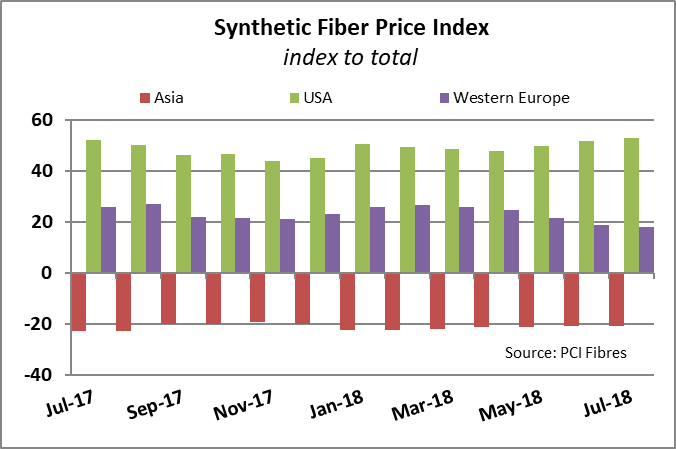