Palmetto Synthetics, churning out 100 million pounds of polyester and nylon fiber a year in the quiet woodlands of Kingstree, S.C., has withstood the onslaught of imports, the Great Recession and the current trade war to be a vital supplier to many to yarn manufacturers in the state, the region and around the world.

David Poston, president of the 21-year-old company, told Sourcing Journal during a tour of the 350,000-square-foot facility that it is a zero-waste manufacturer, recycling and reusing both water and materials.

“The only water that leaves this facility is when somebody flushes the toilet,” Poston said.

The company produces specialty synthetic fibers in relatively small lot sizes, and everything is a value-added product, he said. That could be a color, antimicrobial, flame retardant, a novelty polymer–“we’ll make a fiber out of any thermoplastic,” he said.

“Mostly, we have developed each market with our customers,” Poston explained. “For many years now, we sit down with our customers and ask them ‘what is it that you want or need,’ and then we discuss how to develop it.”

About 40 percent of Palmetto’s business is in the automotive sector, basically anything that has a fiber in it, and about 40 percent is for textile yarn spinning that goes into making apparel, nearly all for U.S. manufacturers such as Parkdale, Frontier Mills, Cap Yarns and National Spinning, with the rest for industrial use.

These companies are all members of the National Council of Textile Organizations, of which Poston is Fiber Council chairman.

Hey Retail! Uncle Sam's Hand Is In Your Pocket

“The fibers we produce can go into any kind of garment, usually some sort of high-performance garment or hosiery, mostly athletic socks,” Poston said.

The company also exports about 20 percent of production to places like Mexico, South Korea, China, Brazil, Bahrain, Russia and all of Europe.

All Palmetto fibers can be made with recycled materials, he noted, so the company gives its customers a choice between 100 percent virgin fiber or 100 percent recycled, or any combination of the two.

“We’ve always been a zero-waste company and recycle all of our waste,” Poston said, but that wasn’t always widely known. “We never really told our customers that’s what we were doing. I’m not really sure why, except at the beginning it wasn’t always important or desirable.”

He said recycling has gone from “using trash to something that’s respectable” and often desired from an environmental goal and image standpoint.

“It actually costs us more to bring in recycled materials and in years past nobody wanted to pay more for it,” Poston said. “Now, companies have the mindset that if they want recycled, they’re going to have to pay more than virgin. Now, recycled is a sexy thing to do. We think it will last because the millennials have bought into it and care about it. Now it seems to have legs.”

During a tour of the facility, Poston pointed out how nearly all stages of Palmetto’s production have become computer-controlled and automated to the point that two of its lines operate with no employees at all. The company does employ around 300 people combined over shifts, but “there’s no manual labor” involved, he said.

“Most of the people are there for quality control and monitoring,” he said.

Poston also pointed out the complex methodology Palmetto uses to retrieve and recycle the water used to process the fiber. He explained and demonstrated how fiber that is extracted during the manufacturing process for quality and other reasons is repurposed and used to create new polyester and nylon chips that are turned back into new fiber. 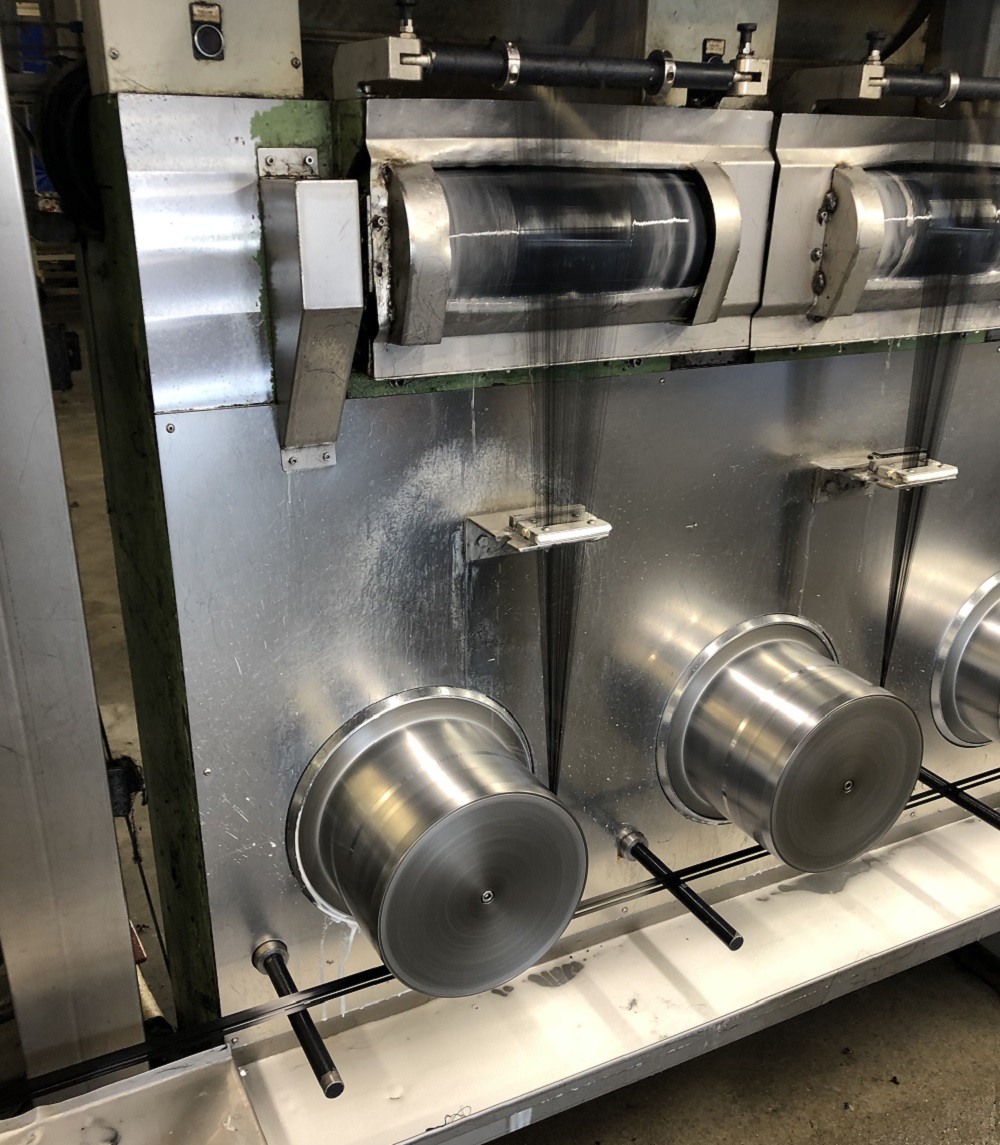 PaImetto makes fiber in a wide array of deniers, as thin as silk to the widest denier range available in a variety of cross section options. The company has worked with some materials to limit potential fiber shedding that ends up in the waste stream and is open to further testing or implementation, but Poston feels “the jury is still out on the science” of what exactly is happening and how it can be alleviated.

Poston said he’s seen a resurgence of textile manufacturing in South Carolina over the past several years to the point that “most fiber plants are running pretty strong that were on hard times.”

“There was a lot of imported fiber being imported in the nineties and early 2000s,” he said. “The economy certainly helped all of them and certainly some of the antidumping actions and tariffs have helped, as well.”

Palmetto is “a little bit insulated from some of that,” he said, “because we make such small special things that’s hard to do from China. It’s hard to send 10,000 pounds of colored fiber over here because if it doesn’t match, the customer is in deep trouble. Whereas, if we send a color to a customer and it doesn’t match, we can produce it overnight and ship some more tomorrow.”