“Blue is for boys” and “pink is for girls” might still fly in some circles, but a new children’s wear startup is betting that modern parents and their similarly open-minded ankle-biters will embrace T-shirts and jeans that swap gender politics and social constructs for youthful, whimsically spirited design.

Alike launched last month from its home base in Chicago as a direct-to-consumer children’s apparel brand offering a small collection of unisex garments boasting a Made-in-America supply chain. Co-founder and consummate creative Melissa Serpico Kamhout first got the idea for the brand after giving birth to fraternal twins and witnessing her son’s interest in clothes typically deemed off limits for his gender, said fellow co-founder Kaitlin Meyer, a University of Chicago MBA grad who had previously worked in finance with Kamhout’s husband.

When even Kamhout’s daughter would tell her twin that certain clothing is“not for you,” that’s when the light bulb went off, Meyer added.

From Sweden’s Mini Rodini to Bobo Choses out of Spain, Europe is home to a number of sustainable brands adopting a modern aesthetic and contemporary approach to dressing children, largely unencumbered by strictures of gender, according to Meyer.

The U.S., however, has been slow to follow suit.

Assigning certain categories to certain clothing is one of the many reasons why Meyer believes Americans are so quick to discard clothing. Unraveling these conventions, she says, could help brands produce—and parents consume—more sustainably. “Let’s not put a label on things,” Meyer said.

Genderless apparel makes a compelling argument for clothing multiple bodies in a multiple-child household, she added, because a garment free of the “boy” or “girl” label means “you can pass it down” to younger siblings.

Alike takes a similarly mindful mindset in crafting its stateside supply chain. Because cotton is “one of the most polluting crops,” often packed with pesticides and GMOs, the brand only uses fiber that’s GOTS certified for T-shirts sourced from Los Angeles fabric, and digitally printed at a factory in the city using non-toxic inks, Meyer said.

Priced at $52 apiece, each T-shirt bears an eye-catching design that wouldn’t look out of place on a boy or his sister. The robin’s egg blue background of the Flowers tee highlights oversized white flora in a print that’s both “tropical and modern,” Alike says on its website, while eyes, stars and a punch of color round out the remaining tops in the inaugural collection.

Alike also offers what Meyer calls “one-of-a-kind upcycled jeans” that Kamhout sources from a Salvation Army store in Chicago and restores—and destroys—lovingly. “We don’t know stereotypes,” she added, “but we also know that every child wants to be unique.”

The five pairs currently offered on its website range in size from 4 to 16, each given a new look with bleach effects and distressed finishing. 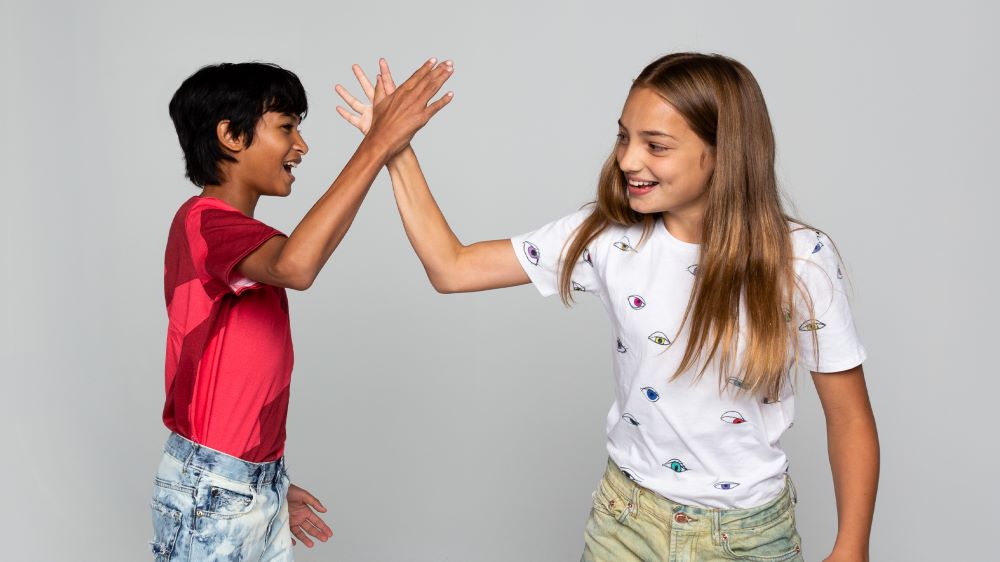 The upcycled denim is sourced from both boys’ and girls’ jeans, though that prior gender prescription matters very little because “it’s not like they have curves at that age, they’re all pretty straight and thin,” Meyer noted.

Like many new brands, Alike’s approach to sustainability infuses virtually every aspect of its businesses. Mindful of limiting its environmental impact, Alike ditches the standard plastic polybag when shipping batches of shirts from the L.A. factory, opting for compostable packaging instead.

And the company is interested in extending its social impact—which currently involves donating a portion of each sale toward Blessings in a Backpack to address childhood hunger—to potentially partnering with Blue Tin, a Chicago-based, women-led production facility providing sewing training and jobs for immigrants and refugees.

“As we grow we’re looking to…shift [production] there,” Meyer said of Blue Tin, which launched earlier this year and “pays wonderful wages.”

Keeping close tabs on every step of the supply chain matters when striving to create a brand that stands for something, she added.

“If you’re building a sustainable brand and…you’re giving back to the community, you don’t want to be outsourcing somewhere to make it cheap,” Meyer explained, adding that Alike’s commitment to U.S. sourcing and manufacturing will never waver.

Taking a shortcut for the sake of costs alone would be antithetical to Alike’s “mission and foundation,” she said.

Alike is already planning for future product drops. It has a long-sleeve shirt in development at the factory, along with a zip jacket and jogger pants, all of which will incorporate organic cotton and launch late next year, Meyer said.

Forging relationships with domestic suppliers offers an advantage not just with time zones that lend themselves well to quick-turn collaboration, she added, but also with “trust and partnership” that can be difficult to find with faraway factories.

Bootstrapped for now, Alike will likely look to raise funds further down the line, once the brand has gained traction. And pop-ups could be a savvy precursor to any larger retail ambitions, whether that’s securing boutique clients or wholesale partnerships with department stores, Meyer said. Alike is already planning to host “mom nights” to gather customers and prospects with the goal of learning what’s on their minds.

As businesses like Goop and The Honest Company gain greater exposure and win over eco-conscious and clean-living consumers, Meyer believes a growing number of parents will be happy to invest in children’s clothing that’s made responsibly and allows kids to express themselves.

The millennial generation has been vocal about letting people be who they are, even if it flies in the face of conventional norms.

“So why don’t you let your kids make that choice rather than society?” Meyer said.