In recent years, digital natives like Asos and Boohoo and online marketplaces from Farfetch to Mytheresa have shined a spotlight on how the e-commerce fashion experience can evolve. But one brand—international fast fashion retailer Shein—has yet to reach household-name status, despite its popularity among young shoppers.

Shein, a China-based direct-to-consumer brand with few details on its background, controls its own production chain, including design, procurement and manufacturing. Yet although there is little known about the detailed operations of the company, its investors or its management, it is clear from various data points that the retailer is a massive global hit when it comes to mobile shopping, outperforming the rest of the market in app downloads.

In fact, the fast-fashion retailer, followed by more than 19 million on Instagram, recently surpassed Amazon as the most installed mobile commerce app.

On May 11, Shein became the most installed shopping app on Android in the U.S., and six days later took the top spot on iOS as well, according to mobile app tracking firm App Annie.

Shein’s app had briefly topped the Android chart in late April, and previously held the No. 2 spot among shopping apps by iPhone downloads in the U.S. since Feb. 14, App Annie said.

Sensor Tower, a mobile app marketing intelligence firm, says Shein now ranks as the most downloaded shopping app on iOS in more than 50 countries as of Tuesday.

Across all free iPhone apps, Shein is currently the 10th most popular app in the U.S.—Amazon is ranked No. 12—lagging only the likes of popular social media apps such as TikTok, Instagram, Facebook and YouTube as well as Google apps such as Gmail and Maps.

On both Apple’s App Store and Google Play, Shein generated approximately 649,000 downloads on April 27, a new record, according to data from another app intelligence platform, Apptopia. Two days later, April 29, the app also logged about 22 million daily active users (DAU) for the first time. To put these numbers into context, the highs represented a 239.8 percent year-over-year increase in daily downloads and a 175 percent year-over-year increase in DAU.

According to data from SimilarWeb, which tracks traffic for e-commerce sites, Shein is the top fashion and apparel website in the world by traffic, ahead of top e-commerce players Nike, H&M, Asos, Macy’s and Zara in that order. Shein even has them all beat with an average visit duration of 8:36, more than doubling Nike’s 4:05 time and outpacing the next best in the top 10 by almost two minutes—Zara chimed in at 6:56 per shopper visit. 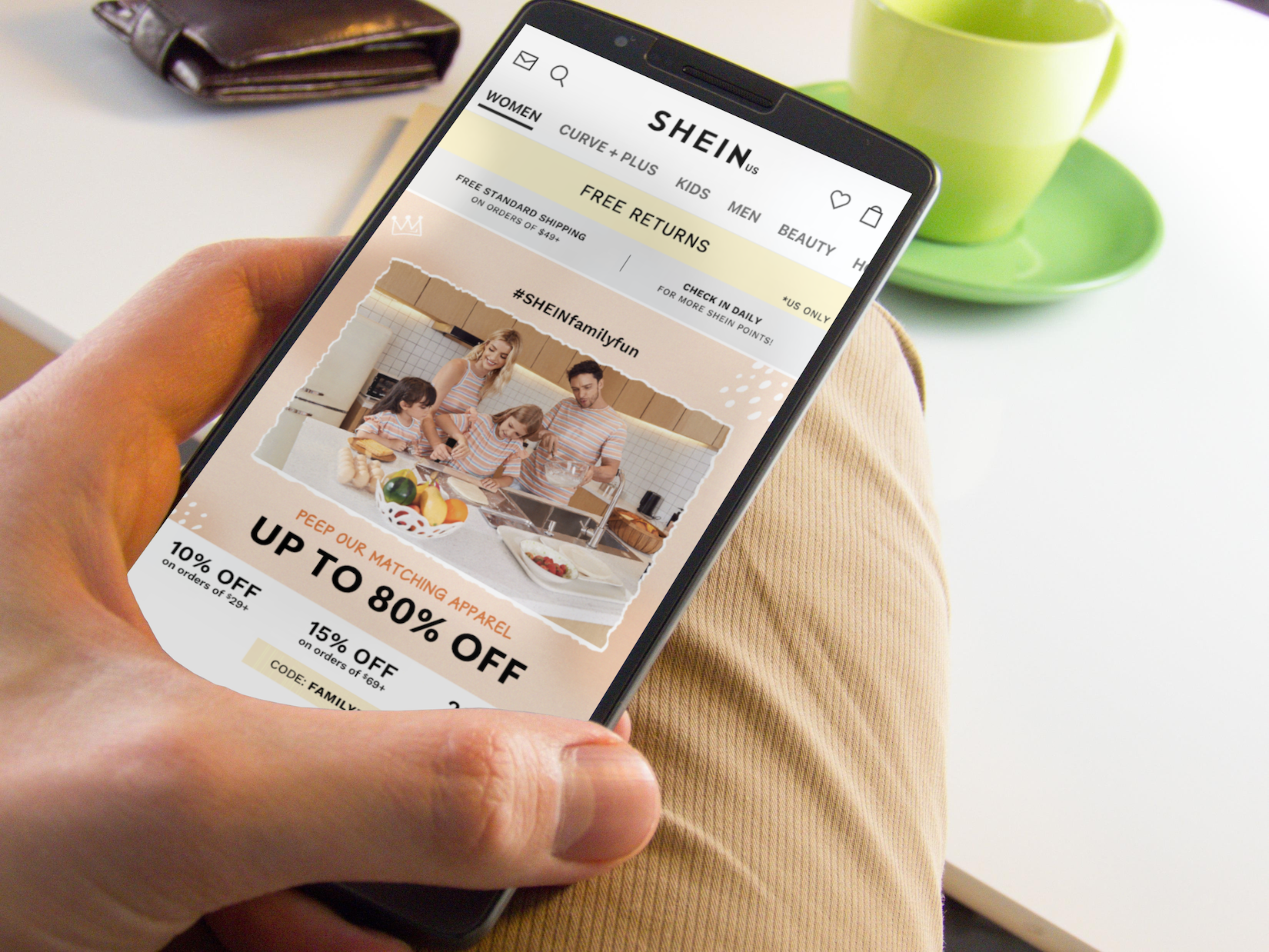 Recent surveys have reflected the interest in Shein, particularly from the coveted Gen Z cohort. In a Piper Sandler survey of 7,000 U.S. teens with an average household income of $76,750, Shein ranked second after Amazon for most popular shopping website. While the disparity was still significant—Amazon got 56 percent of the vote while Shein got 7 percent—the fact that it was there at all above third-place Nike shows just how much of a name the brand has become among young digital natives.

And a Cotton Incorporated Lifestyle Monitor survey of 6,000 Gen Z consumers said that 41 percent of Gen Z shoppers named Amazon as their top site for buying clothes online. Once again, Shein came in second at 14 percent.

While app downloads and site visits don’t tell the whole story, Shein said in December 2020 that it took in 65.3 billion RMB (nearly $10 billion) in total sales. The company reported that it is also the eighth consecutive year of revenue growth of more than 100 percent. But its 2.5-star average score on the Trustpilot consumer review site underscores Shein’s reputation for ultra-trendy fashion where quality and customer service are hit or miss.

The company’s popularity among Gen Z shoppers earned it the nickname “The TikTok of e-commerce” from analyst and author Matthew Brennan, who covers major technology firms in China including Tencent and TikTok parent ByteDance.

Given some of the retailer’s partnerships, the moniker fits. Shein has partnered with pop stars Katy Perry, Lil Nas X and Rita Ora as well as TikTok personality Addison Rae. The company streamed a one-day virtual music festival on May 2 headlined by Nick Jonas and Steve Aoki.

The retailer’s price points heavily appeal to a younger audience. For example, tops often go for less than $10, while dresses can go for under $20.

From a product standpoint, Shein focuses largely on women’s fashion, but also sells apparel, accessories and footwear for men and kids, along with items for pets. And despite its roots in China, the retailer primarily targets the European, American, Australian and Middle Eastern markets.

The only major market Shein doesn’t sell in is India, where its app is currently banned, alongside nearly 60 other Chinese apps.

In January, Shein reportedly put in an offer topping 300 million pounds ($409.7 million) for Topshop and Topman after then-owner Arcadia Group fell into administration, but Asos ultimately won the bid with a total deal value of 330 million pounds ($452.3 million).

Recently, the fashion retailer has even launched a new incubator program, called Shein X, offering up-and-coming designers the chance to design under the Shein umbrella. The program appears to align with Shein’s “do it all” operations, in that it takes accepted designers through the design process from inception to sampling. The program gives each designer a chance to be part of photoshoots, influencer programing, features on the Shein site, blog highlights, dedicated emails, social media posts and in popup shops.