Despite retailers putting less emphasis on Black Friday itself this year—Amazon, Target, Walmart and others kicked off the holiday season early with October sales events—e-commerce orders still climbed 26 percent compared to 2019, according to Bluecore.

Apparel and footwear, however, did not see the same boom as other categories this Black Friday. Of the six categories analyzed, they were the only two to increase less than 35 percent, per Bluecore, whose artificial-intelligence personalized marketing platform helps Tommy Hilfiger, Express and The North Face effectively target consumers and drive strong conversion rates. Beauty led the way, with orders up 46 percent compared to last year. Technology, home and jewelry climbed 43 percent, 42 percent and 38 percent, respectively. 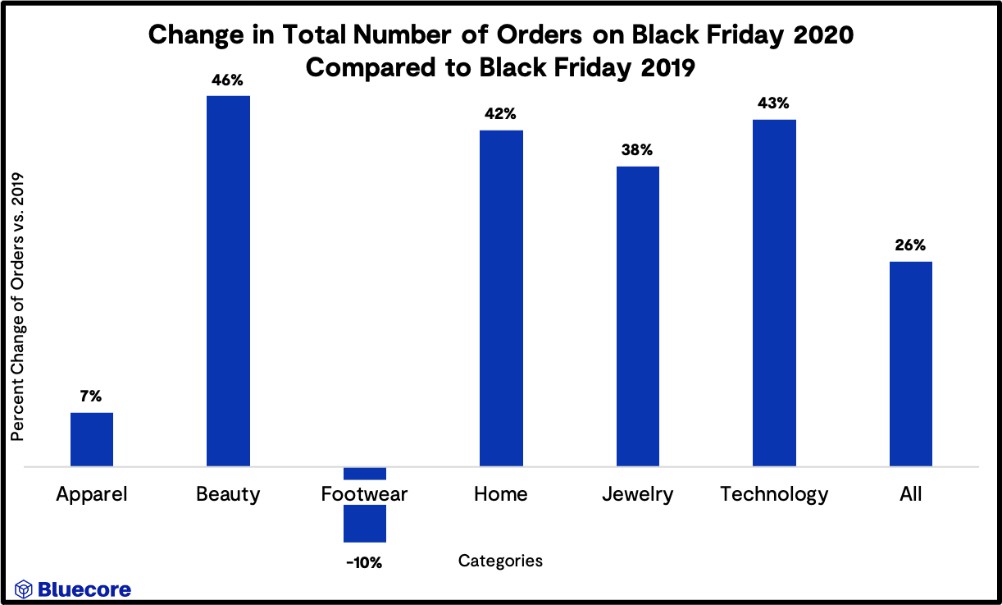 On average, 59 percent of all orders were made by first-time buyers, Bluecore said. Apparel fell below that average, with 50 percent, while footwear came in a little bit above, at 62 percent.

“Retailers are now presented with a massive opportunity to turn these first-time shoppers into repeat buyers before the end of the year,” said Fayez Mohamood, CEO of Bluecore, which culled data from 1.5 billion first-party cookies, 1 billion cart events, 4.4 million unique products, 58.8 million orders and $7.1 billion in total sales across 159 retail brands. “First-time shoppers are most likely to make a second-time purchase within 100 days of their first purchase, so an immediate focus on retention through thoughtful targeting, rather than steep discounts, will be critical to maintaining growth and profitability in 2021.”

As other categories saw notable increases in site traffic this Black Friday—technology led the way with an 18 percent rise—apparel creeped up 1 percent and footwear fell 13 percent.

For its part, Shopify reported $2.4 billion in Black Friday sales—a 75 percent increase over 2019—at the independent and direct-to-consumer brands that use its e-commerce platform. Apparel and accessories stood out as one of the top product categories, it said, along with health and beauty, and home and garden. The average cart price, it noted, rose 11 percent from last year to $90.70.

“This year both October and November have seen unprecedented levels of demands as the seismic shift to online continues unabated,” eShopWorld CEO Tommy Kelly said in a statement. “This surge in digital spend has also been magnified by shoppers bringing forward their Christmas gift buying to take advantage of discounting and to ensure they aren’t caught out by fulfillment delays, which many experienced earlier in the year during the first wave of the pandemic.”

With weeks of shopping to come, the current trends are set to continue, “ensuring Christmas 2020 will be a predominantly digital event,” Kelly said.