If the so-called retail apocalypse had shopping malls on the ropes, the coronavirus pandemic could deliver a bruising blow to a nostalgic relic of American life.

Already battered by the steady ascent of e-commerce, malls have folded by the dozens in recent years, memorialized in dreary photos documenting their sad spiral into irrelevance and disrepair.

A new breed of retail destination has emerged in their wake, however, putting names like Hudson Yards and American Dream on the tip of the industry’s tongue and offering a glimpse of what the future of commerce could hold.

Essential retailers notwithstanding, stores and shopping centers have all but become public enemy No. 1 in the weeks since government authorities shooed vast swaths of the American public into the relative safety of their homes and away from petri-dish places like stores, churches, restaurants, sports venues and anywhere else people tend to congregate and unwittingly share highly transmissible diseases. More than 40 percent of consumers told Coresight Research they’re avoiding or limiting their trips to shopping centers and malls, and more than 30 percent are keeping away from stores in general.

Though the pandemic has dealt a “big heavy blow to shopping malls,” according to University of Maryland professor Jie Zhang, this period of unprecedented disruption might also serve as a “catalyst.”

“This virus is likely not going to go away any time soon, and the one type of place where people will be much more vigilant about avoiding in the longer term will be those crowded, enclosed spaces,” added Zhang, a professor of marketing at the Robert H. Smith School of Business, who focuses on retail strategies and consumer purchasing behavior. “And that’s exactly what traditional shopping malls are.”

Confirmed cases of COVID-19 have surged past 1.2 million globally, according to the World Health Organization’s April 7 situation report, and the U.S. alone—now the epicenter of an escalating crisis—is battling about 375,000 cases. Virus-related deaths in the U.S. topped 1,800 on Tuesday alone, according to data from Johns Hopkins University, a solemn, single-day record compounding the more than 13,000 deaths in the nations and 72,000 fatalities worldwide.

“If a working vaccine isn’t found soon, many more malls will die,” Rosenblum said, “including high-end ones that were previously sort of untouchable,” like the Bal Harbour Shops in her Miami-area hometown.

Brian Kilcourse, also a managing partner at the retail technology firm, sees the outbreak as a threat to the shopping mall’s evolution. “My sense,” he said, “is that this crisis puts a huge roadblock into [retail’s] collective efforts to make malls more attractive by offering ‘experiential’ retail.” If no one wants to set foot inside a mall, there’s little reason to invest in traffic-driving bells and whistles.

While it’s too soon to tell how long the memory of pandemic-era life will stick with shoppers, “the long-term effects of such drastic behavior modification by consumers could be severe,” Kilcourse said. But they could also ignite a new wave of innovation and technology adoption, and further bifurcate retail’s winners and losers.

The Great Recession and upheaval surrounding those tumultuous years gave birth to the phone-first lifestyle now commonplace—nay, indispensable—to the modern consumer. Kilcourse believes a similar phenomenon is currently at play, as “this crisis is accelerating consumer adoption of BOPIS and direct-to-consumer delivery services.”

There’s data to support this theory. Gen X consumers and younger scooped up more clothing, shoes and accessories online than any other category, according to Klarna, whose pay-later technology is used by more than seven million U.S. shoppers. Like Greek mythology’s Atlas bracing the weight of the skies on his rippling shoulders, Amazon and its vaunted supply chain are straining beneath a crush of pandemic-panicked shoppers hoarding household essentials and jockeying for Prime Now deliveries that limit their need to venture out to a store.

Adobe has documented an “incredible upswing in e-commerce spending in light of the COVID-19 outbreak,” John Copeland, vice president of marketing and customer insights for the Bay Area digital marketing firm, wrote in a March 31 blog post. Online shopping spiked 25 percent from March 13-15 relative to the baseline period of March 1-11, according to the firm’s recently unveiled Adobe Digital Economy Index (DEI), which it says offers “consumers, companies and policy makers a dynamic look at the state of the global online economy.” 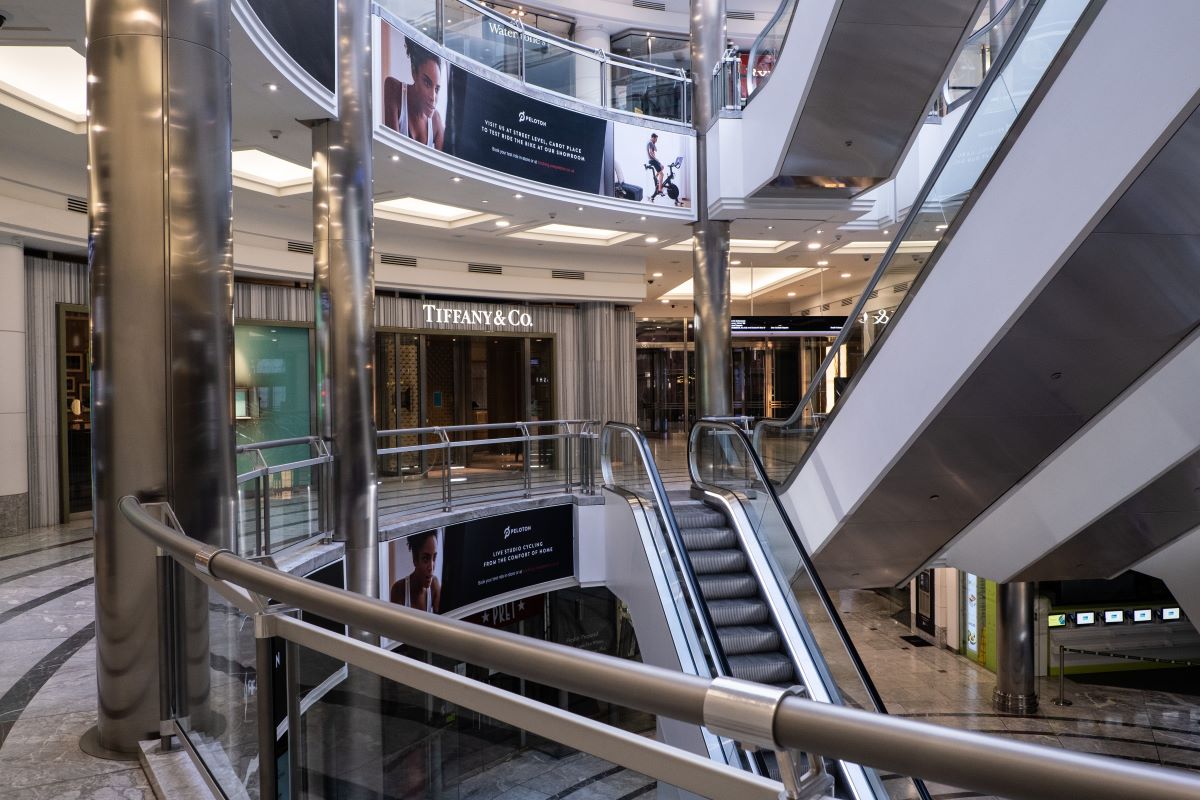 As coronavirus cases piled up and calls for social distancing grew louder, the DEI shows buy online, pickup in store services saw a 62 percent year-on-year bounce from Feb. 24 to March 21. Consumers are unlikely to forget the shopping channels that offered a lifeline through the COVID-19 storm, though e-commerce and the distribution centers that make it tick have not been without their own virus-related concerns.

While BOPIS, same-day delivery and other omnichannel capabilities have been around for years, “the current situation has resulted in many more consumers trying them—and my expectation is that many will adopt them into their routines,” Kilcourse said.

And if they want to stick around for the long haul, retailers must now “resolve nagging issues that they’ve been ‘warned’ about, most notably, enabling real-time and accurate visibility of key information assets throughout the enterprise” like inventory, customer and product, Kilcourse said. Many merchants have rushed to roll out store-based order fulfillment services like BOPIS “without resolving the underlying process and technology issues that get in the way of efficiency,” he added, evident in how grocers nationwide are struggling to manage the sudden rising of customers retrieving their orders from stores.

“If retailers don’t address the underlying issues, they’ll fulfill their way into the ‘red’—destroying per-order profitability with costly and inefficient practices,” he warned.

The number of malls is likely to shrink in the pandemic’s aftermath, but fewer could translate to better.

“This is consistent with some of the trends that we have been watching in the sector,” according to Zhang. “To attract consumers back, shopping malls will need to beef up their entertainment offerings, their recreational offerings and their experiential-based-shopping offerings.”

McKinsey & Company, and Mall of America offered a peek at experiential earlier this year with a tech popup at Manhattan’s Javits Center during the Coterie fashion trade show, demonstrating magic mirrors and product customization—the kinds of perks Zhang believes could dictate retail’s next chapter.

American Dream, the massive, award-winning New Jersey complex hailed by many as the future of the shopping mall, is already looking to boost its ratio of “entertainment-focused tenants” versus retail from 55 percent/45 percent to 70 percent/30 percent, CNBC reported, in what could be a sign of things to come in malls across the country.

Still, Zhang believes malls are best at showcasing “hedonic” products like fashion, beauty, jewelry and wellness-promoting goods, the kinds of categories taking a backseat to life-supporting staples right now. But consumers, confined to their domiciles for weeks unbound, are primed to unleash their pent-up demand for new self-soothing goodies when the economy resets.

“Those who can weather this storm and survive may have the opportunity to thrive in the future when consumers eventually reach a point where they are ready to indulge themselves,” Zhang said. “That’s the bright side.”