Despite the Covid-19 pandemic doing a number on apparel stores over the past year, retailers that successfully navigated the crisis are bouncing back with new openings on the docket. And two of the chains that have benefited from consumers’ newfound interest in the outdoors are expanding their brick-and-mortar bases.

The new Going, Going, Gone! locations, opening in Avon, Ind., and Monroeville, Pa., on May 28, will offer “surprising deals on unique finds” in footwear and apparel, with deep discounts being available at these locations throughout the year. The Going, Going, Gone! concept comes as Dick’s opens another off-price Warehouse Sale location in New Orleans on May 12.

The Warehouse Sale concept also offers deep discounts on customer-favorite footwear and apparel brands, with the retailer advertising price cuts of 70 percent or more on “hundreds of items.” The New Orleans store will provide a temporary popup style experience, although the retailer hasn’t revealed how long it will remain open.

Dick’s Sporting Goods has been on a brick-and-mortar tear in recent months, with five store openings in February and four more in March. The company then debuted an experiential “House of Sport” concept store in Victor, N.Y., which features a climbing wall and a playing field outdoors for high school sports teams, and will open another in Knoxville, Tenn., on May 19.

Following the May store openings, Dick’s will have 731 Dick’s Sporting Goods stores nationwide in 47 states, and 98 Golf Galaxy stores. 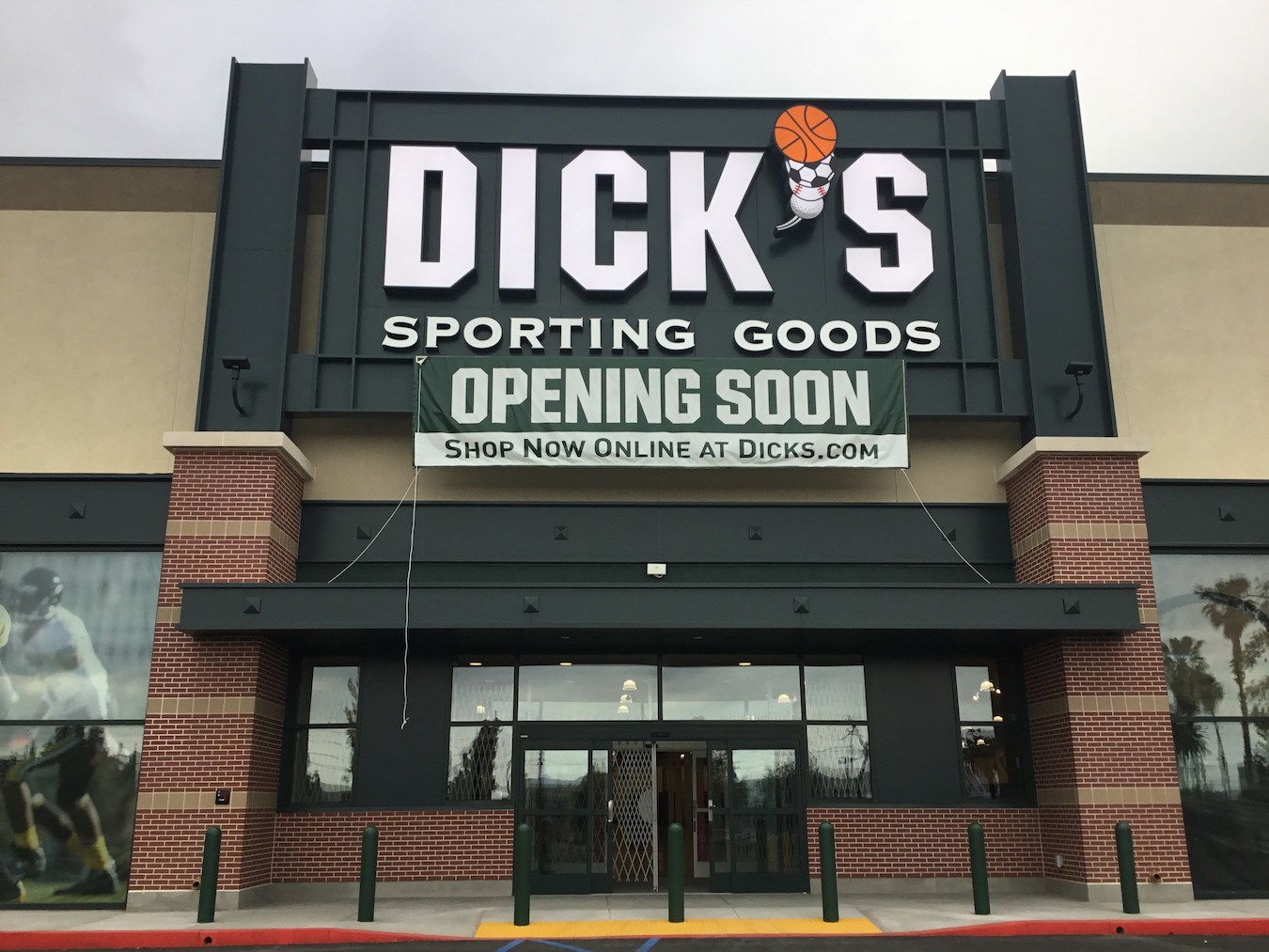 Meanwhile, L.L. Bean will open three new stores in the U.S. by the end of 2021, all of which are launching in open-air locations, the kinds of retail settings that have outperformed enclosed shopping malls throughout the pandemic. The first new retail location is set to open in Salem, N.H., on May 14 as part of an expansive lifestyle center—Tuscan Village—that features stores, restaurants, residential space, trails, greenspace and a pond, viewable from the back porch of the store. It will be L.L. Bean’s sixth store in New Hampshire.

Additionally, new stores are on-track to open this fall in Millbury, Mass., in The Shops at Blackstone Valley—the largest open-air shopping center in Central Massachusetts—and in Amherst, N.Y., in The Boulevard—an open-air center that is home to 50 shops and restaurants. These openings mark the eighth L.L. Bean store in Massachusetts and the seventh in New York state.

“While 2020 posed many challenges to our business, including the temporary closure of all retail stores, we are committed to increasing our brick-and-mortar presence in order to serve more communities,” Stephen Smith, L.L. Bean president and CEO, said in a statement. “We know that a record number of people reconnected with the outdoors amidst the pandemic, some for the first time, and we see these new habits remaining firmly in place going forward.”

L.L. Bean launched a Canadian e-commerce site in 2018, and opened of its first store in the market in Oakville, Ontario, shortly after. The retailer has since opened three more stores in Canada, continuing this momentum with four new store openings across Canada by the end of the year.

The new brick-and-mortar locations are slated to open this fall in Victoria and Burnaby, British Columbia; Dartmouth, Nova Scotia; and Calgary, Alberta. The openings come in response to L.L. Bean’s growing customer base in the market, which doubled in 2020, and continued customer interest in a larger physical retail presence across Canada.

With the openings, L.L. Bean will operate 61 stores in 19 states across the U.S., eight stores in Canada, along with 25 stores in Japan.

Overall, U.S. retailers collectively plan to open 3,344 stores in 2021, according to a March Coresight Research report, well ahead of the 2,649 closures announced so far this year.

The openings are also 39.5 percent more than those that were announced in March 2020, Coresight says. With that in mind, both Dick’s and L.L. Bean are examples of a larger wave indicating that things are looking up for physical retail as more shoppers return to stores.

The retailers also are giving their current locations customer-friendly facelifts in anticipation of returning and new shoppers.

The Soccer Shops are designed to offer service from in-store soccer experts who are specially trained to help customers find the equipment they need and the right fit for their cleats. The Soccer Shops will feature a variety of updated in-store elements including an elevated cleat shop and an expanded selection of licensed jerseys in select locations.

And in the case of L.L. Bean, the 108-year-old outdoor retailer announced that both its flagship store and Hunt and Fish store in Freeport, Maine, returned to a 24-hour schedule on May 3. These stores had operated under limited hours since reopening in May last year after temporarily shutting down.

“My great-grandfather opened our flagship store more than 100 years ago and, in 1951, he implemented our signature 24-hour operating model as a way to accommodate sportsmen and women who would drive through Freeport in the middle of the night to ensure an early start the next morning,” Shawn Gorman, executive chairman of L.L. Bean, said in a statement. “Returning to 24-hour service, extending hours and opening new stores all mark milestones for our organization and communities as we look toward a post-pandemic era and see a continued interest in the outdoors.”

Part of Dick’s Sporting Goods success during the pandemic has been its focus on its private labels, including DSG, the recently launched VRST, Tommy Armour, Calia by Carrie Underwood, Quest and Fitness Gear. Vertical brands brought in $1.3 billion in sales for the retailer in 2020, and now Dick’s is trying to boost its largest brand with a new partnership.

The sporting goods brand is collaborating with celebrity dance couple Stephen “tWitch” Boss and Allison Boss for its family athleisure brand, DSG. To kick off the partnership, the couple choreographed a TikTok dance challenge set to Young MC’s “Bust A Move” to celebrate International Dance Day.

“DSG is a brand that’s inclusive, diverse and gives back to kids in need, which are values we deeply believe in as a family,” tWitch and Boss said in a statement. “DSG is built for every member of the family—so it was a natural fit for us—and there couldn’t be a more fun way to kick things off than by ‘busting a move!'”

Exclusively sold at Dick’s stores nationwide and on dicks.com, DSG apparel and athletic equipment are designed to make movement accessible for “every athlete and every family,” the company says. The line includes a variety of men’s and women’s apparel (sizes range in S-3XL for men and XS-3XL for women) including leggings, tanks, bras, performance tees and sweatshirts/pants ranging in price from $15 to $40. DSG also offers an expansive assortment of apparel and athletic clothing and sports equipment for kids (ranging from XXS-XL).

For every DSG item consumers buy, the retailer will donate 1 percent of the purchase price to The Dick’s Sporting Goods Foundation’s Sports Matter program to help save youth sports.

“Stephen and Allison embody everything DSG is all about,” said Ed Plummer, senior vice president and chief marketing officer at Dick’s Sporting Goods. “Just like DSG, they both actively live life to its fullest and support inclusivity for all athletes, no matter their size, skill, age or budget. We’re excited to partner with the Bosses and look forward to all of the fun things we have planned together.”