Disney once again might be shrinking its own store experience in North America, but in doing so, it looks like the entertainment giant is replacing its own brick-and-mortar presence with that of one the nation’s biggest and most bankable physical retailers.

WDW News Today, which reports on news related to Disney theme parks and consumer products, said “nearly all” of the remaining Disney Stores across North America will close by the end of September, with the exception of a few Disney Store Outlets.

Though the report said Disney would make an announcement on the impending closures last week on Thursday, the entertainment giant has been mum on any store-closing news. Disney Parks, Experiences and Products didn’t immediately reply to a request for comment.

With revenue tanking through the Covid-19 pandemic as Disney saw traffic decrease across its stores and world-famous theme parks, the company originally announced earlier this year that it would shutter 60 of its then-300-plus global stores to focus on digital retail with ShopDisney.com. The e-commerce commitment would prioritize adult apparel collections and artist collaborations, trend-forward streetwear, premium home products and collectibles.

Outside the Disney Stores, the company’s brick-and-mortar presence extends to numerous ventures, namely in its theme parks, which are home to more than 600 Disney Parks stores. The company’s additional shopping experiences include shop-in-shops, lifestyle and outlet locations and third-party retailers around the world.

While the closures may be a bummer for many customers who enjoyed the experience of the stores and the “magical moments” they provided, Disney seems to have found a brick-and-mortar mastermind in Target—a partnership that is proving to be very successful so far.

The mass merchant said it will expand the Disney Store at Target concept to more than 160 of its locations across the country by the end of the year. Currently, there are 53 small shop-in-shops inside Target stores, as well as a co-branded online store.

Target started rolling out the Disney shops in October 2019 when the first 25 locations opened. The Disney shops, averaging 750 square feet, are usually adjacent to Target’s kids clothing and toy departments.

The mini stores have music, interactive displays, photo opportunities, and a seating area to watch Disney movie clips and to play games.

A list of the 107-plus Target stores that will get a new Disney shop has not yet been made available. Shoppers will find top toys from popular Disney properties, including Star Wars and Raya and the Last Dragon. 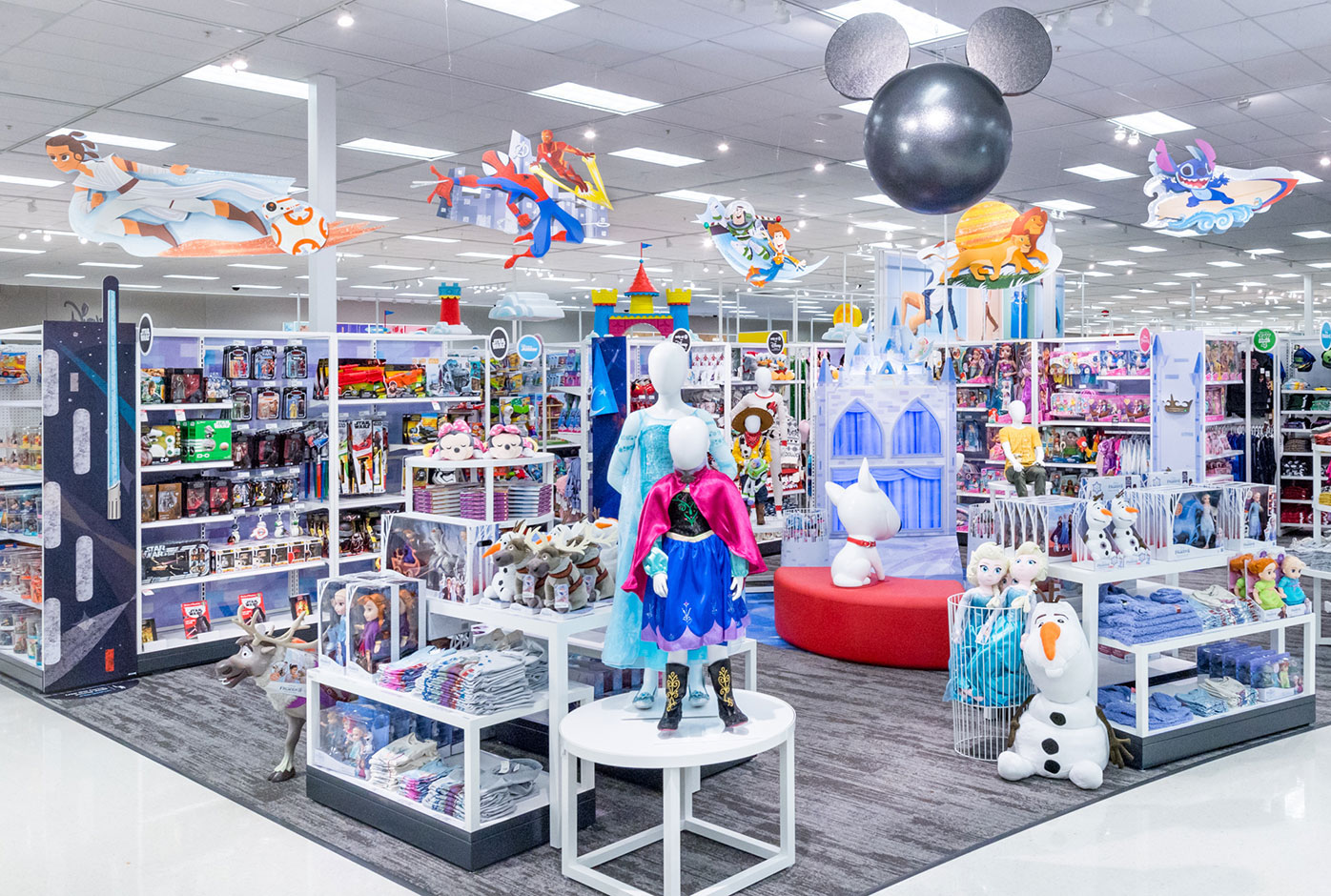 The Disney partnership is part of Target’s larger toy department expansion and comes at a time when retail’s biggest names are looking to capitalize on this lucrative category. On a company earnings call, Target’s chief growth officer Christina Hennington told investors that toy sales grew in the “low-20 percent range” year over year during the second quarter.

Even Macy’s is trying to get in on the action, recently revealing that it is bringing “full-out [toy] shops” into 400 stores in 2022 as part of yet another resurrection of the Toys “R” Us brand, with the department store expecting to quintuple the size of category. A larger assortment of Toys “R” Us merchandise is now available on Macy’s website.

“It was an opportunity for us to look at what the entry category was for Toys ‘R’ Us kids that are now millennial parents,” said Jeff Gennette, CEO of Macy’s in a recent earnings call. It was also an opportunity for the company’s “under-40 strategy to go after this category…recognizing that those footsteps or those eyeballs will translate into other purchasing.”

Toy sales on the whole weren’t slowed down at all by the Covid-19 pandemic, with the jumps over the last two years seeing fairly consistent growth, perhaps giving both mass merchants and department stores like more incentive to pursue these kinds of partnerships. The closure and liquidation of Toys “R” Us stores throughout 2018 and 2019 created a major market share gap that many retailers are aiming to fill.

Across the top five toy properties sold in the first half of 2021 across 12 top global markets, Pokémon was the largest property, followed by Barbie, Star Wars, L.O.L. Surprise! and Marvel Universe.

“We are delighted to report continuous strong growth for the toy market globally,” said Frédérique Tutt, global toys industry analyst at The NPD Group. “Even though Covid-19 restrictions are easing in most countries, consumers continue to turn to toys and games for their entertainment. Whether it is collectible cards, building sets or outdoor toys, demand is still very strong, which is promising as the industry is now preparing for the holiday season.”

Another toys industry advisor at NPD Group, Juli Lennett, said signs point to the toy industry continuing to outperform pre-pandemic time periods, in what she referred to as “seismic September” and beyond.

However, ResearchandMarkets’ Q2 report on the global toys market, published Monday, warned that supply-chain disruptions, U.S.-China trade tension, and the crackdown in Hong Kong, the “home of the toy industry,” are straining the toy sector, which sources 86 percent of its products from China.

In conjunction with the Disney partnership, Target announced the return of its Bullseye’s Top Toys list for the holiday season, with the toys ranging from Lego to L.O.L. Surprise! alongside a range of new additions. This includes Target’s exclusive, 70-piece toy collection with FAO Schwarz, of which 85 percent of items are new this year, as well as toys from Paw Patrol and Barbie, and the Zoe Doll by Black-owned business Healthy Roots, which inspires girls to love their curls through hair play.

Disney, meanwhile, expanded its range of adaptive character costumes last week, leaning into the consumer call for accessible and inclusive options. New this year, fans of Black Panther and Stars Wars: The Mandalorian can dress up as their icons and outfit their wheelchairs accordingly. Last year, the company launched its first batch of adaptive and accessible costumes with classics and modern favorites like Cinderella, Buzz Lightyear, and The Incredibles. And last month, JCPenney bowed an adaptive children’s apparel collection ahead of the back-to-school season.