Alibaba tries to make its 11.11 Global Shopping Festival bigger and better every year, with this year’s iteration expected to top last year’s $74.1 billion haul. The shopping extravaganza presents a tantalizing opportunity for brands to crack an underpenetrated market and enter new sales channels, like the Chinese e-commerce giant’s Tmall marketplace.

DVF is one of the ultimate success stories in bringing a global fashion brand to Chinese consumers, and is now one of the more seasoned brands in the market, having launched in the country in 2010.

At a panel discussion at the SoHo House in Manhattan Wednesday, DVF CEO Gabby Hirata pointed to her own experience in stressing the growing importance of the fashion brand’s strategy in China. In fact, sales from China comprise 51 percent of DVF’s global revenue.

Hirata herself was born and raised in Beijing before moving to the U.S. for her undergraduate degree. Hired as the head of APAC in January 2020, Hirata was promoted to president and CEO to kick off 2021, and the company has gone full speed ahead in catering to China’s ravenous young luxury market.

First soft-launching on Tmall prior to the 11.11 Shopping Festival in 2019, the brand offered the same product line on the marketplace as it did on its own site. But upon learning more about the customers on the platform, it was clear there was room to adapt the experience. For one, the age range was different, with Tmall customers averaging 25 years old, significantly younger than the 27 to 45 range of DVF‘s established audience.

“We initially thought she wanted something a bit more affordable, so maybe we’ll give her something a little bit cheaper, like simple Tmall-exclusive T-shirts. And then we quickly learned ‘Oh my god,’ the 25-year-olds who came to the DVF store on Tmall actually wanted something easy to wear, but iconic and recognizable DVF, a.k.a the wrap dress. So we started giving her a simple solid-color wrap dress that is in our signature fabric, and that suddenly became the hero product.”

The DVF team demonstrated how a livestreaming event works at its Meatpacking District flagship store with a broadcast accessible via Tmall. Livestreaming has been a major part of DVF’s brand expansion in China, with Diane von Furstenberg herself conducting a broadcast for online shoppers during Alibaba’s 6.18 Mid-Year Shopping Festival.

This time, to kick off the 11.11 event, Hirata and the designer’s granddaughter, Talita von Furstenberg, hosted the stream throughout the store, showcasing some of the dresses and jackets on offer via the Alibaba Cloud’s livestreaming platform.

The stream was displayed on a digital screen, giving viewers a look at both the real-life interactions between Hirata and von Furstenberg and the feed at the same time. Attendees could see commentary by the shoppers in real time as they typed messages in the chat. 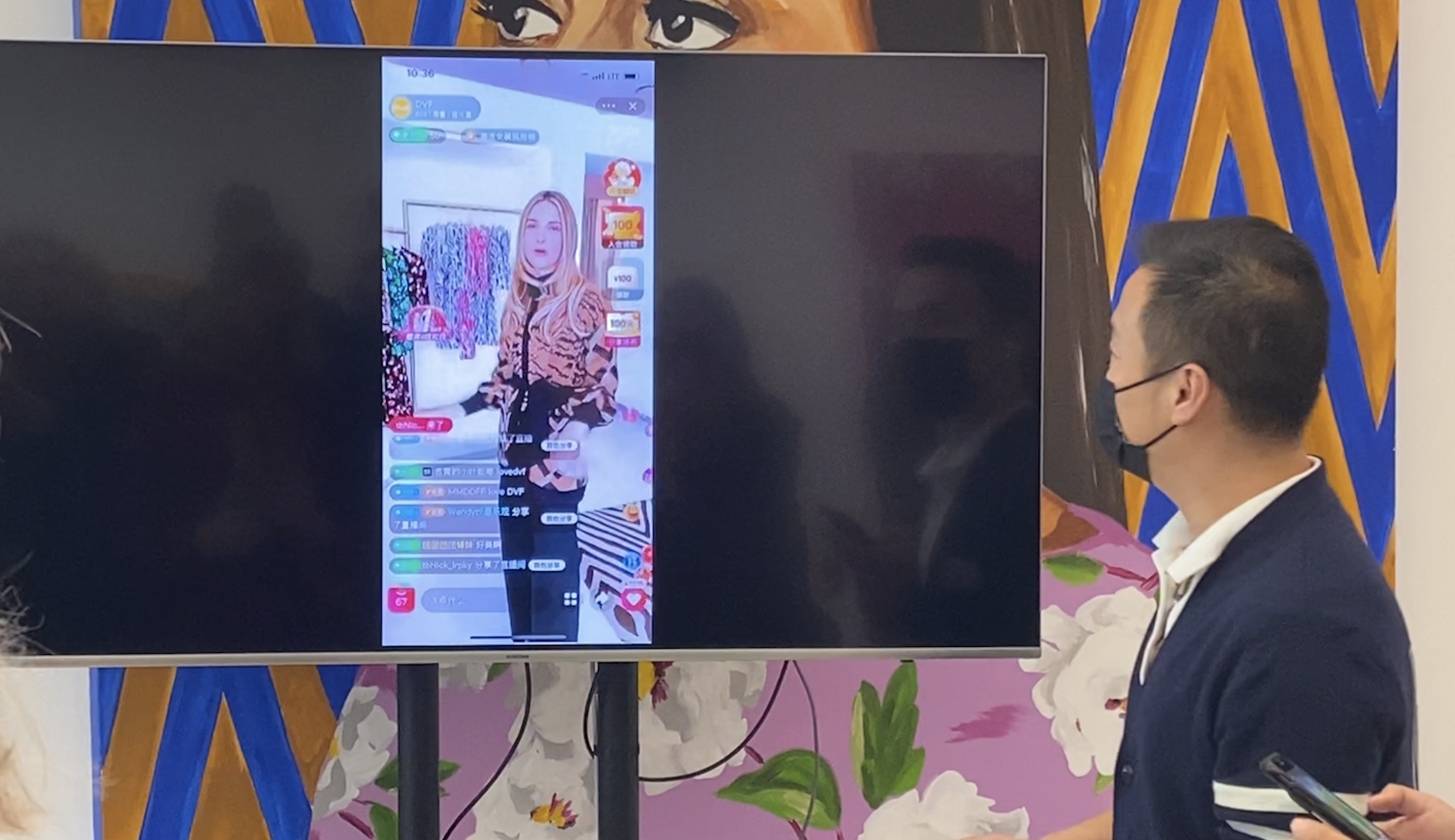 As part of the stream, Hirata and von Furstenberg held a live “focus group” comparing a teal dress and a red dress, which viewers could vote on in real time by typing “1” or “2” in the chat part to cast a ballot for their favorite. A brief store tour gave at-home viewers a taste of the newest fashion on display in the flagship.

How Mansur Gavriel, Supergoop! and Basq NYC have benefitted from Tmall

DVF is just one of 290,000 brands that participated in the 11.11 event, which offered roughly 14 million deals on Tmall. At the panel, executives from luxury handbag brand Mansur Gavriel, skincare label Supergoop! and pregnancy-safe cosmetics line Basq NYC shared their experiences on Tmall.

Mansur Gavriel launched on Tmall for the first time in September after building awareness in China over the past two years and gaining a following from Chinese consumers living both in and out of the country, according to CEO Isabelle Fevrier. After catching the eye of influencer “Mr. Bags,” who was a fan of the brand when it launched in the U.S. 10 years ago, the handbag seller turned to “Key Opinion Leaders,” or “KOLs” to help market the company’s products.

“We found that they resonate well beyond China, so now it’s about how we stop being so focused almost exclusively on the U.S. or specific market, but think much more globally in terms of which influencers we can work with on a global basis,” Fevrier said. “Because they do resonate outside of sometimes specific markets that we associate them with. We’ve been here just two months. Imagine how much we’ll learn in about a year from now.”

Following in the footsteps of DVF’s iconic “hero product,” Supergoop! CEO Amanda Baldwin pointed to the company’s top skincare products, citing Unseen Sunscreen as the centerpiece of a brand dedicated to UV protection.

The popularity of the clear, scentless sunscreen powered the brand to the No. 1 skincare launch on Tmall last year.

And Basq NYC’s president and co-founder Lauren Parisier highlighted Tmall’s Go Global “Pitch Fest” as a key driver of the support that has enabled the brand to participate in 11.11 for the first time. Basq NYC was one of seven winners ahead of the shopping bonanza.

“Pitch Fest is that moment where as a small brand, we got interviewed to tell our story, and the opportunity to actually genuinely share what makes you special,” Parisier said. “You don’t really get that opportunity that often for somebody that wants to understand everything about the product, but also the founder. So what’s my story? Why do I care about pregnancy so much, which I do. You want people to feel good, and you want people to have an experience of connecting with their body.”