That’s the verdict from a cross section of retailers and trade associations on both coasts as the nation heads into one of the most divisive presidential elections of our lifetime.

With less than a week until Election Day, high-end retailers from Manhattan to Beverly Hills are taking precautions to guard against the potential for civil unrest at a time when many are still desperately hoping to recoup the mountain of lost sales from Covid-induced lockdowns. Some retailers are still uncertain as to what their exact plans will be, with many considering boarding up their stores, closing early or even not opening at all.

Sources said a conference call took place last week among many high-end luxury brands in Manhattan to discuss safety precautions. One person said that while everyone on the call was anxious, it was the high-end luxury brands—particularly along Madison Avenue—that were most concerned about the prospect of rioting and protests. These names were largely the ones targeted by the heavy looting that occurred this past summer as social unrest grew, especially in New York’s SoHo shopping district.

Most stores contacted along Madison Avenue, Fifth Avenue and in SoHo are taking a wait-and-see approach and said they plan to open on Election Day, but many associates also said they probably won’t know until the day before what the final decision will be.

Along Madison Avenue above 57th Street, luxury women’s fashion boutique Ludivine expects to remain open, although one person said that “there’s a chance” the store might board up its windows. A salesperson at Zimmermann, the luxury Aussie label, said the store “will likely board up,” but isn’t sure if the shop will open, or open and then need to close: “That’s still up in the air.”

Several of the stores reps recapping last week’s group conversation pointed to Frame as one of the retailers that is considering boarding up the store and possibly closing for three days. “We’re still unsure,” a store associate for Frame said on Tuesday. This individual said that if the store decided to board up, it will likely be closed for however many days it remains in that condition.

Along Fifth Avenue, a Tiffany store associate at the store near Rockefeller Center—the flagship at 727 Fifth Avenue is closed for renovation—said the plan is to open from 10 a.m. to 6 p.m., “but that could change closer to Election Day.”

At the A|X Armani Exchange in the Olympic Tower, a saleswoman said the plan is to open, but urged consumers to “call first. We are on Fifth Avenue and sometimes there are protests.”

The Miu Miu store at 100 Prince Street hasn’t yet determined what it will do. “We might be closed. There’s some talk we might be boarding the store for a few days. SoHo is very affected,” a salesperson said.

“Based on how the riots were handled during the summer, there’s a been a lot of coordination with security,” said Daniel Hodges, a futurist and CEO of Consumers in Motion, who also runs retail tours for business executives.  “New York City is prepared for almost anything. They’ve been through two months of [social unrest] so everyone pretty much feels like the folks in charge have a real sense on how to deal with it, and should [disruption] occur, it will be dealt with swiftly and effectively.”

Joseph J. Carella of Joseph J. Carella Associates Inc., a spokesman who represents the 34th Street Partnership, a nonprofit business improvement district, said that the partnership is not recommending that stores preemptively board up.

Matthew Bauer, president of the Madison Avenue B.I.D., said, “We have tremendous faith in the NYPD in safeguarding the city, and we have not heard of any specific threat to Madison Avenue retailers.”

At that briefing, Terence A. Monahan, NYPD’s Chief of Department, said: “As we continue to facilitate peaceful protests across the city, currently we have no known threats of disruption and we do not expect any during the course of the next few weeks…. It is no secret that this election is more contentious than in years past, for that reason our plan also includes the ability to respond to any incident that might occur. Beginning on Oct. 26, we will have hundreds of additional cops in uniform, city-wide, who will be at the ready should they be needed.” 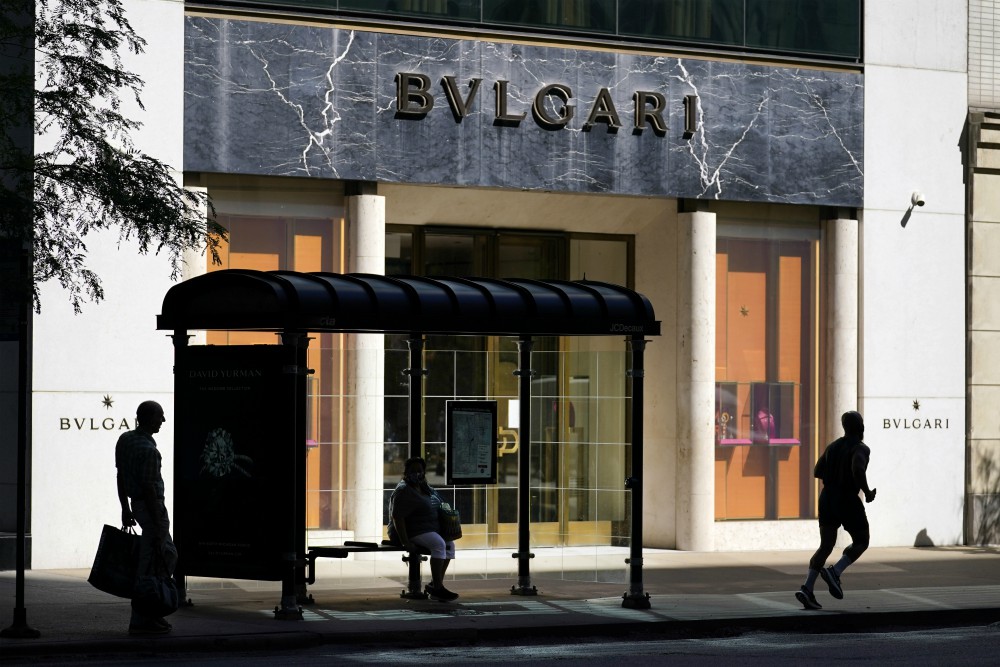 A spokesman for Chicago’s Magnificent Mile Association, whose members include Bulgari, Burberry, The RealReal and Gucci, said, “We have not recommended that retailers or commercial properties board up ahead of the election, however several properties have received that directive from corporate or ownership. Obviously, the election is of concern nationwide, but the plans here in Chicago are the result of long-term planning for safety and security downtown, not just a short-term reaction.”

The association provided safety recommendations to its members, which included: conducting a survey of the property, ensuring all access points are secured, confirming that lights are in good working order; securing free-standing assets, i.e. furniture or garbage receptacles; turning security cameras toward the public way, and being prepared to coordinate with the Chicago Police Department to send video footage if needed.

Over on the West Coast, brands and boutiques across the state of California are also preparing for the impact the election could have on their ability to conduct business.

On Monday at a briefing on public safety and police reform, Los Angeles Mayor Eric Garcetti told Sourcing Journal that he “does not anticipate” that social unrest surrounding the election will have an impact on businesses during what should be the busiest shopping season of the year. “We’ve seen in recent weeks where there has not been any uptick in violence leading up to this—that’s not our expectation,” he said. “There are always some who will take advantage of a moment, but we are well prepared for that to protect people’s right to vote and protect businesses.”

The mayor urged the city’s citizens and business owners to avoid buying into “rumor intelligence,” adding, “If I had a dollar for every tweet that said that this group or that group was about to invade here or there, I’d be rich.”

The California Retailers Association has taken a slightly more cautious stance, according to group president Rachel Michelin. The organization, while not actively pushing a campaign to address the potential for violence and looting around Election Day, has heard rumblings of concern from its members. Michelin has had conversations with California’s state administration in recent weeks and said the issue is on its radar.

“Not knowing what happens next week or frankly when we’ll know for sure, I think it’s unfortunate that now part of doing business is that business owners have to put up plywood to protect themselves,” she said. “I think you’re going to see businesses doing that here in California just because they’ve learned,” Michelin said, referring to the social upheaval that took place earlier this summer.

“We’re hoping that we don’t see that but I think we probably will,” she added, noting that certain cities and counties might see more activity than others. “In those parts of the state, law enforcement is engaged and best practices are out there.” Michelin said that looting is a crime of opportunity, though she hinted that she believes California could see more protests if one candidate in particular wins out over another. “We’ve gotten to the point where the M.O.is that if you don’t like what’s happening, you go out and loot,” she said. “For us, we’ve learned lessons because of what happened in the past in Los Angeles, Sacramento and other parts of the state, and I think people will be more proactive in preparing.”

Should small-to-medium-size business get hit hard next week, Michelin worries that it will be a fatal blow to many. “National retailers have more resources to recover more quickly and the smaller retailers don’t.”

Los Angeles retail businesses are operating at 25 percent capacity in accordance with social distancing guidelines, Michelin said, and have already been hobbled by these regulations during the lead up to the holidays. “This is a make or break time for some of them,” she said.

Should the election prove socially explosive, “they could suffer another huge loss from looting, not just from a monetary but a mental perspective,” Michelin said.“If you’ve owned a business and navigated through Covid and have been able to regroup from the civil unrest we saw before, you’re looking to recoup some costs and continue on to turn a corner next year. If they get hit again, you might see retailers say it’s not worth it anymore. I’ve heard that from a lot of small business owners.”

Todd Johnson, president and CEO of the Beverly Hills Chamber of Commerce, said that the tony L.A. enclave isn’t taking any chances—and has, in fact, been gearing up for potential Election Day chaos for more than two months. Beverly Hills Mayor Lester Friedman, along with the city council, has been leading efforts to prepare for the worst while hoping for the best, investing $4.8 million in security efforts for next week alone. “They’ve realized there’s a potential for some unrest following the election,” Johnson told Sourcing Journal. “We were committed to not see what happened in May happen again.”

The chamber met with Rodeo Drive businesses—which were among L.A.’s most heavily targeted during the rioting and looting that took place throughout the month of June after George Floyd’s murder—and charted a course forward.

“It was determined that they will close to pedestrians and traffic starting at midnight on the 3rd, and will go through the end of the day on the 4th,” Johnson said. “There will be no access to any of the stores on that street alone.”

Across the city of Beverly Hills, other businesses are choosing to remain open, Johnson added. But the city has strategically placed K rails throughout highly trafficked streets in the event that they need to be shut down.

According to Johnson, the city has hired 80 armed private security guards and will see a rotation of 135 police officers working around the clock for nine days straight, beginning on Halloween. A SWAT team from Santa Paula, along with the National Guard, are on standby “and ready to disperse if needed.”

“A lot of the businesses on Rodeo Drive have opted to board up” next week, Johnson said, following a call last week with the city’s businesses, police, private security and an insurance broker. The chamber has instructed businesses to test their cameras and lights in the days leading up to the election, and to sign up for Nixle, a text-based service that provides real-time alerts from law enforcement and other agencies.

“We’ve been dealing with this for three-and-a-half months, with people marching, coming into town to voice their opinions,” Johnson said. “While 99 percent have been peaceful, if anyone comes in with criminal intent, it will be dealt with swiftly.”

The results of the election could take time, though, and Johnson said Beverly Hills is prepared for a prolonged escalation of tensions. “Things have changed on a daily basis this year, probably quicker than ever in our history,” he said. “It’s a fluid situation that will have to be dealt with almost hourly.”