One eagle-eyed fan of Kanye West’s Yeezy label has collected images from the artist and fashion mogul’s tweets over the course of recent months teasing his forthcoming collection with Gap, set to debut in 2021. The result is a compilation of product images—a makeshift line sheet—that gives devotees and curious shoppers a substantial look into the collection’s aesthetic.

Twitter user @_alchimist released the images, descriptions and pricing for eight potential Yeezy x Gap products, including a T-shirt, hoodie, flight jacket, roper boot, transporter bag, windbreaker and a version of the infamous foam runner, all palatably priced at $50. The line, mirroring West’s Yeezy aesthetic, relies heavily on neutrals like beiges and khakis, and is punctuated with garment-dyed pops of color like persimmon, teal and Prussian blue. 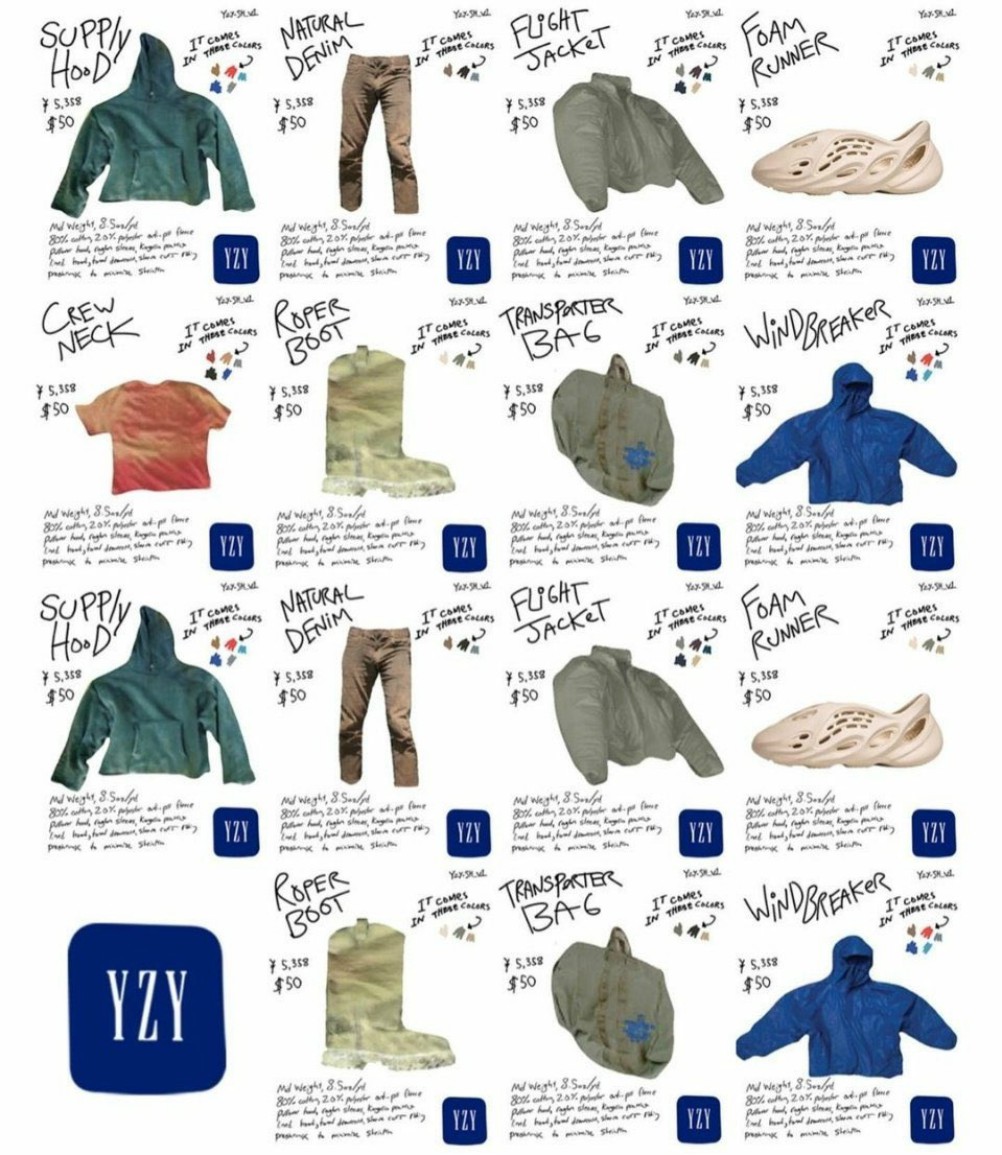 While the original Yeezy foam runner debuted this summer at $75, it quickly sold out, appearing on sneakerhead sites like StockX at exponential markups. During an interview with comedian Joe Rogan over the weekend, West expressed a desire to see the shoe sold at an ultra-accessible price point in the future. “I designed this thing, this we call it the foam runner, and we built a factory for it in Cody [Wyo.] and you can make these in 25 minutes,” he said, describing the process of 3D printing used to produce the futuristic, mono-material slip-ons. “I’m gonna make this shoe $20,” West added. “You know, money isn’t real, so that means the world should be eventually free.”

Despite helming a brand built largely on its exclusivity, West has expressed an eagerness to reach a broader audience with his highly coveted products—and to bring production back to the U.S. Gap and West announced the start of their decade-long agreement in June, giving West unfettered access to the all-American shopper through a familiar heritage mall brand with a massive national footprint.

And over the course of the past year, he has also built out his own Yeezy manufacturing campus near his family’s second home—and Hollywood escape hatch—in Cody. In July, Yeezy business director Matt George told Rivet that the deal would positively impact the region’s job market, bringing entry-level positions with “highly specialized training provided, to allow for a local workforce that will be heavily sourced for the manufacturing jobs.” While he did not specify which products would be produced at the new complex, George added that design and prototyping roles would be the first ones filled.

But as West launched a presidential bid that month and demonstrated increasingly erratic public behavior—lashing out at family and brand partners alike—it appeared that the newly announced Gap collab might not make it off the ground.

Following a non-sequitur about his collaborative relationship with the San Francisco-based apparel brand at West’s first campaign rally in South Carolina on July 19, Gap’s stock dropped 6 percent in under 24 hours. West told onlookers—and the world, through the lenses of their smartphones—that he would “walk away” from his deals with both Gap and Adidas without the promise of a seat on the board at both companies.

And less than two months later, amid another frantic tweetstorm, West fired off some new shots at the basics brand. “I’M NOT RELEASING NOTHING ON GAP TILL I’M ON THE BOARD,” he wrote on Sept. 25, despite the fact that the collection’s designs were well underway.

While West has a propensity to incite boardroom panic, the strength of his cult of personality may be worth the ride for long-embattled Gap, which has been shuttering stores across the country and the globe at an accelerated pace since the pandemic began. This spring, Bloomberg valued the Yeezy brand at as much as $3 billion based on a company document reviewed by the outlet. The figures, calculated in September of 2019, revealed that West’s collaborative line with Adidas was on track to rake in $1.3 billion in footwear revenue—a 50 percent increase from the year prior.

Gap, which has trafficked in everyman’s garb for more than half a century, represents a blank canvas for West, who demonstrates no shortage of creative direction. The partnership will also give Yeezy a platform to move away from its hype-heavy streetwear roots into the world of everyday apparel.

“I don’t love the idea that some of the reason why people buy is just for hype culture, or a ‘I got this color way and you don’t have it,’ type of mentality,” West told Rogan. “I’m an essentialist. I’m a minimalist.”