In the ultimate vote of confidence that luxury will thrive in the post-pandemic world, LVMH is going big and bold in resurrecting an iconic, long-dormant shopping destination in Paris.

LVMH says this “mythic” department store will be the “new destination of Parisian elegance,” with the intent to draw both local shoppers and international tourists alike to sample a distinctive French lifestyle.

Approximately 600 brands, from iconic names in luxury to exclusive designers, will be sold within the location. LVMH says that the shopping center will also include the “largest beauty space in continental Europe” with a studio and spa, as well as two concept stores, Loulou and Rivoli. Additionally, Samaritaine includes a private shopping experience where consumers can also view artwork in a space called L’Appartement. 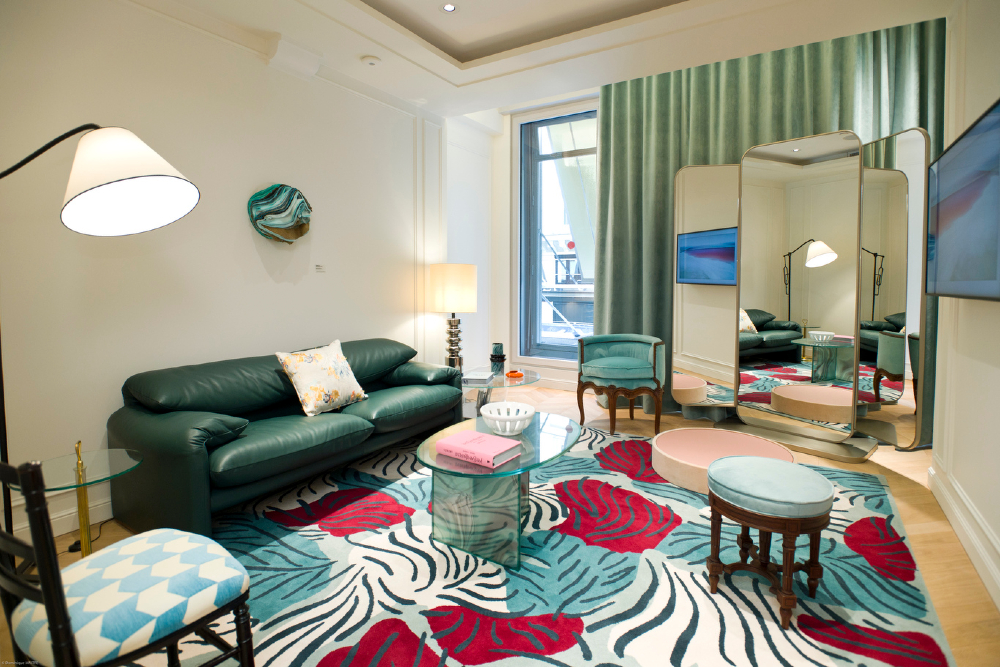 To kick things off, LVMH installed a popup space called “Objets Nomades Louis Vuitton” in the store through Aug. 28. The space will showcase numerous leather furniture pieces and design objects for the Objets Nomades Collection, including a hammock, a foldable stool, an armchair and a room screen.

The renovation and reopening comes as luxury as a whole is making a slow recovery from a tumultuous 2020. In its 2021 Luxury Spring Update, consultancy firm Bain & Company said that luxury eked out paltry growth—between 0-1 percent—over 2019 totals.

But Bain & Co. sees one of two outcomes for the overall industry this year. The firm says there’s a 70 percent chance that full luxury recovery to 2019 levels doesn’t occur until 2022, in the event that full-year growth is stifled by slower domestic luxury purchases and limited intra-regional tourism. 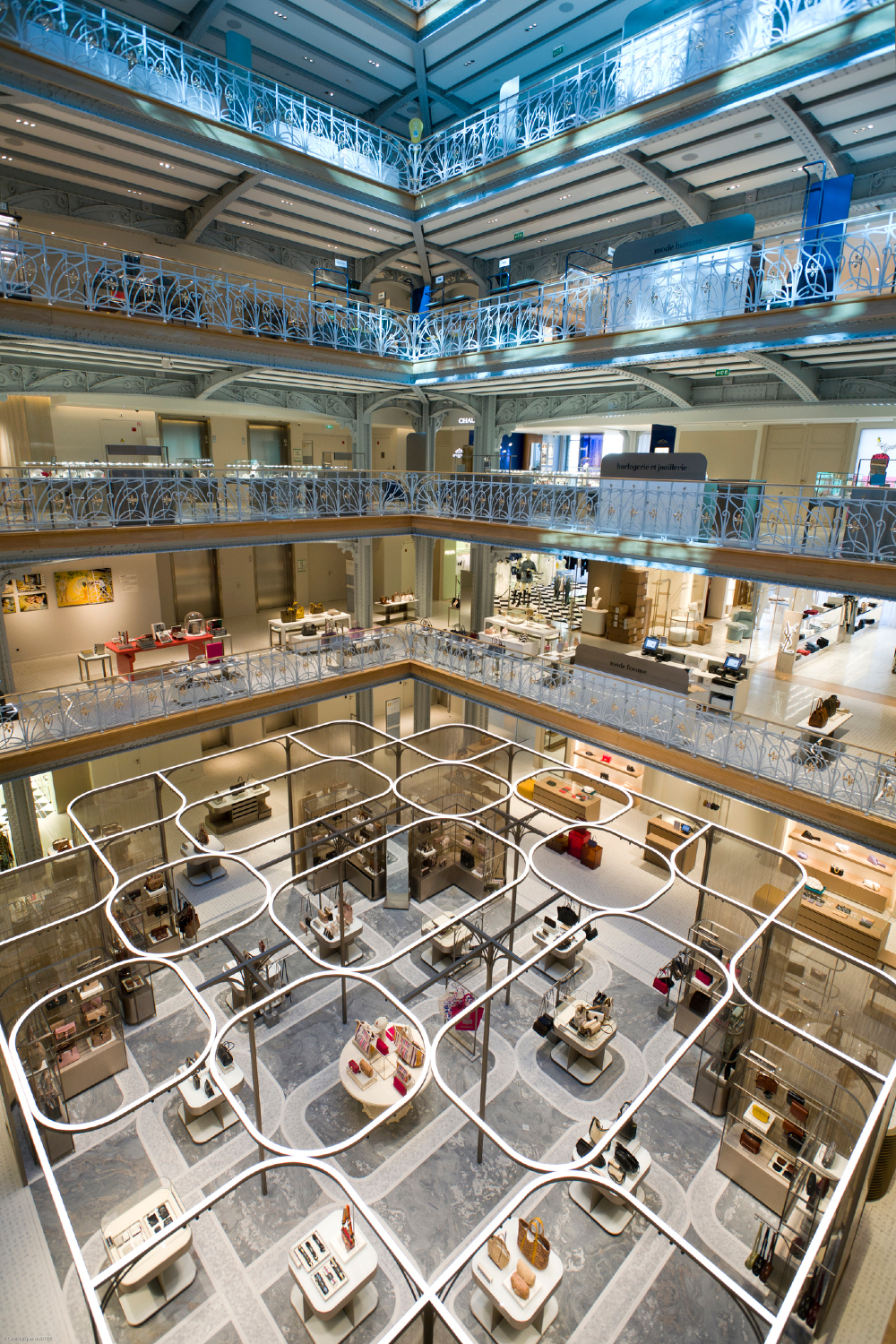 LVMH seems to be banking on the more positive possibility, which Bain said includes a 30 percent probability that the luxury market could meet or exceed $340 billion in sales of high-end items such as apparel, handbags and jewelry, which would be the most in two years.

The fashion house returned to growth in the first quarter, generating $16.75 billion in sales across its more than 70 brands. Fashion and leather goods in particular had an excellent start to the year, generating record revenue of $6.7 billion, or 37 percent higher than the same period in 2019. Overall, LVMH saw organic revenue growth of 8 percent on a two-year basis.

At Samaritaine, the restoration and renovation worksite spans 70,000 square meters and seven floors, and as many as 800 skilled artisans, including painters, sculptors, gilders and ironworkers, collaborated to execute the vision.

Japanese firm Sanaa, winner of the Pritzker Prize for architecture in 2010, designed the project, with LVMH noting that the Samaritaine is meant to be “instantly identifiable by a new undulating glass façade on the rue de Rivoli.” 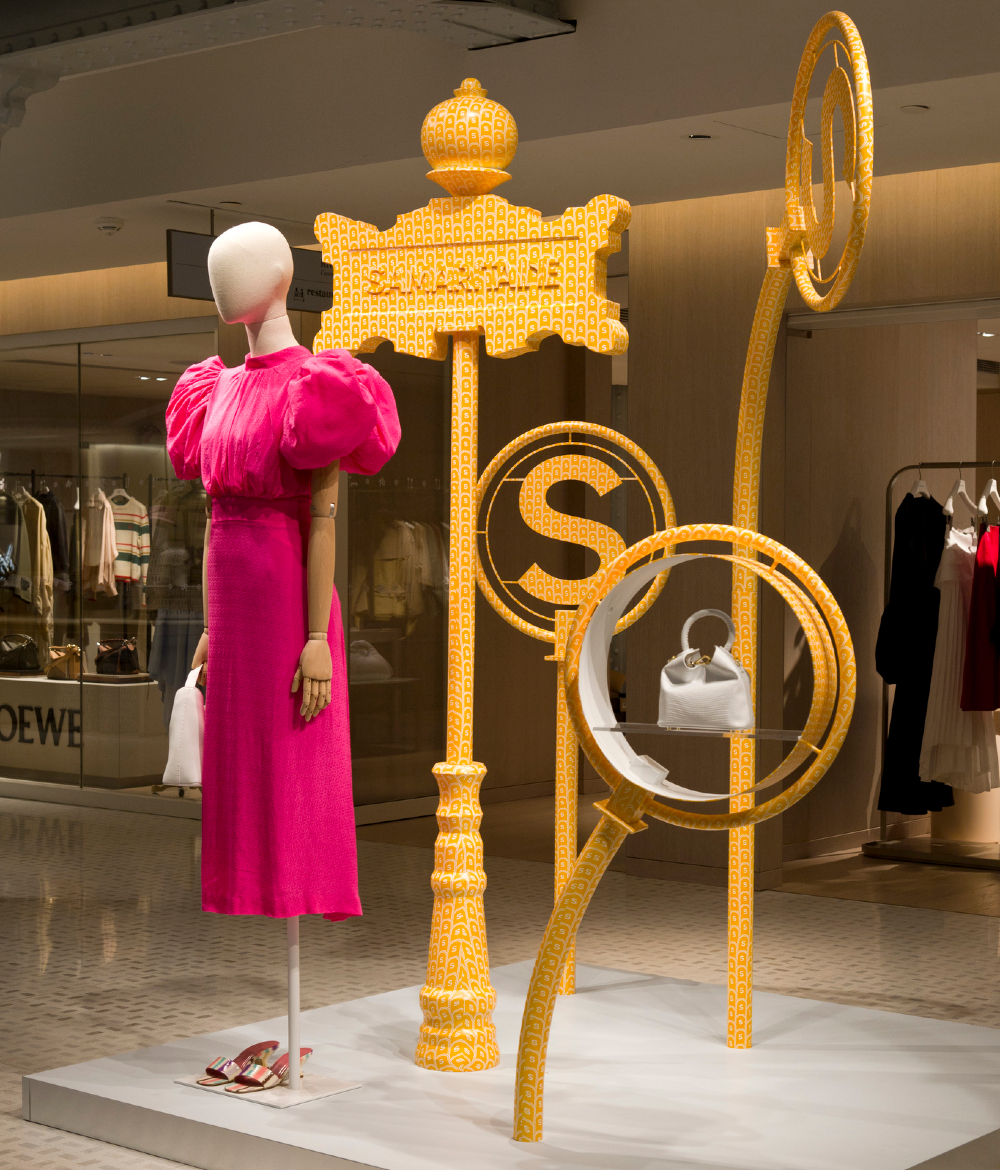 With the upgraded design, Samaritaine has regained its fully glass roof with an Eiffel-style iron frame. While the department store was initially conceived in 1870 by Ernest Cognacq and Louise Jaÿ, architect Frantz Jourdain designed the modern 37-meter by 20-meter structure in 1907.

“We feel great pride in restoring access to a historical monument that has always been at the forefront of its times and holds a special place in the hearts of Parisians,” stated Jean-Jacques Guiony, chairman and CEO of the Samaritaine.

The project also is home to Cheval Blanc Paris, the company’s first urban hotel, which will welcome its first guests on Sept. 7. Its 72 rooms and suites were created by American architect and designer Peter Marino. 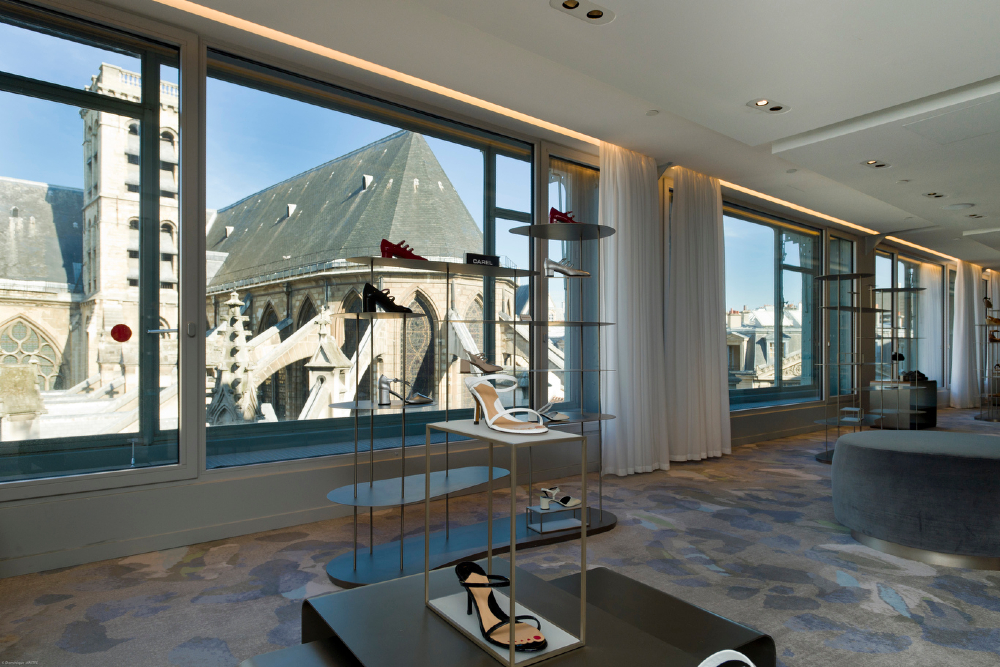 Samaritaine Paris Pont-Neuf is also serving a role as a mixed-use urban project, housing a nursery with space for 80 children and 96 public housing units.

Located between the Louvre and the Les Halles shopping center, the Samaritaine complex is designed to play a central role in reviving the neighborhood, which also includes a pedestrian square with direct access to the nearby Pont Neuf bridge.

As many as 10,000 square meters of roads and sidewalks were reclassified as part of the renovation, including the creation of a 5,000-square-meter public plaza.

“No other department store has such compelling links to the two faces of Paris, one engaged with the historic economic vitality of the recently renovated Les Halles and the other overlooking the Seine, offering the most beautiful view of the world’s most beautiful city,” Arnault said in a statement. “The completion of this project, which both creates jobs and promotes a unique Parisian art de vivre around the world, is also a great source of pride for our Group in France and in Paris.  Many of our Maisons were founded in Paris, where we intend to make an active contribution to economic recovery, as well as the worldwide appeal of France.” 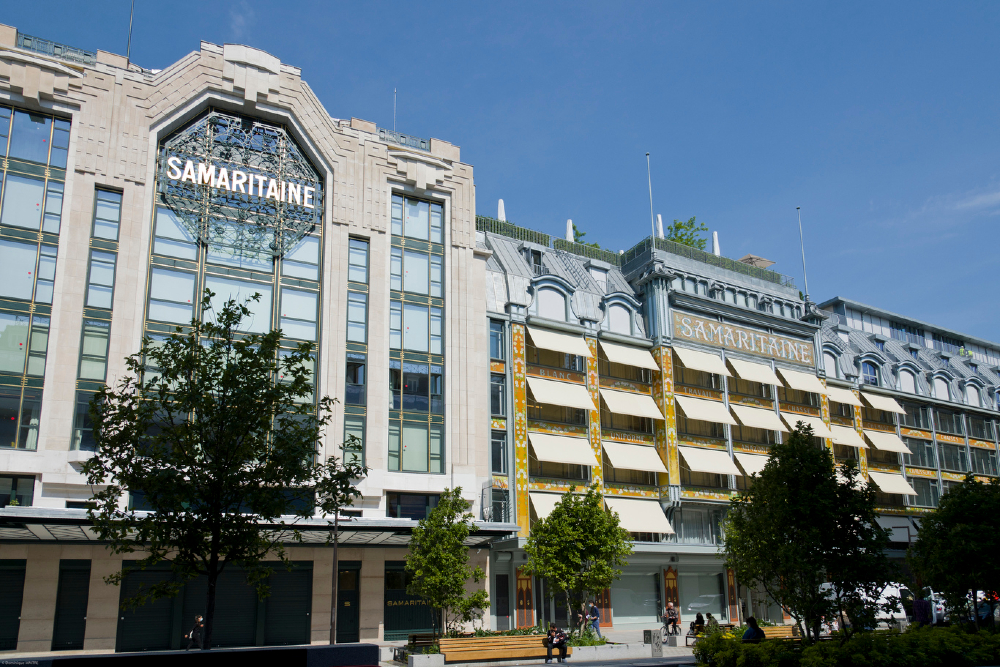 The department store itself will employ 1,700, while 3,000 overall will work throughout the complex.

Samaritaine is also an extension of LVMH’s sustainability program, LIFE (LVMH Initiatives For the Environment) 360, with the building certified across various environmental standards. Retail spaces, hotel and offices are all certified through BREEAM (Building Research Establishment Environmental Assessment Method), HQE (High Environmental Quality) and LEED (Leadership in Energy and Environmental Design), while housing is certified via Patrimoine Habitat & Environnement Effinergie.

In particular, LVMH said the location is limiting energy consumption through the use of “cutting-edge” materials and low-consumption lighting.