Macy’s Inc. has decided to sell what was left of its Downtown Seattle store–two bottom floors and a basement–at 300 Pine Street.

The site has been in operation for 90 years, under the Macy’s nameplate since 2003 and before that The Bon Marché, when Macy’s was still known as Federated Department Stores. Clearance sales will begin January 2020, with a store closure date slated for the end of February 2020.

The store, which occupies an entire city block at Third Ave. and Pine Street, was declared an historic landmark in 1988. The sale of the building won’t be completed until after the Macy’ store has closed.

A spokeswoman for Macy’s said, “The decision to close a store is always difficult, and we look forward to continuing to serve our customers at nearby Macy’s Bellevue Square, Alderwood, Southcenter and the Redmond Furniture Gallery, and online at macys.com.”

Macy’s will again ring in the Seattle holiday season on Nov. 29 with its 29th annual Macy’s Holiday Parade and fireworks show, the spokeswoman said.

“We look forward to working with the Downtown Seattle Association to transition these beloved traditions,” she said, adding that the 161-square-foot-high Holiday Star that the retailer lights up each year will remain dark due to disrepair. The new property owner has “committed to displaying a reimagined star for the Seattle community to enjoy beginning in 2020,” the spokeswoman added. 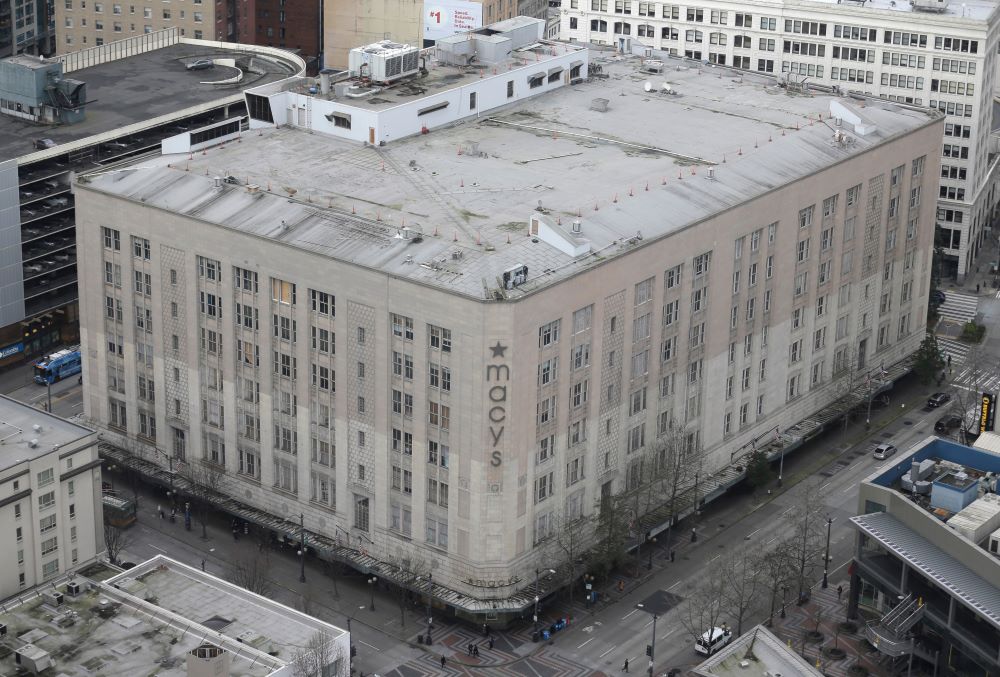 Although Macy’s did not disclose the name of the building’s new owner, speculation indicates it is likely Starwood Capital Group.

Back in October 2015, an affiliate of Starwood acquired the top four floors–more than 300,000 square feet of space–in the eight-story building for $65 million. At the time of the transaction, Macy’s then chairman and CEO Terry J. Lundgren, said, “Our vision is to make the store easier and quicker to navigate while also attracting new jobs and economic activity to space that has not been fully utilized in recent years.” Macy’s was also fighting a battle then with an activist investor, Starboard Value, that was pushing the company to unlock shareholder value through the sale of select real estate holdings. A Macy’s spokeswoman said at the time that the deal was not in response to any investor activity.

Starwood added two other floors to its ownership in 2017. Macy’s retained the basement, ground floor and second floor for its business. Meanwhile, Amazon said two years ago that it was leasing the six top floors.

The Bon Marché department store chain began in Seattle in 1890 and was sold to Hahn Department Stores in 1929. It was later folded into Allied Stores, which merged with Federated in 1989. Federated in 2007 changed its name to Macy’s Inc.