Marks & Spencer is the latest retailer adapting to consumer desires for a more contactless experience amid Covid-19 concerns, launching two new trials for its click-and-collect program.

M&S is debuting in-store contactless pickup collection points at its Hempstead Valley, Camberley and Longbridge stores, while offering a curbside drive-up collection point at the Camberley location. Both options are designed to ease the potential fears shoppers harbor about returning to stores, while potentially enabling a more convenient and seamless journey. For example, the curbside drive-up option would eliminate two potential queues: entering the shop and visiting the click-and-collect desk.

When using the pickup option, the customer will receive a “Ready to Collect” email, which includes a link to book a collection slot through a chatbot on text, WhatsApp or Facebook Messenger. From there, the chatbot confirms the time slot and the allocated location where the shoppers will collect the order in store.

For the curbside option, the link also includes a prompt for the shopper to give their car registration, before confirming the time slot and the allocated location where the customer should drive to. Upon arrival, shoppers tap a link on their phone, after which a staff member brings their parcel out to their car.

The trials are the department store’s latest extension of its Never the Same Again program launched in May, which the company designed to adapt its retail environment to the new shopping realities posed by the coronavirus pandemic. M&S previously announced in July that it tripled its Mobile Pay Go network from 100 to 310 Food Hall stores, meaning more customers could buy their groceries checkout free without visiting a till, using the M&S app on their smartphone.

Kohl's Is Playing Catch-Up Ahead of the Holidays

The department store is working with platform provider Doddle to implement the initial three-store pickup trial, which the retailer aims to help understand customer demand. The program will be rigorously measured with data and by gathering extensive customer feedback. The team will also measure the expectation that click and collect will become more efficient for associates to manage in-store using this technology. 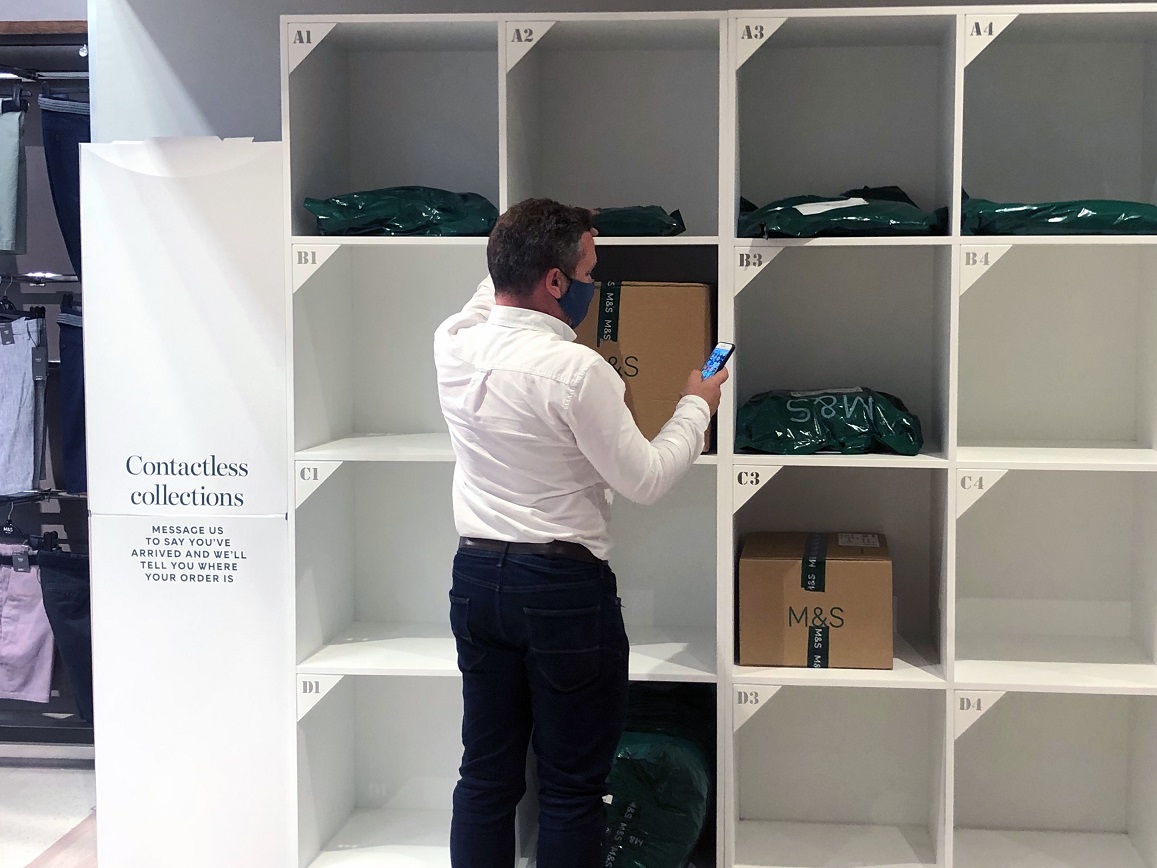 M&S first launched click-and-collect in 2009 and now has a collection network of nearly 8,000 collection points in the U.K. Prior to the pandemic, the retailer said it improved the order cut-off time it offers by three hours in just one year, and as such, began trialing a new two-hour click-and-collect service across 17 larger stores in February. As part of the trial, order cut-off time for next-day click-and-collect improved from 10 p.m. to 11 p.m., but that time has since been rolled back to 8 p.m. to ensure social distancing can be maintained in its online warehouse.

The company did note one pickup trend that is starting to bounce back closer to pre-Covid levels. In March, approximately 70 percent of online M&S orders were collected in the retailer’s clothing and Simply Food food stores. While this percentage fell to a low of 15 percent when clothing space was closed, the rate of pickups has gradually been rising again in recent weeks and is now at nearly 50 percent.

With these numbers in mind, Marks & Spencer also is increasing the use of in-store picking and packing for online orders as they continue to increase. M&S now has 239 stores fulfilling online orders, 153 more than pre-Covid. While the move was initially made to support the online warehouse and clear stock from stores, the company believes it has the long-term potential to help improve the customer proposition and balance stock between stores and online.

This change means thousands of customer orders are now put together in their local store, supported by M&S’s online warehouse.

During the pandemic, M&S also added the option on its website to “contact me when available” for every single clothing, home and beauty item. When a sold-out item is back in stock, customers receive an email or text and then log on to order for delivery or next-day click and collect. Thousands of items are purchased every week via the tool, the retailer said in a statement.

Not all aspects of the Never the Same Again program have delivered positive news in the short term. The department store expects to cut 7,000 jobs over the next three months, impacting its central support center, regional management and its U.K. stores. The cuts are added onto the 950 job eliminations announced in July as the company compressed what was a three-year turnaround plan into just 12 months following the impact from the coronavirus.

Both the new pickup solutions and the organizational restructuring at Marks & Spencer come as more shoppers in the U.K. are finding their way back into retail stores.

The latest data from Springboard, a provider of insights on bricks-and-mortar retail activity, reveals that foot traffic in U.K. retail destinations from Aug. 16-22 rose by 4.1 percent from the week before, a significant acceleration in the rise in the previous week of 0.8 percent and 1.8 percent in the same week last year. In fact, Springboard reports that the period marked the sixteenth consecutive week in which the annual decline has lessened.

These two regions generate a far greater volume of footfall than elsewhere in the country, which meant that the week still ended with footfall declines 30.7 percent compared to the same week last year, an improvement from an annual drop of 32.5 percent in the week before.

All three retail destination types benefited from a rise in footfall, with shopping centers being the clear winner with a week-on-week increase of 7.1 percent versus a 3.2 percent bump in high-street retail locations and a 2.7 rise in retail parks—the equivalent of larger non-mall shopping centers in the U.S.

Despite retail parks having the lowest increase, they still lead the way in U.K.’s overall retail recovery, with the benefit of large food stores, free parking and large stores. Foot traffic in retail parks is now only 10.6 percent lower than last year compared with shopping centers, where traffic is 32.4 percent lower and high-street locations, where footfall is 39.1 percent lower.

“It seems that the increased quarantine measures imposed last week on a number of overseas destinations are having a positive impact on U.K. footfall,” Diane Wehrle, insights director at Springboard, said in a statement. “Footfall in U.K. retail destinations last week not only rose on a week-on-week basis, but the uplift was more than four times as large as the week before, and two and a half times as large as the same week last year. The outcome is a further incremental recovery in footfall compared with 2019, and the sixteenth consecutive week in which the annual decline has lessened which offers a glimmer of hope for retailers.”