NRF’s annual Halloween survey—conducted by Proper Insights & Analytics—estimates 65 percent of Americans intend to celebrate Halloween or participate in Halloween activities this year, up from 58 percent last year, but slightly down from 68 percent in 2019. Unsurprisingly, households with children are significantly more likely to celebrate Halloween, 82 percent, than those without, 55 percent.

“Americans plan to spend more than ever to make this Halloween a memorable one,” NRF president and CEO Matthew Shay said in a statement. “Retailers have implemented a number of measures, such as bringing in Halloween products earlier than normal, to ensure their shelves are stocked with seasonal candy, décor and other items ahead of this important holiday.”

Though the percentage of Americans planning on dressing up for Halloween has remained relatively steady since before the pandemic—47 percent in 2019 and 46 percent in 2020 and 2021—the expected spend has followed a different track. After cratering last year to $2.61 billion, costume spending is expected to jump up to $3.32 billion this year, surpassing even 2019’s $3.16 billion. As costume spending was tracking downwards prior to the pandemic, this year’s estimate remains below 2017’s $3.35 billion.

Spending on decorations, candy and greeting cards, meanwhile, is expected to grow to $3.17 billion, $3 billion and $660 million, respectively. In each case, this year’s estimate represents a dramatic increase compared to last year, as well as historic levels.

Trade Groups Team Up to Speak Out Against Tariffs 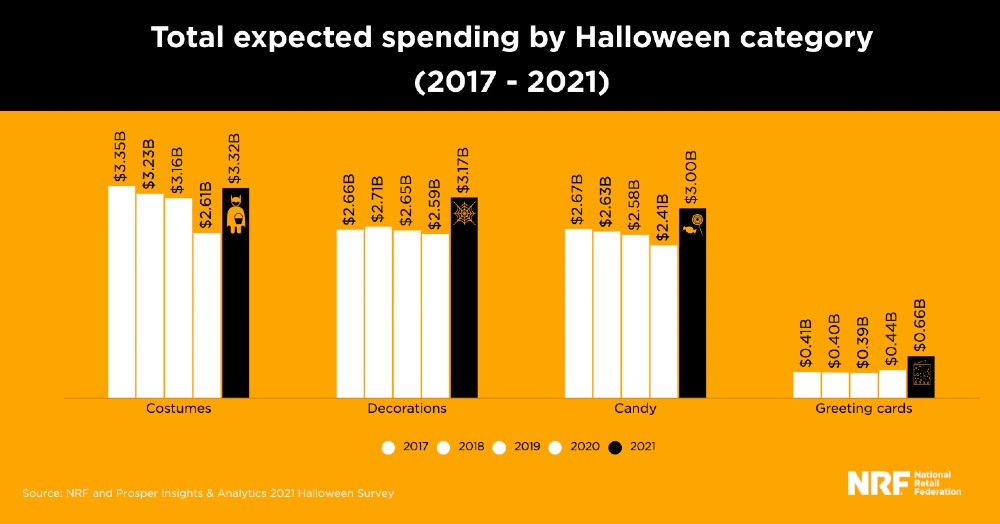 On average, consumers plan to spend $102.74 on costumes, candy, decorations and greeting cards, NRF found, about $10 more than last year. Households with children are expected to spend $149.69, twice the amount as those without, $73.57.

“This year in particular, we see an emphasis on Halloween spending from families,” Prosper Insights executive vice president of strategy Phil Rist said in a statement. “Not only are those with children intending to spend more on Halloween-related items like costumes, they are also getting a kick start on their shopping, with more than half planning to start their shopping in September or earlier.” 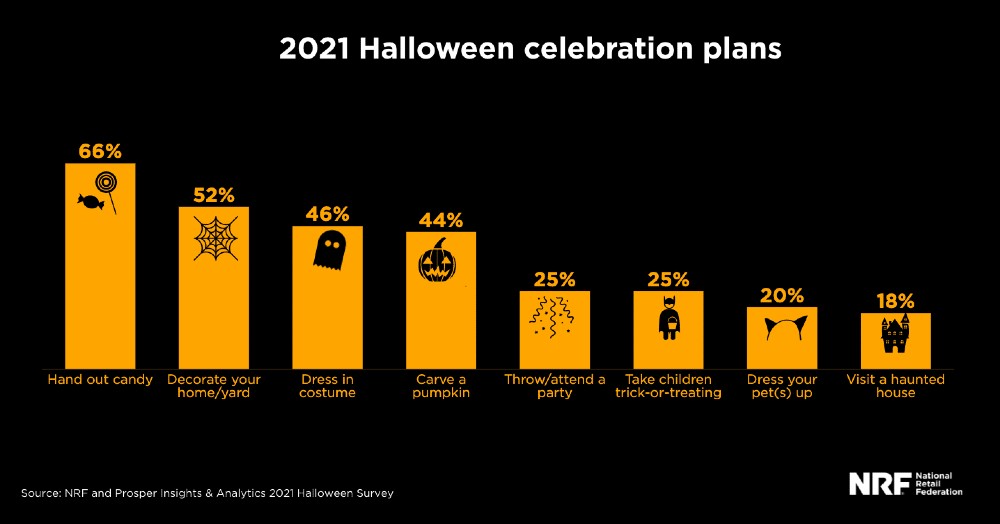 Many of the activities that suffered most because of the pandemic last year will likely remain subdued this year as well. Notably, the NRF estimates only one-quarter of Americans will throw or attend a Halloween party, slightly better than last year when 22 percent said the same, but well below 2019’s 32 percent. Twenty-five percent are expected to trick-or-treat, compared to 23 percent and 29 percent in 2020 and 2019, respectively. Sixty-six percent reportedly plan to hand out candy, up from 62 percent last year and down from 69 percent in 2019. Just 18 percent expect to visit a haunted house, versus 15 percent and 22 percent the past two years.