Nike saw fourth-quarter revenue drop 38 percent year-over-year to $6.31 billion alongside a net loss of $790 million as the athletic apparel and footwear giant’s results were significantly impacted by store closures across the North America, EMEA and APLA (Asia-Pacific and Latin America) regions.

Total inventories for Nike were worth a combined $7.4 billion, up 31 percent year over year from $5.6 billion, amid store closures both at its own locations and at its wholesale partners. Product shipments to partner retailers were down nearly 50 percent. In order to prevent excessive inventory from impacting the remainder of the year, in mid-March, Nike cancelled pre-COVID-19 factory purchase orders for the fall and holiday seasons by roughly 30 percent.

“While this had a negative impact on gross margins in the fourth quarter, it was the right decision to tighten future inventory movement throughout our supply chain and utilize the inventory we have on hand,” said Matt Friend, executive vice president and chief financial officer at Nike during a company earnings call. “We implemented a plan for a seasonless flow of inventory by shifting product offer days so we could use relevant summer and fall product to meet near-term demand. We also edited product lines by up to 15 percent to improve SKU productivity.”

Nike’s digital sales increased 75 percent in the fourth quarter, including triple-digit growth in May after stores started opening. E-commerce sales now make up 30 percent of the company’s total sales. In the earnings call, Nike unveiled the next phase of its Consumer Direct Offense as part of the continued focus to become more of a digitally focused direct-to-consumer brand: the Consumer Direct Acceleration.

While Nike initially had a goal to reach 30 percent digital penetration by 2023, the company already achieved that goal this year—and now is setting the bar at 50 percent penetration. As part of the “Acceleration,” Nike plans to open a new regional service center on the West Coast before the holiday season to forward-deploy e-commerce inventory, leveraging advanced analytics and demand-sensing capabilities from the company’s acquisition of AI-based predictive analytics platform Celect.

Nike will also open 150 to 200 smaller format “mono-brand stores” across North America and EMEA designed to “integrate online-to-offline capabilities,” with CEO John Donahoe hinting during the call that the company is looking to use the stores to capture more of the women’s apparel market.

“In a funny way, I would characterize this investment in these new doors as continued investment in our digital future—we look at everything through the eyes of the consumer…They may want to be in a store and buy something that is not in the store because of inventory and the associate uses a digital device to buy it and gets shipped home,” Donahoe said. “We’ve been testing this format with Nike Live and have a great understanding of how to best deliver this experience and so we will proceed ahead this year with more test-and-learn examples of it and scale it through the next couple of years. And again to be clear, we believe this is incremental to what’s in the market today.”

Donahoe noted that Nike Training Club weekly active users were up triple digits in the quarter, pointing out that directly engaging with consumers through activity apps is the core of Nike’s strategy, since it leads to increased purchasing through the company’s consumer apps.

It’s worth noting that following industry-wide trends, apparel took a much greater hit than footwear throughout the quarter, with the former seeing a 42 percent revenue decline and the latter experiencing a 35 percent dip. Equipment revenue tumbled 53 percent as sports and many recreational activities have largely been put on hold due to the COVID-19 crisis. In North America, non-equipment categories performed significantly worse, with apparel sales plummeting 56 percent and footwear falling 41 percent.

But Nike is still Nike despite what the COVID-19 pandemic did to its business in the short term, so expect both categories to bounce back on some level in future quarters. Nearly 60 of shoppers indicated plans to spend more on activewear in the coming months, according to a survey of 300 consumers from investment banking and asset management firm Needham. As many as 35.5 percent of consumers say Nike is the activewear brand they spent the most on over the past few months, with nearly 34 percent expecting to devote a greater share of their dollars to Nike in the coming months.

Nike operates from a strong liquidity position, finishing the quarter with $12.5 billion with cash and equivalents, as well as short-term investments of $8.8 billion, $4.1 billion higher than last year, primarily due to proceeds from a $6 billion corporate bond issuance in March.

While Nike wouldn’t provide specific fiscal 2021 guidance, looking ahead, the company expects revenues in the second half of the year to be up significantly versus the prior year, with full-year fiscal sales “flat to up.”

Net Sales: Total revenue tumbled 38 percent year over year to $6.31 billion in the fourth quarter, while annual revenue fell 4 percent to $37.4 billion, down 2 percent on a currency-neutral basis due to the impact of COVID-19.

Prior to the pandemic, the company’s quarterly revenue was up 9 percent, or 11 percent on a currency-neutral basis.

In the fourth quarter, sales at the North America business fell 46 percent to $2.23 billion versus Wall Street expectations of $2.17 billion, while revenue in EMEA was also down 46 percent to $1.33 billion, slightly ahead of the $1.31 billion consensus. Digital sales in North America grew 80 percent, while they jumped nearly 100 percent in EMEA.

China, which had been more heavily impacted in Nike’s third quarter, saw revenue decline only 3 percent to $1.65 billion, outperforming estimates of $1.60 billion. For the fiscal year, China revenues increased 8 percent, or 11 percent on a currency-neutral basis, marking its sixth consecutive year of double-digit currency-neutral growth, despite the headwinds from COVID-19 in the second half of the year. 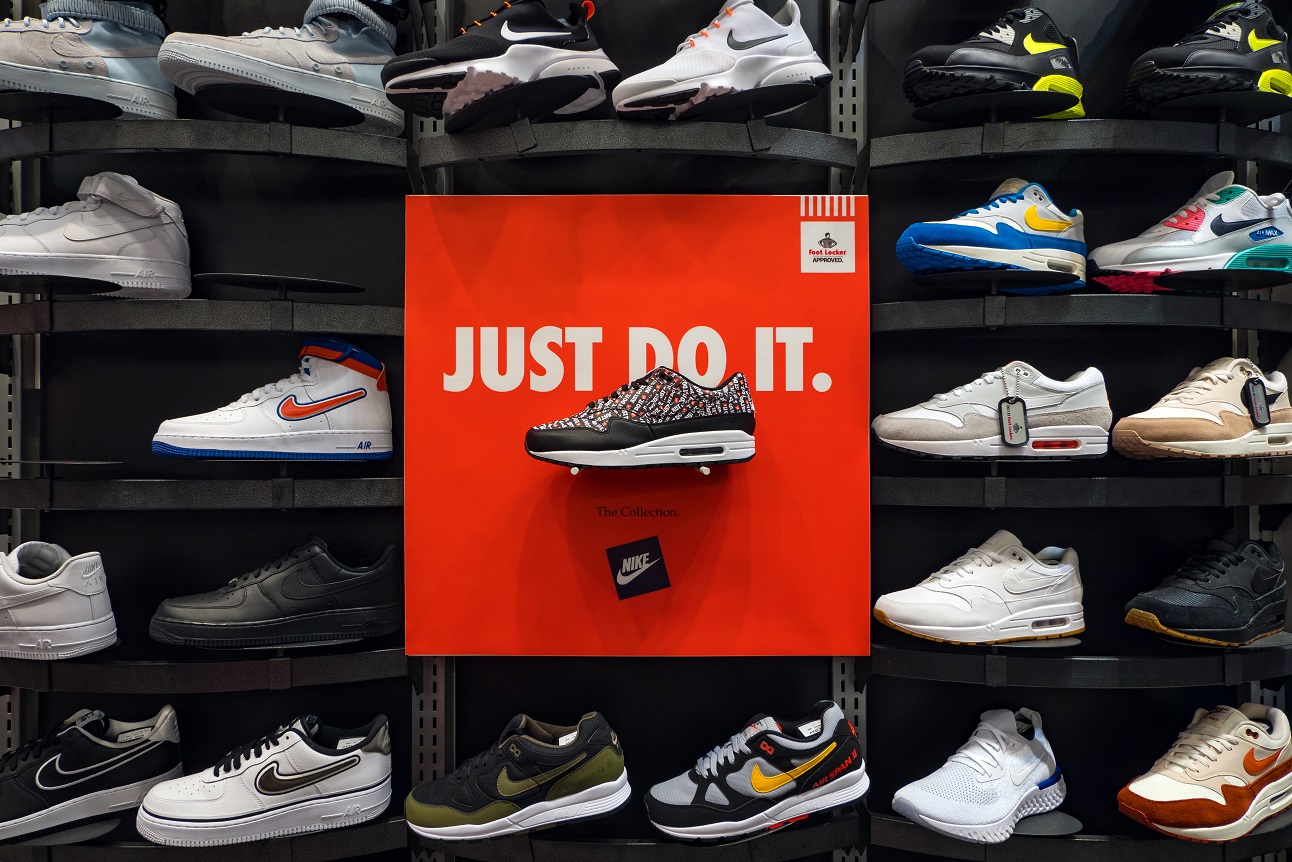 Net Earnings: Nike took a whopping $790 million net loss in the fourth quarter, marking a 180 percent loss from the $989 million gain from the year prior. Diluted net losses were 51 cents per share, a far cry from Refinitiv data, which estimated a 7-cent per share gain.

The losses were driven by lower revenue and gross margin as a result of the COVID-19 impact on operations, but were partially offset by lower selling and administrative expenses, which decreased 6 percent to $3.2 billion. Demand creation expenses were $823 million, down 19 percent from the prior year as retail and brand marketing spend was shifted amid global cancellations of sporting events.

Gross margin saw a major decline, dipping from 45.4 percent in the fourth quarter of 2019 to 37.3 percent due to numerous factors related to the pandemic. Even amid higher full-price average selling prices, margins were more than offset by higher product costs, as well as factory cancellation charges, increased inventory obsolescence reserves and the adverse rate impact of supply-chain fixed costs on lower wholesale shipments.

Net income for the full year was $2.5 billion and diluted earnings per share was $1.60, down 36 percent.

CEO’s Take: “As I said earlier, Nike is in a position to emerge from the COVID-19 pandemic even stronger due to our Consumer Direct Offense,” said Donahoe. “The global pandemic has made it clear that consumer behavior is changing rapidly, providing the opportunity for us to accelerate the pace of our transformation. Over the past few years, we have shifted from a legacy wholesale distribution model to investment in a model that gives our consumers a more premium shopping experience.”