2020 may go down in history as an inflection point for the fashion industry. Disruptions to global supply chains, long-overdue discussions about diversity and inclusion and increased consumer outcry regarding unsustainable practices have forced the sector to reckon with a status quo that will no longer serve.

But for some brands, this cultural and economic shift has highlighted advantages within their businesses that were actually present all along.

Los Angeles-based apparel label Project Social T has amassed a quiet but loyal following over nearly a decade in business. Designed and manufactured in the City of Angels, the label’s California-cool range of casuals and loungewear have made it a mainstay at national retailers like Nordstrom and Urban Outfitters.

Founder and CEO Mike Chodler was born into the apparel industry, cutting his teeth at his family’s manufacturing business during the ‘80s and ‘90s. During his early professional years, he watched apparel production trickle—and then begin to surge—outside of the U.S., to China and beyond.

While the vast majority of clothing and footwear production would decamp to Asia during this period, Chodler counts himself among the stubborn contingent that dug in their heels and stayed put. He first launched a juniors brand called Realitee, which held fast through the early aughts, then pivoted to debut the contemporary adult apparel label, Project Social T, in 2011.

Chodler and partner Tom Scorer, vice president and chief financial officer, built a thriving wholesale business on partnerships with national chains and a sizable network of small, mom-and-pop boutiques, which make up more than 60 percent of sales.

But on March 15, Chodler found himself staring down an inbox full of unwelcome messages. “It was the Ides of March, and there was an influx of emails,” he said. “Everyone was canceling orders, and I was paralyzed.”

As the coronavirus began sweeping the nation, retailers reading the tea leaves started feverishly contacting their suppliers with pleas to hold or rescind their spring orders. Some even rejected inventory that had already arrived at their warehouses, sending it back on the truck it rode in on.

Chodler and Scorer moved quickly to bolster the brand’s e-commerce site, which had not served as a heavy thoroughfare for consumer traffic prior to the crisis. But in the age of COVID-19, even businesses entrenched in brick-and-mortar have been forced to move online.

It was a Hail Mary, but it saved the brand’s spring season. “Things started going crazy at the end of March,” Chodler said, as site sales spiked 500 percent.

And, in a surprising turn of events, the brand’s boutique partners began outmaneuvering their larger retail counterparts. Using social media to connect with local shoppers and even sliding into DMs, Project Social T’s mom-and-pop partners would stop at nothing to make a sale—even going as far as to drop off tie-dye loungewear on a shopper’s doorstep, and allowing them to try it on inside their own homes.

“They can be nimble on their feet,” Scorer said. “They’re not hamstrung by loads of corporate edicts and culture.”

Scorer’s remarks about Project Social T’s retail partners underscore a philosophy that the brand itself has fought to cultivate and keep since its inception. The company rejected the siren’s call of cheap overseas manufacturing, instead building its identity—and community—around a base of stateside laborers, partners and consumers.

“I was trained to do domestic production—this is everything I’ve ever known,” Chodler said. The brand’s mostly knit offerings are made by U.S. knitters, and its fabrics sourced from many mills based in L.A., he added.

“Being designed and made here, and keeping things close to home, allows us to do a lot of things that those who outsource production to Asian markets don’t,” Scorer added. The brand collaborates closely with its mills and dye houses, developing new washes each season. “We’re working with people—we’re sparking ideas with them to really make things happen, rather than just putting a tech pack together and sending it off to China.” 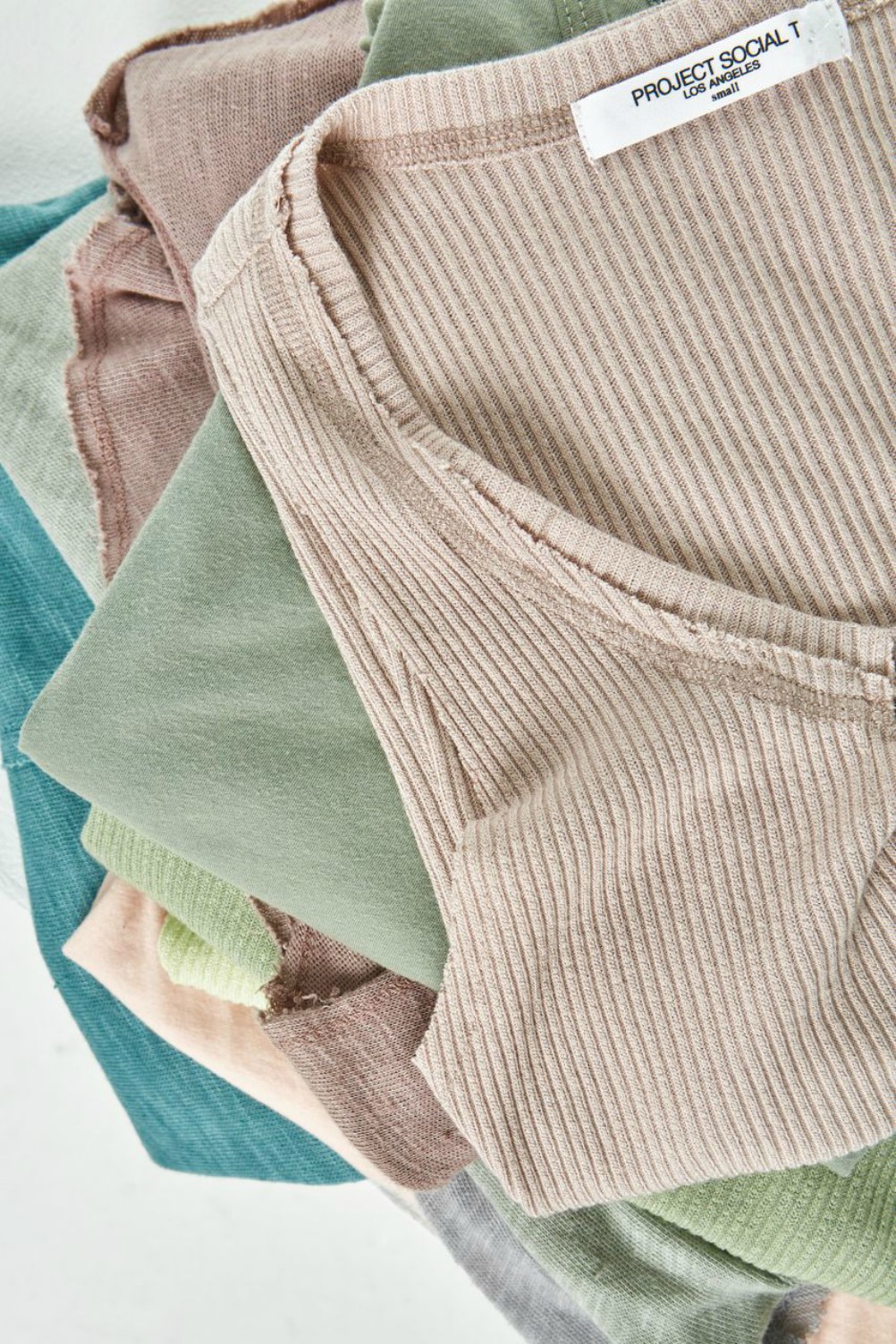 While the company doesn’t own its factories, it has for years partnered with a close-knit quorum of manufacturers employing between 15-40 workers each. During a turbulent time like the present, Chodler said he is grateful that Project Social T can help prop up the local workforce, with whom he has become close.

“Because we’re so close to our supply chain, we see them every day,” he said.

And in recent weeks, production has picked up, keeping the brand’s L.A. operations especially busy.

“Now what’s happening is stores are opening back up,” Chodler said, adding, “The floodgates are open.”

Retail partners that under-ordered for summer, expecting a dearth of shoppers, are now scrambling to fill their shelves. Consumers, it turns out, are itching for normalcy, even if it means buying new duds to wear around the house.

Chodler said he’s already had to place two rounds of reorders for retailers, on top of the conservative quantities he stipulated for July. “The demand is really getting stronger,” he said. Scorer credited local production with the brand’s ability to get product into the hands of desperate retailers quickly.

Chodler said this year’s fire drill has provided some illuminating takeaways informing Project Social T’s forward-looking strategy. “We have a different view internally,” he said. “Things have changed, and it started because of COVID.”

The brand’s creative team is more focused on emerging trends than ever before, he said. No one could have predicted what this spring would look like for shoppers, who ended up needing sweatpants, not sundresses. But being locally designed and manufactured, Project Social T has found itself in the catbird seat when it comes to fulfilling consumer needs quickly and efficiently.

“We can get things done in four weeks or less, whereas in Asia, development can be nine months,” Chodler said.

But keeping an ear to the ground doesn’t mean creating products on a whim, Scorer said. “Our creative team really believes in what they’re doing, and that’s only increased because adversity is the mother of invention,” he said. “They’re examining what they’d really like to do and what they’re invested in, and we’re seeing the product reflect that.”

When it comes to distribution, the pandemic has actually contributed to the brand’s confidence in its ability to run a thriving direct-to-consumer business online. Chodler said he sees the brand continuing to work with scrappy boutiques and other wholesale partners, but that he knows the brand can rely on its own resources, now, to make sales.

“We’re basically picking and choosing who we’re working with now, and assessing whether they are solid, too,” he said.

The challenges of recent months have also underscored the brand’s philosophy about producing modestly, and only to demand. “We’ll never have an overflowing warehouse with product that we can’t sell,” Scorer said. “We could not be in business after 10 years and be privately held if we had gone down that path.”

Brands must resist the urge to grow bigger, faster, with little regard for the consequences, he said, as attitudes like that can only breed waste.

“We have to resist the temptations that come at us from all directions,” he said, like pursuing new product lines in search of a quick buck. “We know what we do, we understand our skill set, and we want to enhance that.”

And while the pandemic’s impacts to the global supply chain have renewed interest in the romantic notion of Made in the U.S.A., Chodler intimated that companies need to do some soul searching, in addition to reviewing their P&Ls, before making decisions. Manufacturing stateside might mean lower margins and slower growth.

In the face of a crisis that has toppled seemingly immovable retail stalwarts, though, Project Social T’s brand of success could come en vogue.

“You don’t have to rule the world,” Chodler said. “You can just be happy with what you’re doing, and do it well. That’s my focus.”