Coronavirus is weighing on retail more heavily than the world could have imagined.

Unemployment is climbing across all sectors in the U.S., and the numbers of furloughed or laid-off workers are adding up quickly in retail.

Nearly 17 million Americans filed for first-time unemployment benefits in a three-week period, and that number is guaranteed to rise as COVID-19 continues to wreak havoc on both the health of Americans and the economy.

On top of gig-economy workers who have lost their jobs, a surge in furloughs on the retail front have exacerbated an already staggering spate of job losses. That’s because big-name retailers are joining mom-and-pop stores and apparel boutiques that are forced to temporarily close doors as non-essential businesses in the era of state and city shelter-in-place orders aimed at slowing the spread of the coronavirus.

Macy’s Inc. announced plans to furlough nearly 130,000 employees as stores continue to remain shuttered and revenue runs dry. J.C. Penney has furloughed almost all of its 90,000 store associates, and Gap Inc. has furloughed its store associates, totaling roughly 80,000 employees. When including other known store associate furloughs–10,080 from Designer Brands Inc., 7,000 from Capri Holdings, 6,000 from Under Armour and 5,800 from Hanesbrands, to name a few–the total known number of workers already impacted has skyrocketed to more than 524,000 in the roughly three-week period ended April 9.

The total number of furloughs in retail and apparel, however, are actually far higher when including all components of a business and not just those working at stores.

TJX Cos., for example, is furloughing 268,000 store associates and staff from its distribution centers, while Ascena Retail Group is laying off at least all 40,000 part-time store associates, in addition to some full-time store staff and half of its corporate associates. Stage Stores Inc. is furloughing nearly all of its 13,000 employees save for 80, which means all store associates, and virtually all warehouse, field support and most corporate staff will be off of its payroll. REI is furloughing roughly 14,000 employees, which includes all store staff and one-quarter of its corporate associates. H&M Group, through a combination of layoffs and furloughs, is temporarily shedding “tens of thousands” of its staff as stores in North America and Europe remain closed.

For now, it seems many of the jobs impacted are being classified as temporary furloughs, meaning retail could more easily be restarted once the worst of the pandemic has passed. On the social side of things, it should also mean workers would be recalled and their pay resumed once stores reopen. Amid the furloughs many retailers have at least agreed to honor healthcare benefits for eligible employees.

At the other end of the spectrum, there are some retailers for which demand has ramped up, prompting additional hiring. As consumers shift their focus to essentials like food and other household necessities, retailers that sell these goods are experiencing a much brighter side of things.

Walmart, for one, said it will hire 150,000 workers for its fulfillment and distribution centers in order to better provide key items to meet consumer demand. Similarly, Dollar General said by the end of April, it would ramp up staff by 50,000. Fellow discounter, Dollar Tree Inc, which operates its namesake store as well as Family Dollar, has plans to pad its store staff by 25,000.

Beyond value, consumers are focusing their spending at online grocers and those offering other conveniences for delivery, which is why Amazon has seen demand tick up during America’s shelter-at-home period.

On Monday, just a month after hiring 100,000 additional workers across its fulfillment centers and distribution network, Amazon said it will hire another 75,000 employees to aid in its efforts to ensure shoppers have essentials, plus the few discretionary items some may be slowly coming around to purchasing.

Here’s a look at hires versus cutbacks in a retail sector increasingly split but what’s needed and what’s less so. 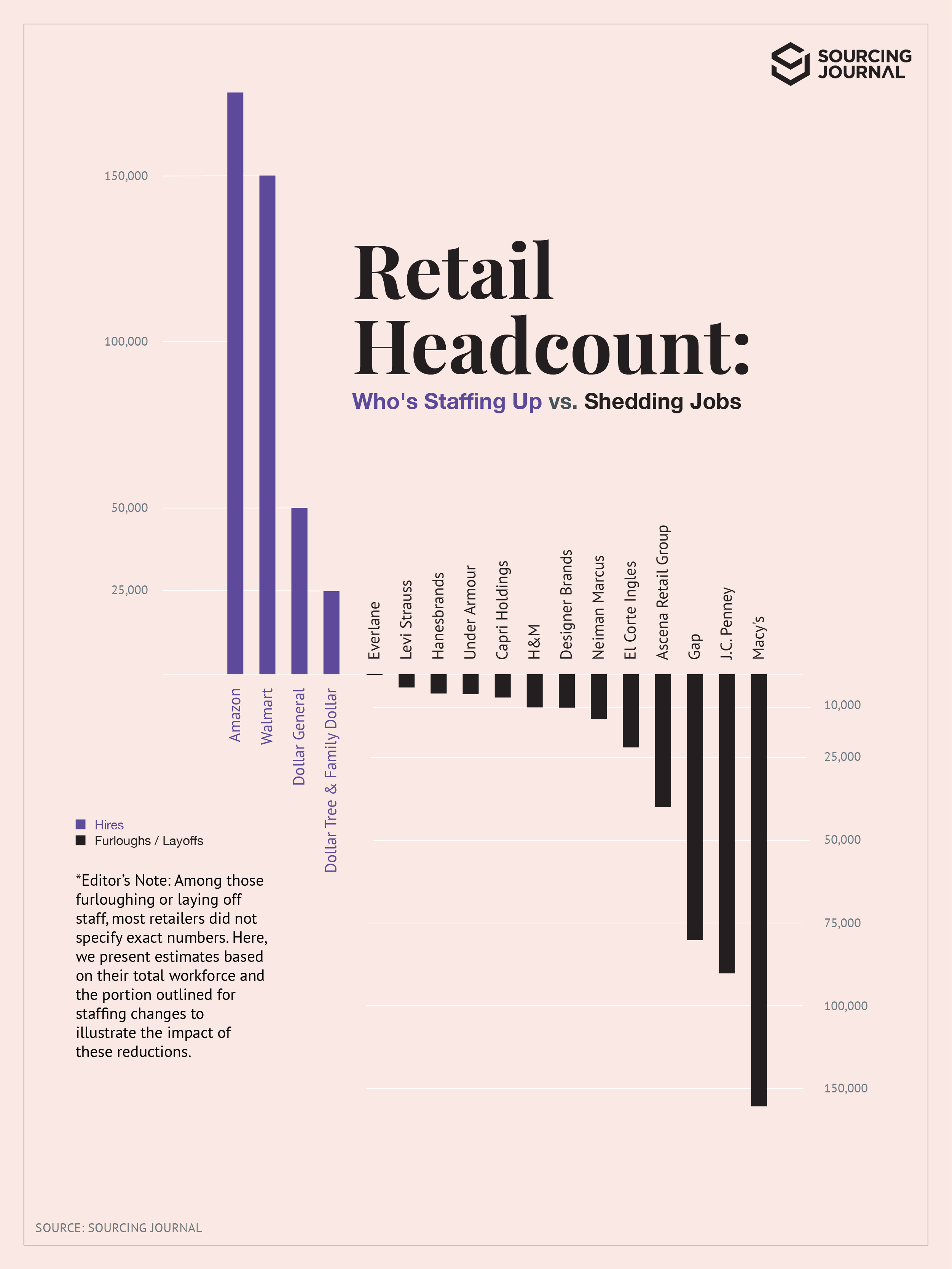