Sears and Kmart have removed a polarizing piece of apparel from their e-commerce sites after eagle-eyed Twitterati questioned why the garment was offered for sale.

A T-shirt branding Ashli Babbitt an “American Patriot” is no longer available for sale on Sears.com or Kmart.com. Supporters of former President Trump have turned the death of Babbitt, an Air Force veteran who was fatally shot trying to smash through a barricade during the deadly Jan. 6 attack on the U.S. Capitol, into a symbol of the struggle to overturn a 2020 election that right-leaning politicos believe to be illegitimate—a widely debunked conspiracy theory that the 45th president continues to promote. The product description said Babbitt was “killed defending liberty” and called on shoppers to “honor her today” by purchasing the shirt.

On Tuesday, Vox journalist Aaron Rupar tweeted about the black tee, whose red, white and blue American flag motif and lettering touted Babbitt’s dubious status as a hero loyalist. The post, which received 5,300 likes and 2,300 comments, prompted the Sears Twitter account to respond the same day by thanking Rupar for “bringing this product to our attention” and noting that the shirt was taken down from its e-commerce site.

But the damage was already done. Twitter users excoriated Sears for not just selling the offending item but its seemingly lackluster response as well. @BetaRayBob1 asked the Transformco-owned retailer to “explain how it got there in the first place and when will the responsible parties be fired? Also, a message reaffirming your commitment to democracy and the rule of law would be helpful.” @JoycePainter10 described Sears offering the shirt for sale as “pretty emblematic of what has gone wrong with your company.” 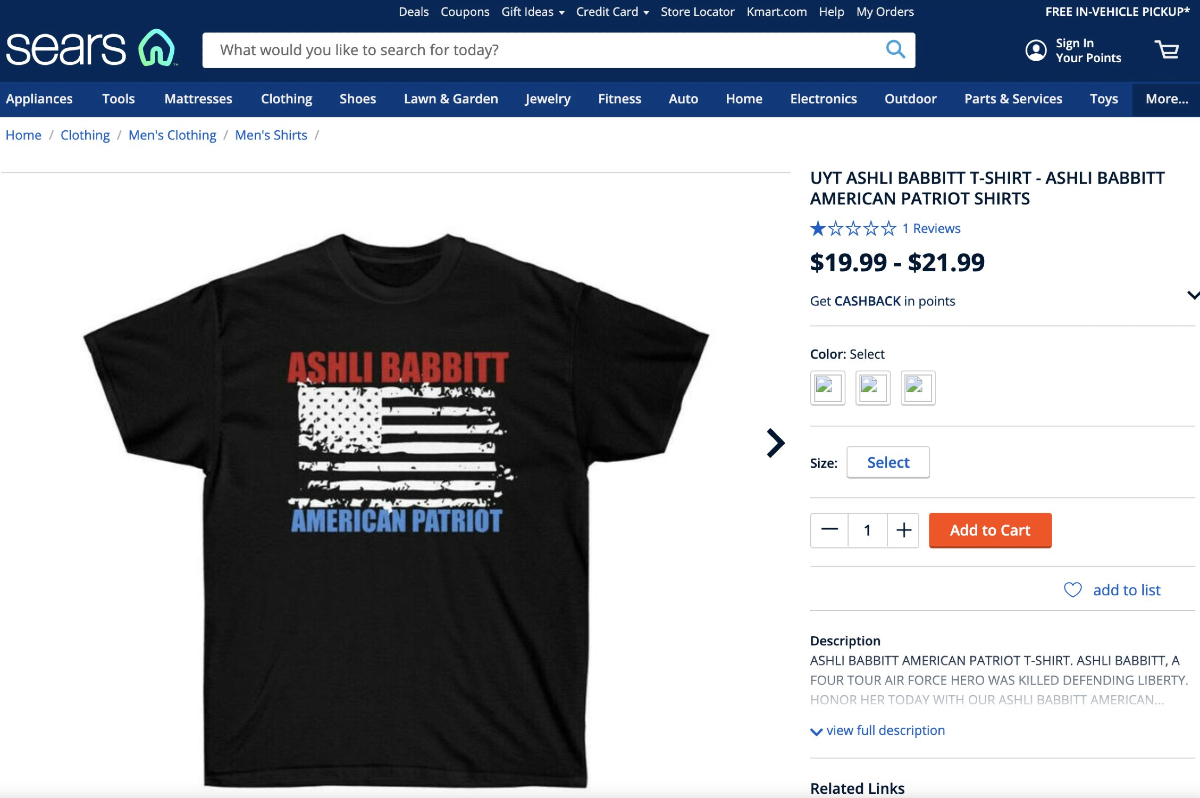 @Rokeypdx got to the heart of the matter by asking, “Do you know what merchandise is sold on your site?”

It’s a question that has plagued retailers allowing third-party products to appear on their platforms.

Online giants have long struggled to keep questionable goods out of their marketplaces. Amazon was caught selling a “Blue Lives Murder” shirt after previously hosting for sale a T-shirt depicting George Floyd’s death at the hands of a Minneapolis cop who has since been convicted of murder. And last summer the digital behemoth deleted a listing for a shoe described as “n-word brown” after a British Parliamentarian called attention to the slur, before pulling down shirts bearing the phrase “Joe and the Hoe” that disparaged then-vice presidential nominee Kamala Harris. Even Walmart is on the receiving end of a lawsuit after Kanye West asked the mega retailer to remove bargain-basement knockoffs of his Yeezy Foam Runner footwear from its marketplace.

Transformco didn’t immediately respond to a request for comment. But the imbroglio seems to underscore Sears’ status as one of America’s least-reputable companies, according to a May Axios-Harris Poll 100 that ranked the retailer above only Wish.com, Facebook, Fox Corporation and the Trump Organization.

“Sears doesn’t resonate with anyone these days,” Forrester’s Sucharita Kodali told Sourcing Journal at the time.