Breakout fashion blog Something Navy has evolved from a destination for sartorial inspiration to a bona fide business.

Launched in 2009 by blogger Arielle Charnas, the passion project quickly bloomed into a suite of brand collaborations ranging from Tresemme to Stuart Weitzman. In 2017, Charnas’ partnership with Nordstrom brand Treasure & Bond sold more than $1 million in just 24 hours, leading to the creation of an in-house Something Navy line, which garnered a staggering $4.4 million on its first day in stores during September 2018.

So naturally, a year later, ideas for a standalone brand began to take shape. Direct-to-consumer expert, founder and investor Matt Scanlan, who has grown Naadam into a robust cashmere business, took the helm as interim CEO as the Something Navy lifestyle label prepared to launch, gleaning consumer insights from Charnas’ long-loyal legion of followers. Even before the brand was set to debut in March, it was valued at $45 million, amassing investments from Vanterra Capital, Box Group, M3 Ventures, Silas Capital, Third Kind Venture Capital and Rent the Runway co-founder Jennifer Fleiss.

But then the COVID-19 crisis hit, pressing pause on the reveal of the company’s new e-commerce platform and retail store in New York City’s trendy West Village.

After fits and starts, the brand finally launched last week, four months after it was originally set to hit the web. On its first day, Something Navy generated total gross sales of $1 million, and a 100 percent sell through on products. The site garnered nearly 5,000 orders within the first hour, and more than 80,000 shoppers flooded the site within the first 30 minutes.

“This launch has been a long time coming, but it was really important for us to do this the right way,” Scanlan told Sourcing Journal.

Host With the Most: Why Customers Are Shilling for D2C Startups

In addition to difficulties arising from COVID’s impact on the retail sector, Charnas herself fell ill with the virus in March, prompting criticism from fans and followers about her ease of access to testing and the fact that her family decamped to the Hamptons shortly after she was diagnosed.

The debacle highlighted the challenges that come with building a brand—albeit a successful one—around a single personality. Charnas’ role as a tastemaker is inarguable, but the public backlash that followed her handling of her diagnosis was swift. Followers even called on Nordstrom to cut ties with Charnas, and the retailer responded with a tweet indicating succinctly that the partnership ended in 2019, after the last joint collection dropped.

According to Scanlan, the safety of the Something Navy team was the brand’s first priority in delaying the launch. But in the months that followed the outbreak, national protests surrounding the death of George Floyd and countless other Black people began to weigh on the minds of leadership, too.

“In more recent weeks, that has meant taking a long, hard look at our brand values and our representation,” Scanlan added.

Branding the national reckoning “a long overdue wake up call,” Scanlan said Something Navy has used this period of lockdown as an opportunity to reflect. As a burgeoning brand on the brink of success, Scanlan and Charnas both decided Something Navy had a responsibility to take action to prioritize diversity using its massive platform.

“We’ve made the commitment to ensure that is in the foundation of the brand moving forward, so it is an ongoing focus,” Scanlan said. “We wanted to make sure that our efforts are not just a ‘quick fix’ but actionable, structural changes.”

While Scanlan argued that Something Navy has always striven to be inclusive, the past few months have prompted a reimagining of its look and feel. “That is why we made the decision to reshoot our launch campaign and e-commerce images to reflect our values and our Something Navy community,” he said.

The company will position its platform as a resource for fans on allyship and highlight people of color in its content moving forward, he added. All proceeds from July sales will benefit the Loveland Foundation, a resource for Black women and girls that provides funding for therapy, along with educational opportunities. Moving forward, 10 percent of profits will be donated to charitable organizations.

Something Navy has made a commitment “to listen and learn along with our community” Scanlan said. Relationships with readers-turned-customers have proven invaluable to the brand over the past 11 years, and the public has not been shy about the products, campaigns and actions it would like to see.

“In terms of strategy and business plans, we’re learning it’s more important than ever to prioritize the consumer’s wants and needs—but that is the essence of the Something Navy brand,” he added. “This brand was intended to be an ongoing conversation between Arielle and her consumers, and it will continue to be so moving forward.” 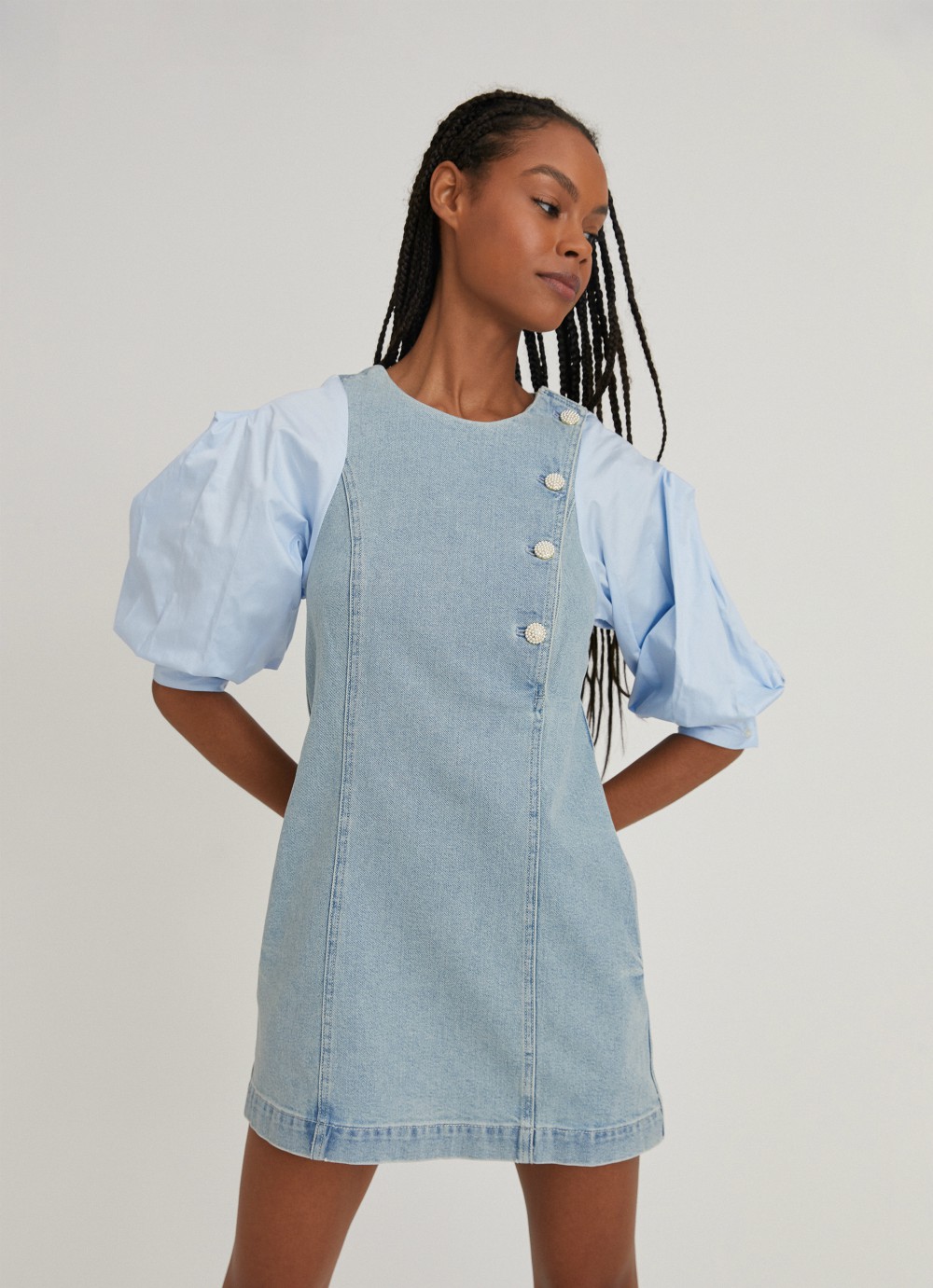 Though the basis for Something Navy has always been Charnas’ personal style, she has engaged in an open dialogue about everything from potential product categories to store locations, preferred color ways and design details.

“During quarantine, Arielle has been keeping tabs on when and what her customers want to shop that really helped inform us about the launch collection and timing,” Scanlan said. “We received a lot of feedback that people were ready to start shopping again and planning for the future, and that people still want to prioritize comfort and lounge wear.”

That feedback informed the last-minute addition of a cozy sweatshirt and sweatpants combo—dubbed the Meghan set—to the launch collection.

Named after Something Navy’s employees, each design from the brand’s first drop was informed by conversations, feedback and analysis of followers’ shopping habits. “It was a mix of staple items, trendy pieces and styles that consumers most wanted to wear right now,” Scanlan said. “As we get into late summer, we’re introducing swim and sets and additional core items that will make up a Something Navy wardrobe.”

The fledgling label launched with 11 styles ranging from blouses to denim, dresses, jumpsuits and a sweatsuit in a range of colors and patterns, with price points from $65-$200. Multiple collections will be released throughout the year on SomethingNavy.com, and each will feature an expanded selection of lifestyle products, including home essentials. The line is designed by creative head Junko Hirata, a veteran of women’s contemporary brands Tanya Taylor and Ulla Johnson. 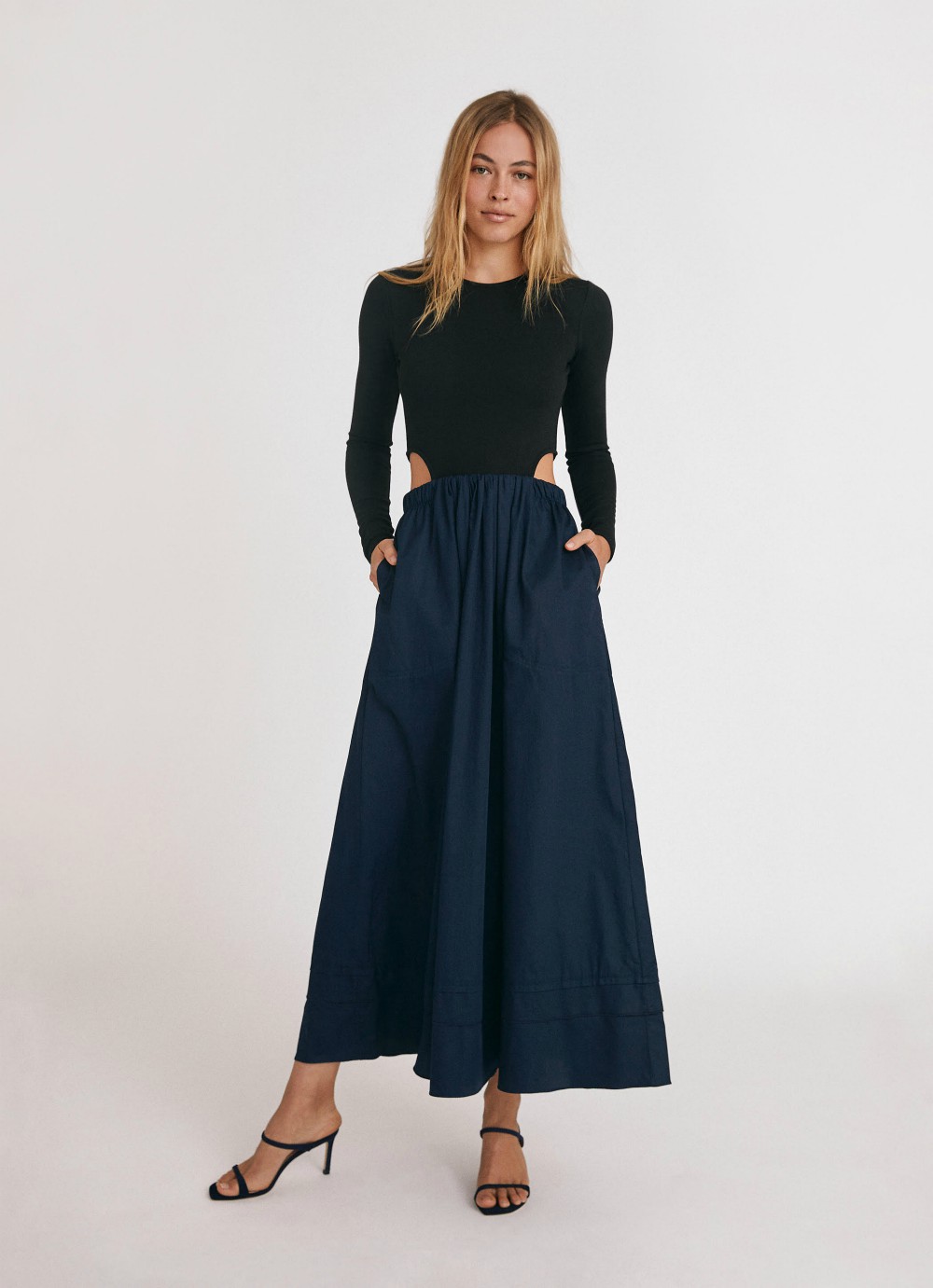 Scanlan said Something Navy, like most players in the apparel space, has faced logistical disruptions in its supply chain, underscoring the initial factors that prompted a later launch.

“As we manufacture across most of Europe, Asia and South America, we have dealt with delays and a shifting manufacturing landscape,” he said, adding that Something Navy has switched sourcing between countries multiple times throughout the pandemic, further postponing its debut.

“To mitigate the uncertainty related to manufacturing delays and country-wide shutdowns, we have begun double sourcing product from different countries,” he said. “We have found that this generally is not a great process,” he added, as it’s much more efficient to produce closer to where product is developed.

However, Scanlan said, partners have found reserves of patience with the changing timelines. “We find that manufacturers understand that we have to take unique measures for these unprecedented circumstances.”

And despite the supply-chain hiccups, the brand-new label has already proved its concept. As it irons out logistics over the coming months, Scanlan said it will continue to rely on its secret sauce—shopper insights—for clues to future success.

“We’re in a unique position where we always know the styles will resonate with our consumers,” he said. “[Charnas] is creating them specifically based off conversations, feedback and shopping habits directly from her community.”