Following a year of unrelenting hardship, retailers have been looking toward turning a corner this spring.

As vaccinations continue, consumers are evincing a sense that life could soon resume its normal pace. Behind the scenes, however, brands have been scrambling to plan for the budding demand. Delays at U.S. ports that began last fall have stretched into spring, and a speedy resolution has already proven unlikely as the backlog clogs critical points of entry. Retailers are also contending with an excess of semi-relevant hangover stock, and struggling to bring in new offerings while also clearing stale inventory.

These logistical vexations have thrown yet another curveball in retail’s direction. And as the sector maneuvers to dodge it, the spring selling season is flying by.

In mid-April, Sourcing Journal visited Santa Monica’s Third Street Promenade—a prime Los Angeles shopping destination for tourists and locals alike. While the streets were bustling with masked consumers, the state of store shelves proved a counterpoint to the crowds.

At Nordstrom, shoe displays and wall shelving were remarkably barren, void of the assortment of sandals and sneakers shoppers have come to expect from the department store—especially midway through spring. An associate in the footwear department who told Sourcing Journal that the store was running low on seasonal inventory due to “delays” said he was advising shoppers to visit Nordstrom.com for a wider selection of goods to be shipped from elsewhere within the company.

Another associate in the womenswear department also recommended the retailer’s e-commerce channel when asked about spring dresses and occasion wear, noting that the store was still largely serving shoppers a menu of lounge staples and casual garb, like denim. Many of these items appeared to be holdovers from autumn, blended into the relatively small assortment of new shorts and frocks. A large rack of markdowns occupied prime real estate on the showroom floor.

Influencers Were Really Good at Pushing These Products Last Year

Down the street at Madewell, “seasonless” attire reigned supreme, with denim, T-shirts, blouses and button downs occupying much of the store’s shelves. An associate held out hope that warm-weather staples like sun dresses would be coming in the next shipment of goods, though the bulk of those products had not yet arrived. Urban Outfitters and Hollister appeared comparatively well assorted with young-adult favorites like crop tops, swimwear and denim cutoffs, though both stores also boasted robust sales sections brimming with last season’s sweaters and lounge sets.

Culver City’s upscale Platform outdoor shopping center, home to a trendy smattering of California cool boutiques, better camouflaged any assortment issues. Racks appeared well-spaced and tastefully sparse, featuring a mix of spring staples and layering pieces for brisk L.A. evenings. But associates were vocal about the issues their businesses had faced in recent months, noting that beneath the surface, things hadn’t been so easy.

“One-hundred percent, we have seen delays,” a stylist at The Optimist, a contemporary menswear specialty retailer, told Sourcing Journal. While the boutique carries a number of easy-to-access local labels like Clae footwear and Americana-inspired apparel brand Yony, he noted that the store is still waiting on spring shipments from European suppliers, which make up a sizable portion of its inventory. 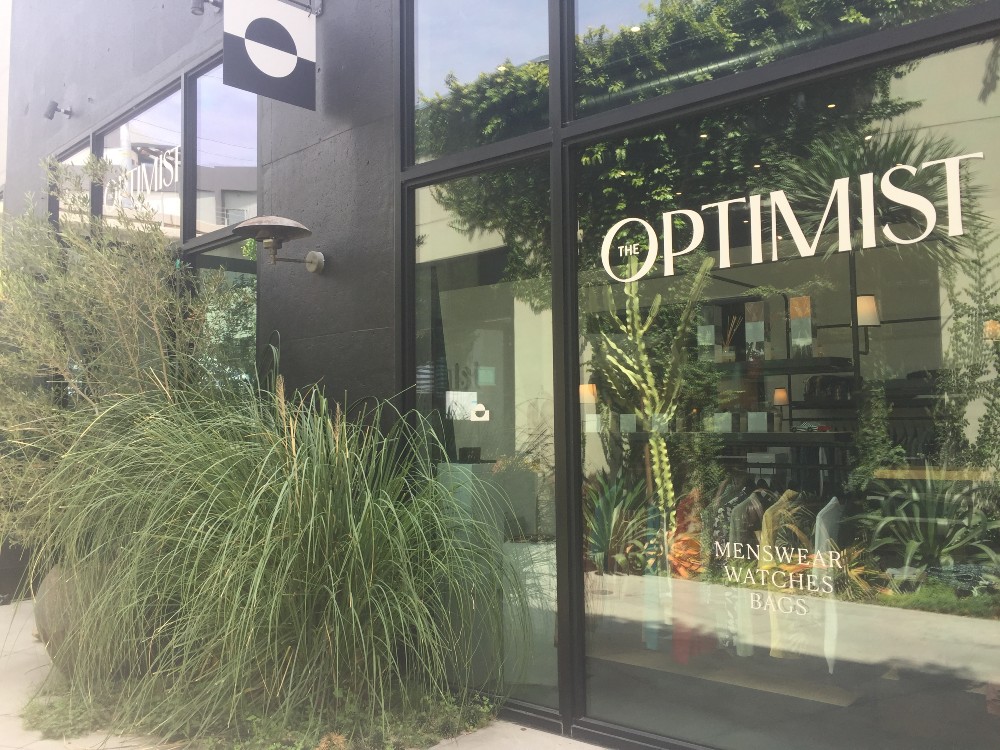 Some Made-in-the-USA brand partners have also faced supply-chain difficulty this spring when it comes to obtaining their dyes and componentry from overseas, he added, delaying their domestic manufacturing and ultimately, their shipments to The Optimist.

California’s mild climate has been a saving grace, he added, noting that the store carries a number of year-round staples like T-shirts and easy-wearing joggers that will serve shoppers as well this spring as they did in the fall. But eagle-eyed regulars and in-the-know buyers crave newness, and they’re already looking for summer shorts and short-sleeved button-downs to wear to a growing roster of social engagements, he added.

“We really have a whole bunch of seasons going on at once,” the associate said, noting that the store currently carries some unsold goods from spring of last year, fall 2020 leftovers and brand-new items. “It’s good to keep this stuff because sometimes we have cold L.A. days. But as the days get warmer, some people are like, ‘Well, this is really last season. I don’t want to wear this.’”

The Optimist, which operates on a consignment model, is also managing an excess of true fall merchandise that occupies a whole room in the back of the store. Its mostly boutique brands regularly request that at least a portion of their unsold goods be sent back to them at end of season, the associate said, but many labels have given the store license to further slash prices and liquidate inventory this spring.

“If you’re not a household brand, like Dior and Louis Vuitton, it’s not going to retain value,” he said of the off-season duds. Furthermore, some brand partners simply don’t want to pay to have the goods shipped back to them—and then have to contend with selling it themselves.

The small storefront at neighboring womenswear boutique Guild was well-stocked with warm-weather garb that Saturday, though lounge staples—like custom tie-dyed Nike and Champion sweatshirts—also lined the racks in equal measure. An associate said the store, which deals in high-end apparel from American and European makers—including Agolde, Stateside, and Pharaoh—faced overseas shipping delays, but those aren’t the only factors hindering spring arrivals.

“Designers slowed their production down” throughout 2020, the associate said, in keeping with the contraction of consumer interest. Even after manufacturers recovered from their spring and summertime issues, including Covid-related closures, small brands have had trouble predicting what shoppers will need in a world on the cusp of recovery. “Do they need to produce a line of blazers, or resort wear? Are people going back to work, or going on vacation?” she said.

“[Brands] are trying to customize their wholesale strategy to adjust to the demands of right now,” she added. “This time of uncertainty has generated more uncertainty.”

In practice, that has largely meant that Guild’s brands are pulling back on the size of collections—which were already modest compared with mass-market labels. Designers are defaulting to year-round basics versatile enough to be worn at home, on Zoom calls and out to brunch with friends.

The store has had to adjust to brands’ fluctuating strategies, as well as their pushed-out timelines for deliveries, the associate added. Production issues persist no matter where brands are doing business, and that has meant that retailers like Guild must deal with a degree of “flakiness” in their communications with partners, the associate said.

Amid these quandaries, the store has tried to scrub away the influences of prior seasons in an attempt to pique shopper interest and leave 2020 in the rear view, she added.

“We had to do massive sales of like 70 percent off in order to get through [the merchandise]. You want to be able to bring in something fresh,” she said. “If you’re coming in regularly, and you see the same thing, you’re less compelled to buy—and less compelled to come back.”

According to professor Mark Cohen, director of retail studies at Columbia University, “2020 was a lost year, and spring 2021 is a lost season.”

While retailers are “looking forward to this enormous bounce in apparel and accessories as people come out of their sweats and pajamas and into the sunlight, we’re not there yet,” he added.

Shoppers embraced e-commerce with open arms over the past year, relying on online channels for everyday home essentials as well as apparel. Meanwhile, brick-and-mortar business plummeted. While a report from Coresight Research showed shoppers spending healthily this spring on goods tied to holidays like Valentine’s Day and Easter, McKinsey analysts cautioned that digital will continue to dominate, causing concern among traditional retailers and independent stores.

Cohen said retailers are up against a history of “very little business last spring…so their comparative basis for performance is very much in their favor.” Retail players also offloaded a tremendous amount of expense in furloughs and layoffs over the course of 2020, he added. Those cuts, along with the “hoteling” of inventory from last spring, have trimmed their operating expenses and helped preserve margins.

“In some cases the product is indistinguishable from what they would have put on the shelf this spring,” he added, “and in some cases that kind of looks a little odd—a little choppy, a little inconsistent.”

According to Cohen, inventory issues were likely inevitable. “Virtually no [retailer] in their right mind would have let loose a conventional sales plan for the spring,” he said. “Most, if not all, would have some Frankenstein-like plan,” he said, describing a strategy of amalgamating product from different seasons, while relying on e-commerce to prop up brick-and-mortar anemic traffic.

“Even if there were no transportation delays, no shortage of containers, and if Trans Pacific shipping was moving like clockwork, we’d still be dealing with the struggle,” Cohen added. “There would be more goods on the shelf, but it wouldn’t fundamentally change the direction of the tides this season.”

Stores might be doing a bit more business had these challenges remained at bay, he said, “but they still wouldn’t have a normal assortment available for sale—and customers still would not be shopping as if it were 2019.”

While Cohen believes retail will indeed recover in time, he doubts that a return to normal spending patterns is imminent amid the uncertain conditions that retailers like Guild described. It remains to be seen whether the mass casualization that seized 2020 will stick, further destroying the need for business-casual attire. Events and occasions to dress up remain few and far between for the moment. Consumers without plans are hard to plan for, he added.

“The light at the end of the tunnel is probably going to feel a lot more like the sun than an oncoming train” when that moment comes, he said. “But we’re still in the tunnel.”