UK fashion chain Next closed e-commerce, then re-opened it, then closed it again.

After partially reopening its online store for 90 minutes early Tuesday morning, the British apparel and home goods retailer shuttered its website upon reaching its self-imposed limit on the number of customer orders it would fulfill.

Although nearly 40 percent of shoppers say they are spending less on clothing, footwear, fashion accessories and jewelry amid the COVID-19 health emergency, according to a study from Coresight Research using data from the week of April 8, Next’s brief period online suggests that there may be growing demand again for apparel the longer the crisis lasts. As many as 70 percent of shoppers told Coresight they initially expected it might take three months or more to see feel comfortable and confident in returning to their pre-COVID-19 shopping habits.

Next, which operates about 500 stores in the U.K. and Ireland, shut down brick and mortar on March 23, a day before the U.K. went into lockdown, and halted its online business, which generates more than half the company’s revenue, on March 26, bowing to pressure from warehouse workers concerned about their health. On Tuesday, Next said it had partially reopened its online operation after implementing “very extensive additional safety measures” and consultations with staff and its recognized union, USDAW.

Upon opening at 6 a.m. GMT, Next offered a limited selection of categories to shoppers including childrenswear and small home goods items until it reached its limit at 7:30 a.m. The retailer indicated that other product ranges may be added at a later date. Next limited how many items customers could order based on what it believed could be picked safely on any given day, but the retailer did not specify how many it would sell before stopping orders.

After halting orders, Next converted the website to “browse only” until the morning of April 15, when it is scheduled to reopen again.

Recession, Inflation and AI Make 2023 a Tricky Year to Predict 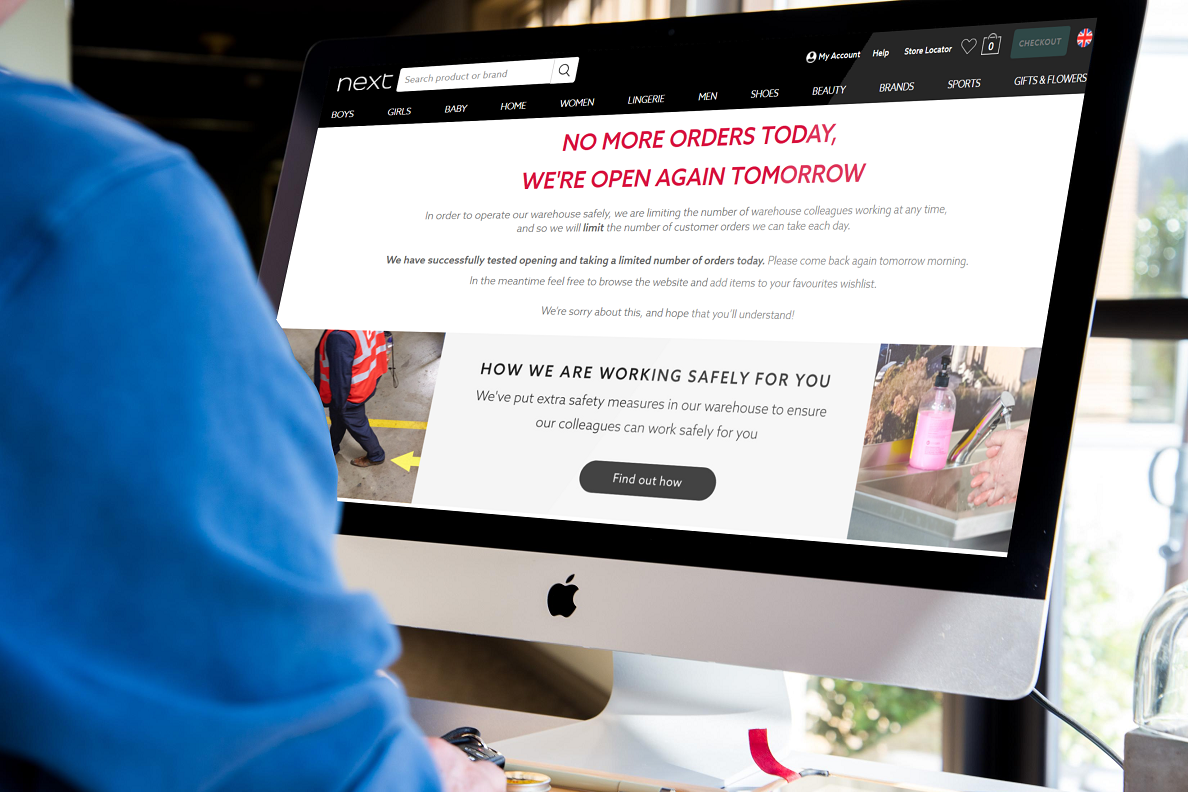 Apparel has been one of the hardest hit sectors in retail given its non-essential nature, particularly as shoppers are largely staying indoors and social gatherings and events have been cancelled globally. Already forecasting a paltry 2020 growth rate of 0.5 percent throughout the U.K. prior to the COVID-19 outbreak, management and consulting firm Alvarez & Marsal now predicts apparel sales to plummet 26.7 percent throughout the year.

The Alvarez & Marsal study indicated that 72 percent of U.K. shoppers have prioritized spending on essentials rather than discretionary purchases since the outbreak of the virus began, so Next’s partial restoration of online operations may be a promising sign that consumers are becoming more comfortable with purchasing for discretionary items again.

The retailer is limiting its online operations not due to shopper habits, but rather as a result of newly implemented employee safety measures. “The idea is to begin selling in low volumes, so that we only need a small number of colleagues in each warehouse at any one time, helping to ensure rigorous social distancing is complied with,” Next said in a statement.

While its e-commerce site was shut down, Next has reorganized the way its warehouses operate, maintaining a two-meter (more than six-foot) social distancing rule, whether someone is working at a fixed station or on a mobile task such as picking or loading. Employees who have a high temperature, a continuous cough or are required to self-isolate—or live with someone with those conditions—do not have to return to work.

Additionally, the company has implemented enhanced sanitization measures and is ensuring safe movement throughout its warehouses, mainly through setting up clear one-way systems and new walkways.