Some Chinese exporters are going to extreme lengths to avoid the hit from Donald Trump’s tariffs.

Vietnam said on Sunday that it found dozens of fake product-origin certificates and illegal transfers by companies trying to sidestep U.S. tariffs on everything from agriculture to textiles and steel. It was one of the first times an Asian government has publicly alleged such misbehavior since trade tensions between the world’s two biggest economies escalated this year.

The statement from Vietnam, which pledged to increase penalties on trade-related fraud, adds to concerns that some Chinese exporters are illegally rerouting orders after Trump imposed tariffs on $250 billion of Chinese goods and threatened to target an additional $300 billion. U.S. trading partners including Vietnam face growing pressure to stop on illicit exports as they seek to avoid being hit by tariffs themselves.

Vietnam is concerned it may be punished by the U.S. for allowing mislabeled Chinese products to flow to America, Do Van Sinh, a standing member of the National Assembly’s economic committee, was quoted as saying in the government’s statement.

The Southeast Asian country’s reported shipments to the U.S. have jumped this year as China’s have slumped. While there’s evidence that some of those gains are due to shifting supply chains, analysts have questioned how much of the recent surge is legitimate.

Fraudulent cases discovered by Vietnam’s government include packaging on Chinese goods being changed to say “Made in Vietnam” before certificates of origin are processed. The government cited an example of U.S. customs officials uncovering Chinese plywood being shipped to America through a Vietnamese company.

“A cottage industry for circumventing U.S. tariffs will likely bloom, given the high tariff rates and huge potential profit,” said Chua Hak Bin, a senior economist at Maybank Kim Eng Research Pte. in Singapore. “ASEAN governments will likely crackdown on such re-routing for fear of being seen as a backdoor,” Chua said, referring to the Association of Southeast Asian Nations.

Questionable shipments are likely to be a “relatively small” portion of China’s total exports to the U.S., said Rahul Kapoor, a senior analyst at Bloomberg Intelligence in Singapore. “There will always be leakages and work arounds to avoid tariffs, but we do not see it as a widespread phenomenon,” Kapoor said.

Vietnam already faces scrutiny from the U.S. after the Treasury Department added the country to a watchlist for currency manipulation last month.

Vietnamese authorities have said the exchange rate won’t be used to create an unfair trade advantage, even as they’ve grown concerned that the U.S.-China conflict will hurt economic growth. Deputy Prime Minister Pham Binh Minh told the National Assembly last week that gross domestic product could drop 6 trillion dong ($256 million) in the next five years because of the trade war. 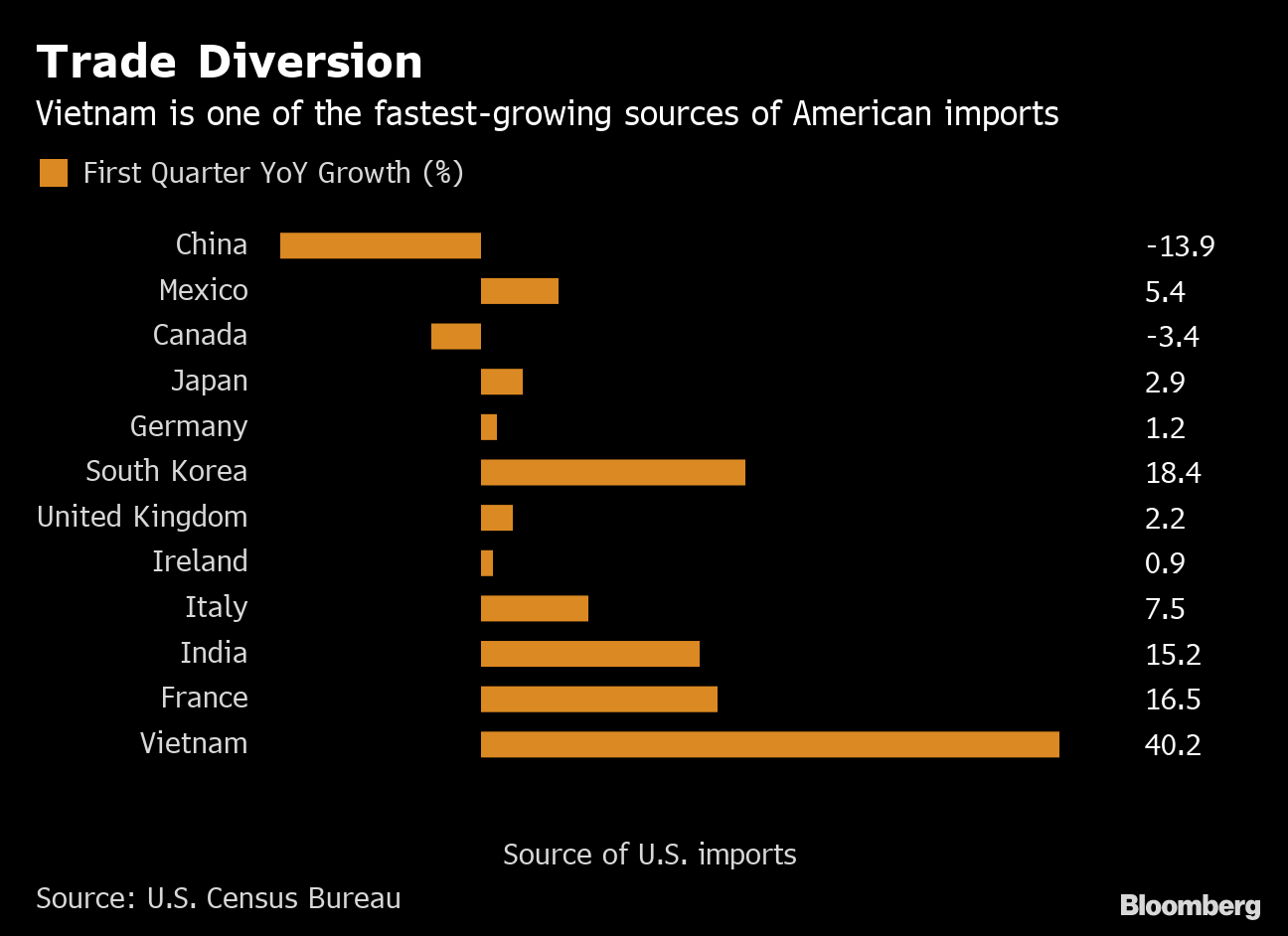