The hot-takes reporting on Covid’s impact in fashion prompted our team at Cornell University’s New Conversations Project to ask some long-view questions about the future of apparel.

But we realized that we didn’t have enough data on the industry’s past to imagine its future. We needed to look back in order to look ahead. So we began—with support from the ILO—to plot the decades-long, pre-pandemic trajectories of industry consolidation, automation, e-commerce, sourcing patterns and labor practices.

We read the academic and popular literature. We spoke with buyers and brands, suppliers, unions, worker rights advocates and regulators. The result is a new paper laying out three scenarios for the industry: “Repeat, Regain or Renegotiate? The Post-COVID Future of the Apparel Industry.” This findings of this paper will be discussed in a live (virtual) debate on Oct. 12. Please plan to join us and register at the Cornell University New Conversations Project site.

In this Sourcing Journal series we look at these trajectories in turn. For all of the industry’s talk of “redesign” and “reimagining,” what’s changing direction and what’s merely accelerating along familiar lines?

First is a look at the shape of the industry. 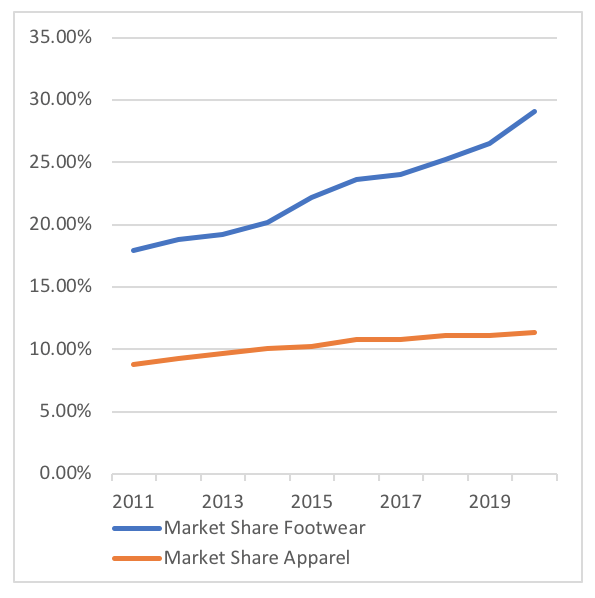 The top 10 apparel companies by global market share in 2020 included (in descending order) Inditex, Fast Retailing, H&M, Nike, Adidas, Gap Inc., PVH, Hanesbrands, Levi’s and LVMH. The composition of this group has remained largely stable since 2011 and its overall market share increased from 8.8 percent in 2011 to 11.4 percent in 2020. Not seen in this data are two of the global industry’s largest apparel retailers—Amazon and Walmart—whose growth and dominance only intensify the concentration in apparel’s sourcing and sales markets.

The rate and magnitude of market concentration are greater still in the less crowded footwear sector where the collective market share of the top 10 brands rose from 17.9 percent in 2011 to 29.1 percent in 2020.

The top footwear companies by global market share in 2020 were (in descending order) Nike, Adidas, Skechers USA, VF, Asics, Puma, New Balance, Deckers Outdoor, Wolverine World Wide and Deichmann. For comparison, these rates of change in footwear’s market concentration resemble those in luggage and bags in which LVMH (11.6 percent) and Kering (7.5 percent) dominate—travel goods analogs for Nike and Adidas. The global shares of the top 10 firms’ market share doubled from 19.1 percent in 2011 to more 38.1 percent in 2020 (Passport Euromonitor International, 2021).

In both apparel and footwear, there is no break in 2020 in the trend toward market concentration. The pandemic and the accelerating shift to e-commerce may reorder these lists in the coming years, but the analysis above shows an industry moving steadily towards greater market concentration, not less. A 2019 analysis of apparel industry profits by the consulting firm McKinsey found that “fully 97 percent of economic profits for the whole industry [were] earned by just 20 companies, most of them in the luxury segment. Notably, the top 20 group of companies has remained stable over time. Twelve of the top 20 have been a member of the group for the last decade.” As a sign of their market power and resilience, these “super winners had recovered [by August 2020] on aggregate to just 5 percent below pre-crisis [market values].”

This market concentration has been complemented by consolidation of supplier bases by apparel buyers. This process picked up speed after the expiration of the global Multi-Fiber Arrangement (MFA) in 2005 and accelerated again in the aftermath of the 2008 financial crisis.

Buyers have accelerated consolidation of their supplier bases

Brand data and interviews with senior staff from major apparel firms—leading outdoors brands, mid-market retailers, online retailers, general merchandise retailers—confirmed that consolidation of suppliers remains the long-term strategy and extends to coordinating new factory investments with familiar manufacturers. In interviews, the only variations on the consolidation theme were built around the threat (or promise, depending on geography) of growth in nearshoring by U.S. and European buyers.

The strategy of “streamlining one’s supply chain to include fewer, larger suppliers [to] help articulate end-to-end product journeys” can be seen at work across the industry over the past decade.

Nike’s consolidation of sourcing from a sprawling network to roughly half the number of strategic suppliers is one of several dramatic examples. In 2010, Nike sourced from 163 footwear factories and 631 apparel factories. In 2019, Nike sourced from 112 footwear and 334 apparel, a reduction of 31 and 47 percent in the number of factories respectively. In 2019, 93 percent of Nike’s footwear output came from three countries—Vietnam (49 percent), China (23) and Indonesia (21)—and a mere four suppliers produced 61 percent of its shoes. On the apparel side, a single factory produced 14 percent of Nike’s clothing, and five suppliers produced 49 percent of the total. China and Vietnam again dominated Nike’s production and, together with Thailand, accounted for 59 percent of the total.

Adidas reported similarly dramatic shifts in its footwear and apparel supplier bases. In 2010, Adidas sourced from 1,236 independent factories for apparel and footwear; in 2019, the company sourced from 631 independent factories – a reduction of 49 percent. Adidas bought 39 percent of its footwear in 2010 from China but only 16 percent in 2019. Vietnam was a close second to China at 31 percent in 2010 but represented 43 percent of total Adidas volume in 2019. Adidas apparel came predominantly from China (36 percent) in 2010 but had dropped to 19 percent by 2019 while Cambodia and Vietnam together had leapt to 42 percent by 2019 (Adidas, 2010, 2019).

First, the buyers’ supplier base data above makes clear that the size of its main manufacturing partners has helped fuel (and been fueled by) the consolidation of buyers’ manufacturing supplier bases. The reliance of leading buyers’ on a diminishing number of factories (and manufacturing groups) in this period of intense growth in the apparel trade clearly points to growing market concentration among suppliers.

The individual 2019 revenues of the largest supplier groups—footwear manufacturers Pou Chen at $10.5 billion and Yue Yuen at $10.2 billion—were approximately one-quarter of Nike’s 2019 revenue, they were more than one-third of Adidas’, two-thirds of Gap Inc. ($16.6 billion) and one-third larger than Puma ($6.4 billion).

Second, functions such as factory-selection and multifactory production planning are being redistributed among buyers and suppliers, and integrated. For example, H&M has packaged its supplier network and sourcing operation as a service—including product development, sourcing and logistics—for sale to the rest of the industry (See Fuller, 2020; Treadler, 2021).  At least one major Asian apparel supplier group is building an online platform for distribution of production contracts to smaller suppliers certified for quality, labor compliance and environmental standards (Asia Apparel Manufacturer, interview). Both efforts come as the long-time leader among sourcing intermediaries, Hong Kong-based Li & Fung, was privatized in 2020 at the beginning of the pandemic after three difficult years (See K, 2017; Ng & Yiu, 2020).

Our analysis of the industry’s changing shape raised big questions for us about future sourcing patterns, automation and employment levels. Garment production has, after all, been a leg up for low-income countries hoping to join the flow of global value chains. Is automation in apparel finally picking up speed? What will happen to workers, their employers and governments if apparel job growth slows or even falls?

We take these questions up in the next installment of this series. For a more in-depth look into this research, please visit the New Conversations Project.