A year into the Covid-19 pandemic, Peru has begun to reactivate its textile export industry.

During the first half of 2021, the country’s international shipments reached a total of $723 million, a growth of 86 percent compared to the same period of the previous year. In total, 1,183 Peruvian companies exported 612 products to 92 markets around the world.

Likewise, among the most commercialized products abroad are cotton T-shirts ($87 million in June, up 67 percent; and $88 million in the rest of the first half, up 118 percent); T-shirts and undershirts ($44 million, up 202 percent); combed alpaca fine carded hair ($31 million, up 83 percent) and other cotton garments ($25 million, up 96 percent).

The Peruvian textile industry offers garments made of cotton, alpaca and their different blends, which are successfully promoted in the international market. This industry is widely supported by its qualified workforce, as well as its verticality, dynamism, modernity and an export culture that guarantees clients timely dispatches and their desired volumes.

Backed by more than 5,000 years of textile heritage, Peru continues to set trends through unique and fashionable designs. The country’s garments are durable, timeless and, above all, they contribute effectively to the world’s sustainability.

The textile tradition, perfected through generations, leads to high-quality products that draw international recognition to Peru. One of the nation’s greatest advantages is unique raw materials, such as tangüis and pima cotton, as well as alpaca and vicuña fibers.

Considering the everlasting satisfaction of its clients, the Peruvian industry stands out for its qualified workforce who, in addition to cutting-edge technology and the industry commitment to the community, have made it possible to achieve high international labor standards and compliance with liability laws required by the external market.

On-time dispatches and order compliances mark the industry as one of the most efficient and modern in the country. Currently, and in order to increase the competitiveness of the textile industry, it is innovating and investing in product development to make Peru one of the main full-package suppliers in America. 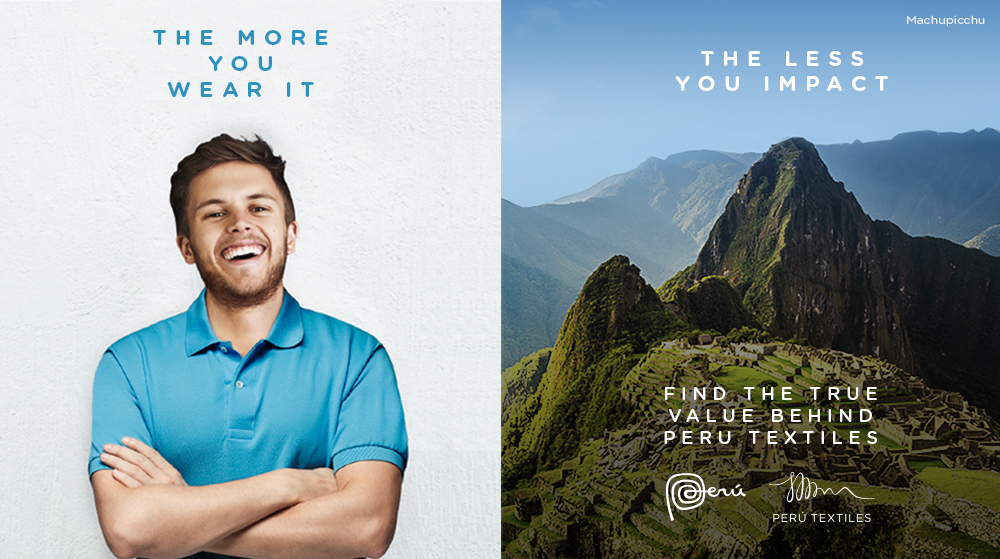 Since last year, Peru Textiles has positioned its brand around quality and sustainability. When it aimed to reach the North American market, for example, the main objective was to generate awareness of the sectorial brand and the attributes that characterize it, targeting buyers for specialized international premium brands.

One example of these high standards are exports of alpaca products, a vital feature in the Peruvian textile industry. During the first half of the year, these shipments almost doubled in value, growing 95 percent compared to the same period of 2020 and reaching $74 million. And this positive outlook is not a mere coincidence; the alpaca line has already achieved six months of constant growth compared to last year.

Peru’s top 10 destination markets also increased their purchases. China, for instance, doubled its acquisitions to reach $17 million (growing 107 percent). The export of more value-added products is being encouraged, promoting sustainable management in said offer with the support of the sector brand.

Behind the Asian giant, the United States also doubled its purchases, with a total of $14 million in the first half, as well as a positive variation of 153 percent.

Due to the above and many other factors, the textile and clothing sector is one of the most important industries in Peru. Not only is it the activity with the third highest contribution to manufacturing GDP, but it also generates around 400,000 direct jobs per year, 80 percent of which are created by microenterprises.

Moreover, the textile sector also has indirect employment impact. According to estimates by the National Society of Industries, there are 900,000 jobs generated thanks to linkages with other valuable industries such as manufactured fibers; natural resources, such as cotton; and livestock, such as wool and fine hairs.

Peru Textiles proposes a new starting point: to go back to basics. This includes understanding that the true value of what people wear and what Peru has to offer as a textile industry closely linked to the well-being of people and the world.

Social commitment is as important as the success of the business itself, because it is the success of each of those involved in creating a garment. True success only happens when everyone wins.