The 200,000-square-foot garment hub—part of the larger Made in NY (MiNY) campus that is under development in the borough’s Sunset Park neighborhood—will serve as a space to grow jobs and expand workforce training in garment manufacturing, fashion design and other affiliated businesses. According to the mayor’s office, it will create 460 fashion jobs onsite, train 500 people and bring an estimated $57 million in direct economic output to New York City.

“New York City was already the fashion capital of the United States, but the redevelopment and creation of new fashion jobs at the Made in NY campus in Brooklyn will only solidify our place as the city of swagger,” Adams said in a statement. “Slow Factory’s opening at the garment hub in Sunset Park will help create hundreds of fashion jobs onsite and bring tens of millions of dollars of direct economic output to New York City. Additionally, in New York, we are leading the way and showing that prioritizing sustainability can go hand-in-hand with the fashion industry.”

The planned Slow Factory Institute—the nonprofit’s first brick-and-mortar location—will offer educational programming and workforce training, and house a product studio and a research-and-development lab. The 18,900-square-foot space is expected to open at the end of the year. 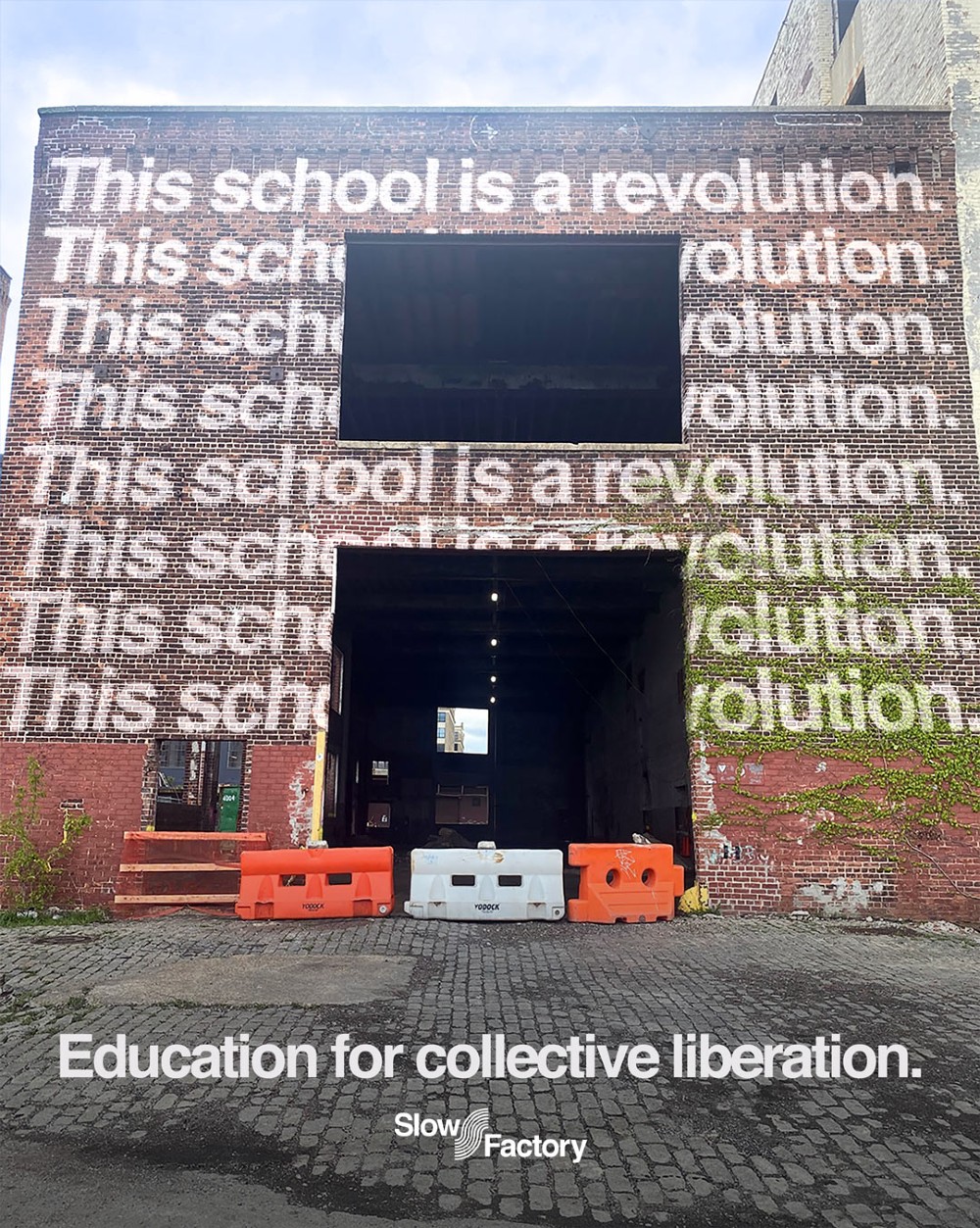 The multidisciplinary facility will give a physical home to Slow Factory’s Open Edu program. The free and accessible education series focuses on climate justice, climate solutions and climate-positive design, and has previously consisted of Zoom sessions that are later shared online. At the new brick-and-mortar location, the organization plans to further this mission by offering education and training programs that stimulate economic development and pathways to skilled employment opportunities in historically marginalized communities.

Why This New B Corp is Disrupting Its Own Supply Chain

“This school presents a revolutionary opportunity to offer a pragmatic, future-oriented curriculum in Sunset Park, Brooklyn,” Céline Semaan, executive director, Slow Factory, said in a statement. “We are working diligently to fill a critical educational gap that focuses on climate justice and human rights, while creating a community hub for education and skills training.”

This educational programming will integrate with Slow Factory Labs, a physical manufacturing facility for regenerative material innovation that focuses on the nonprofit’s plant-based leather, Slowhide. According to Slow Factory’s website, the regenerative material uses a plastic-free process to transform symbiotic culture of bacteria and yeast (SCOBY) nanocellulose into a biodegradable luxury textile.

The Slow Factory Institute will also offer waste-to-resource training programs centered around designing for disassembly. Designers will able to work from thousands of pounds of discarded clothes, returned goods and textile waste delivered to Slow Factory through its brand partners.

Slow Factory’s Sunset Park facilities are expected to include classrooms, a theater and community space, as well as the Slowhide manufacturing facilities. Local residents will have free access to all programming and events, including youth-oriented climate adaptation events and waste-led workshops focused on skills training.

The Made in New York (MiNY) Campus at Bush Terminal—also to be the home of a 500,000-square-foot film and TV production hub—is expected to open this year. The garment hub will support 25 to 35 tenants, with spaces ranging from 2,000 square feet to 35,000 square feet. The Slow Factory Institute will be the first to open, the New York City Economic Development Corporation (NYCEDC) said. The campus’ location in Sunset Park will position tenants in a district that is home to the second-largest concentration of garment manufacturers and employment in New York City, according to the mayor’s office.

“Reducing fashion’s carbon footprint is not only trendsetting, but necessary in the fight against climate change,” Rachel Loeb, president and CEO of NYCEDC, said in a statement. “Slow Factory will build on Sunset Park’s strong foundation of garment manufacturing and green innovation with cutting edge solutions and meaningful workforce development that puts New York City on a path to strengthen, grow, and change the manufacturing industry for the better.”