The supply chain as we know it has been flipped on its head over the past two years, with container prices rising in some cases to five times their pre-pandemic levels and port congestion extending lead times and sparking rampant out-of-stocks.

And in the end, the shopper is paying the price. In fact, a November 2021 survey of more than 1,100 chief financial officers by two Federal Reserve’ district banks and Duke University revealed that 80 percent of companies are passing on these rising costs to consumers as they adjust to a surge in inflation.

But as Sourcing Journal’s 2022 Sourcing Report shows, the story of the ever-so-convoluted supply chain isn’t just about the costs. For example, on the trade front, no supply chain conversation is complete without mentioning the policies and the overall tensions that have defined trade, at least between the U.S. and China.

Already saddled with significant tariffs levied by the Trump Administration, the trade relationship between the U.S. and China had been filled with speed bumps in 2021. For one, the U.S., the U.K., the European Union (EU) and Canada all placed economic sanctions on several Chinese officials in retaliation for the country’s apparent human rights violations in the Xinjiang province, where Uyghurs, Kazakhs and other Muslim minorities are allegedly being held in internment camps and detention facilities.

Republican Lawmakers Want to Blow Up 'China Trade Shock.' Will It Work?

In December, President Joe Biden signed the bipartisan Uyghur Forced Labor Prevention Act into law, which assumes that all products from Xinjiang are made via forced labor—and therefore banned from entering the U.S.—unless “clear and convincing” evidence demonstrates otherwise.

With that in mind, it is no surprise that the Biden administration is under pressure to act on issues that are more controllable, such as the tariffs.

“There was [an] explicit promise that [the tariffs were] going to be a fairly short-term measure, that might be painful, but it would pay off,” said Phil Levy, chief economist at freight forwarder Flexport. “I don’t think we’ve seen any payoff, and it’s looking less and less like a short-term measure…I think there’s going to be increasing pressure to recognize it and push toward some sort of conclusion for the tariffs or to show some results.”

Brands can’t sit on the sidelines as labor concerns linger

As the forced labor scrutiny grows, brands and retailers will have a hard time dodging any responsibility for the problem, especially as these issues gain publicity. But right now, they are still lagging in understanding the full breadth of the chain the further upstream they go. Currently, less than one in five brands, retailers, suppliers, manufacturers and sourcing agents has full visibility of all stakeholders, according to a December 2021 survey from supply chain visibility platform Serai and KPMG.

Jewher Ilham, a forced labor project coordinator at Washington, D.C.-based advocacy group Worker Rights Consortium, told Sourcing Journal that while many brands have created sets of voluntary standards in regards to their stance on international labor worries, they’re futile if they don’t translate into meaningful outcomes.

“It’s easy to publish an 800-world statement on your website,” Ilham said. “What’s not as easy, but absolutely doable and critically important, is taking precautions and measures to prevent your products from being tainted with forced labor; to really map out your supply chains and verify them. It’s a matter of will. If you claim you don’t know where you’re sourcing from or you don’t know if your items are made with forced labor or not, then you’re choosing not to know.”

Beyond the issues at the source, much of the supply chain’s ongoing disruption has remained focused on the ports, the vessels that are carrying goods there and the “middle mile” where products are delivered to either stores or distribution centers.

In the case of Express, the specialty apparel retailer has made efforts to tighten up internally to better handle the supply chain overflow.

“We diversified our carrier network and leveraged team trucks along with the rails to bring goods into the DC,” said Aparna Tewari, senior vice president, global sourcing, production and supply chain at Express Inc. “We then worked closely with our DCs to reduce the processing time by almost 50 percent. In addition to that, we increased deliveries to the stores and added carriers for the e-commerce orders to bring speed in our network.”

DTC luxury brand M.Gemi, known for its Italian leathers and small-batch deliveries, also has become more reliant on its local distribution centers to get newer product out, according to co-founder Maria Gangemi.

“To ensure that we have goods for the holidays, in addition to our U.S.-based fulfillment center, we used our fulfillment center in Milan for any of the styles on tighter delivery schedules,” Gangemi told Sourcing Journal. “Just a short ride from our workshops in Milan, our fulfillment center eliminates the risk of any flight or weather-related delays. We were, thankfully, able to live up to the high fulfillment and shipping standards we’ve set for ourselves.” 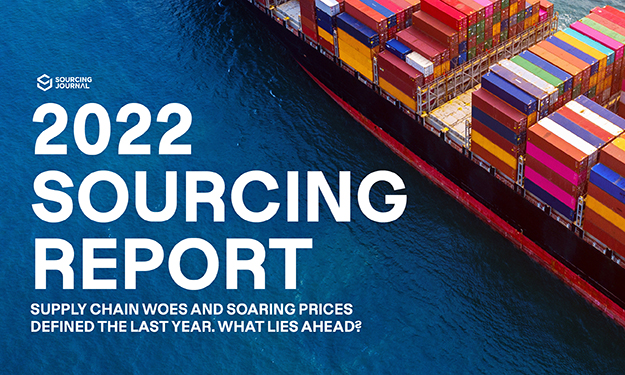 Download the 2022 Sourcing Report for more on the state of the supply chain in the year ahead, from the factory to the trade routes to the ports. Click here to get your copy.