As fashion companies scramble to optimize operations, reduce inventory risk, be more sustainable, boost working capital and cut costs, they might be wise to take a cue from the classic film “The Graduate” and listen to one word; just one word—upstream.

In the recent Sourcing Summit panel “Orchestrating E-Fashion in Manufacturing,” Brad Ballentine, CEO of Fox River Mills; Gonçalo Cruz, CEO and co-founder of PlatformE, Aslaug Magnusdottir, CEO and founder of Katla/Moda Operandi, and John Thorbeck, chairman of Chainge Capital, not only discussed this very word, but also why more businesses weren’t focusing on it.

It’s not surprising, actually, considering that 90 percent of medical patients don’t make lifestyle changes when diagnosed with a life-threatening disease, but the panel took a look at the “10 Percenters” who have embraced the upstream supply chain as part of their story and value proposition—and a way back to health.

Fox River Mills, a domestic 121-year-old vertical knitting operation, tackled this with a major technology pivot in 2019 to virtual prototyping and digital planning that focused on its suppliers.

“The design piece is just the tool; process is really where you win,” said Ballantine, who added that hit rates at the factory are above 90 percent now, while physical samples have been reduced by 70 percent and time-to-market reduced by 62 percent. “And that’s without reductions in inventory and reduction in risk, there’s a lot of things that we’ve been able to accomplish. The reduction in time to market has really allowed us to partner with retailers to reduce their inventory.”

How Vera Bradley is Strategizing for Consumer Spending Shifts

One way to reduce merchandise glut at the end of the chain—thus reducing markdowns and boosting sustainability—is to reduce inventory before it even gets produced.

PlatformE, which mainly works with luxury brands in Europe, was founded on the belief that the value chain in fundamentally broken.

“We created this platform to visualize every possible combination of a specific product,” said Cruz, who is an industrial engineer. Unlike traditional commerce or e-commerce operations where you have finite skus, PlatformE created the DKU—Dynamic Keeping Unit, also known as Digital Keeping Unit. The concept is a singular base, or chassis, with modifications stemming from orders.  So instead of coding or presetting thousands or even millions of skus, it’s just one base or sku, with many, many different iterations.

“It’s a better model for the industry, first creating and selling, and only then, prompting production, so you’re only making products that were effectively bought.”

And while many companies are working with 3D “digital twins” or avatars in fashion, it’s imperative to incorporate that into the digital transformation.

“3D alone doesn’t do anything,” said Cruz. “It’s like taking a picture. You need to add rich data. You need retail and production logic. It’s the ability to technically and operationally connect all the dots along the supply chain.” 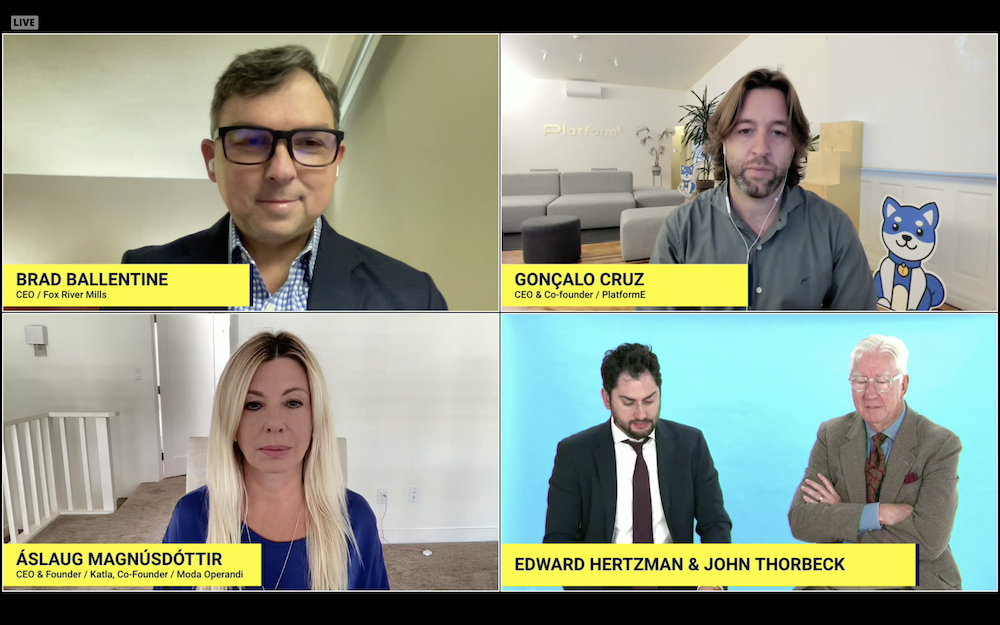 One of the biggest challenges in adopting technology, or rather not adopting it, isn’t the tech itself, but rather the culture.

“There aren’t enough companies taking drastic enough steps and really trying to change things in a big way,” said Magnusdottir, who has built the sustainable fashion e-commerce site Katla with an inventory-less model. “But the benefit of being a new company is that you can create systems from scratch or that are different. You’re not tied down to old models.”

Katla’s vision focuses on zero inventory, zero waste, and small-batch production, but she says companies who want to follow this need to embrace innovation.

“We have [corporate] cultures where people are incentivized to do more of the same but squeeze more money out of the production cost, etc.,” she said. “But the fashion industry hasn’t really encouraged change.”

Magnusdottir cites Silicon Valley as an example of the opposite, noting Google had a 20 percent work rule, where employees were supposed to use 20 percent of their time to do something different from their day to day job to innovate and try to move things forward. “I think we need to build this more into the [fashion] culture. Technology is going to be a very important part of achieving this, and to becoming better at predicting, we are using local manufacturing as close as possible to the customer.”

All these efforts contribute to less waste, and getting that sustainability message to the consumer can be achieved through social media, but Magnusdottir said it’s more about quality than quantity, and finding the right followers to channel your message.

“We’ve found much more significant results with those influencers that really were tied to the mission, even if they had smaller followings,” she said.

John Thorbeck, chairman of Chainge Capital, praised the panelists for their innovation and willingness to look to their suppliers to make change. “This is upstream innovation,” he said. “All three of these approaches have investment behind them—venture capital in the case of PlatformE and Katla, and private equity behind Fox River Mills. So there’s a vision. There’s momentum. And this is the 10 percent that we want to watch.”

To view the entire Sourcing Summit on demand, click here.