Now that holiday shopping is fully underway, retailers must cut through the noise of a “digitally dominant” season by personalizing their email communication, according to marketing technology firm Bluecore.

A new report from New York-based Bluecore, whose clients include The North Face, Tommy Hilfiger and Express, says data shows that email personalization is now a necessity for any retailer hoping to succeed in digital communication. Merchants that only personalize one-time email sends see revenues per email skyrocket 142.2 percent compared to retailers that opt for static one-time email sends, while there was a 25.6 percent jump for those who use personalized and static one-time sends. By the same token, the personalized-only emails convert at a 133.2 percent higher rate, while the mix of personalized and static converts at a 46.3 percent higher rate.

Click-through rates for fully personalized emails got an 81.5 percent boost from static, while open rates saw a 22.8 percent bump.

The new report is based on nearly 10 billion emails sent by more than 400 retail brands from March of last year through February. The timeline was chosen specifically as a reliable, long-term benchmark for retail marketers to measure their performance against that could avoid any unusual activity due to Covid-19, Bluecore says.

However, footwear actually bucks this trend, with the sector’s high spenders actually converting less (.73 percent) than their average spending counterparts (.76 percent). Low spenders in footwear came in with the highest conversion rate across verticals at .6 percent. The report noted that in this case, higher spenders may be purchasing higher quality products that last longer and create the need for fewer repeat purchases over their customer lifetime. 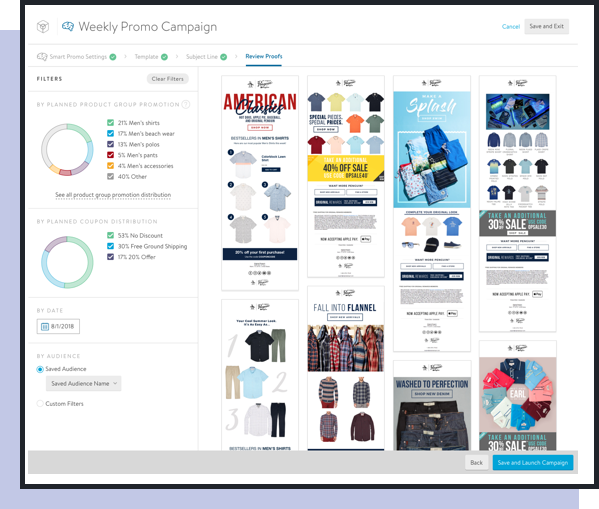 Higher spenders are also more likely to engage with emails and less likely to unsubscribe, with an average unsubscribe rate of .21 percent compared to .24 percent among low spenders. The more shoppers spend with a brand, the stronger the connection they are likely to feel, which can create loyalty to buy time and again.

Of the emails that generate the most “click-to-conversion” rates, cart abandonment tops all at 14.2 percent. That performance stems from the fact that these emails are often extremely relevant to shoppers based on products featured and that they target customers who have a high purchase intent. “Low inventory” emails also perform particularly well when looking at click-to-conversion rate, which speaks to this trigger’s ability to create a sense of urgency to purchase that otherwise may not have existed.

The click-to-conversion rates of cart abandonment (16.6 percent) and product abandonment emails (6.7 percent) are better within apparel than every vertical analyzed by Bluecore aside from the “other” category, while emails promoting a product price drop in apparel saw the best click-to-conversion rate of all sectors at 6.4 percent. Given that shoppers are highly accustomed to markdowns within the apparel space, the popularity of price drops makes sense.

Footwear had the second biggest click-to-conversion rate of one-time sends at 5.1 percent, after beauty at 5.6 percent.

While the types of emails sent can vary in success across sectors, high-performing programs still require a well-curated email mix. The overall composition of the types of emails retailers send makes a significant difference in how a program performs.

Cart abandonment emails across the board still see the highest conversion rate as well (1.7 percent), with price drop emails following with a conversion rate of 0.55 percent. Unlike click-to-conversion rate, which factors the initial email click into the equation, conversion rate identifies the total number of purchases made within five days of the email send time as a percentage of total sends.

The report recommends that retailers must blend these reactive emails together with proactive sends, like personalized batch emails, to create a mature marketing program that responds to the dynamic needs of the consumer.