An outdoor apparel brand founded three years ago by a couple of pals freshly graduated from Ohio’s Miami University is betting that the future of staying warm in the frigid elements lies not in goose down or its synthetic Primaloft equivalent—but in a NASA-inspired material known as aerogel.

It was on a classic, sophomore year backpacking-across-Europe jaunt that Michael Markesbery, co-founder and CEO of OROS Apparel, realized that heavy-duty outerwear for the outdoor wasn’t delivering the greatest wearing experience. Standing atop the highest peak in the Swiss Alps, Markesbery, clad in a hefty winter jacket, “felt like the Michelin Man.”

“Tons of layers, tons of bulk,” he said.

That got the self-described “science geek” thinking about how these traditionally dense, cumbersome jackets could retain their warmth with a sleeker, lightweight profile. But the pivotal moment came when Markesbery scored $10,000 from the Astronaut Scholarship Foundation, through which he learned about aerogel, an ultra-light, pale-blue material that NASA used to insulate space shuttles as well as the Mars rover.

“You’re telling me that you have this insulation that you’re using in the best torture test in the universe, space—which I knew is -455 degrees Fahrenheit—but it’s not being used in apparel?” Markesbery recounted. “What are we missing here?”

Turns out, what he and co-founder Rithvik Venna, now the COO, were missing is that aerogel isn’t exactly the most apparel-friendly product around, even though it has some commercial applications in beauty products, refrigeration equipment and building insulation, for example. The pair used that $10,000 seed money to partner with aerogel manufacturers, only to discover that “if you poke it, it shatters into a thousand little pieces,” Markesbery explained.

Instead of abandoning ship, Markesbery and Venna doubled down on their “passion project” from sophomore through senior year at Miami University: figuring out how to make the very brittle, very fragile aerogel into a form factor that was flexible and durable enough for incorporating into garments that wearers put through the paces in notoriously punishing climes.

Markesbery said they “blew through all the capital” they’d scraped together but ultimately alighted on a workable solution to their problem: aerogel particles that form an aerogel composite, now proprietary to OROS.

Dubbed SolarCore, the composite is one of the world’s first flexible, non-shedding aerogels that offers two important benefits relative to other apparel insulation materials on the market, Markesbery said. Tested against 250 other materials, from down to synthetics to closed-cell foam, using ASTM C518, which measures thermal conductivity, “I have yet to find something that actually beats it,” he explained, in terms of providing the greatest warmth.

But the real game changer, he continued, is what aerogel brings to the table on the question of loft. Down has been so consistently popular with outdoor gear makers because it traps air, which increases the insulation, and which in turn increases warmth—but also contributes to the inflated, Michelin Man look. The industry around winter weather gear has embraced the look to some degree, with a popular style of outerwear known as “puffer jackets.”

While that might work for an everyday run-around topper, the warmth required for the most extreme environs on the planet is on another level altogether. “SolarCore under compression at 15 psi maintains 97 percent of its thermal performance,” Markesbery explained. “What that means is for the first time ever, you can have a thin amount of insulation, put it into [an apparel] product and actually get significant thermal value.”

Translation: less bulk, more toasty warmth, and greater versatility for whatever cold-weather outdoor activity floats your boat. OROS’s flagship jacket, the Orion Parka, weathered Siberia’s frozen tundra in -40 degrees “going 60 miles per hour on a snowmobile with a T-shirt underneath,” Markesbery said. That slim profile and packability can be key considerations when customers in the top markets of San Francisco, New York City and Toronto have jet-set dreams of Lukla, the busy Nepalese airport servicing the Mount Everest Base Camp that also inspired the startup’s name before it rebranded a year post launch.

In addition to the SolarCore rubber foam insulation, the Orion features a mostly nylon shell, while the inner lining is made from recycled polyester—nodding to a sustainability mindset that Markesbery described not so much as an “unique selling point or value proposition” but simply a bottom-line standard in the outdoor industry.

“Our product team would kill me if we did anything otherwise, especially Jeff,” he added, referencing CTO and VP of product Jeff Nash, who previously headed up materials development for The North Face, led Black Diamond’s expansion into apparel, and was actively involved for many years with the Advisory Council of the Outdoor Industry Association Sustainable Working Group. 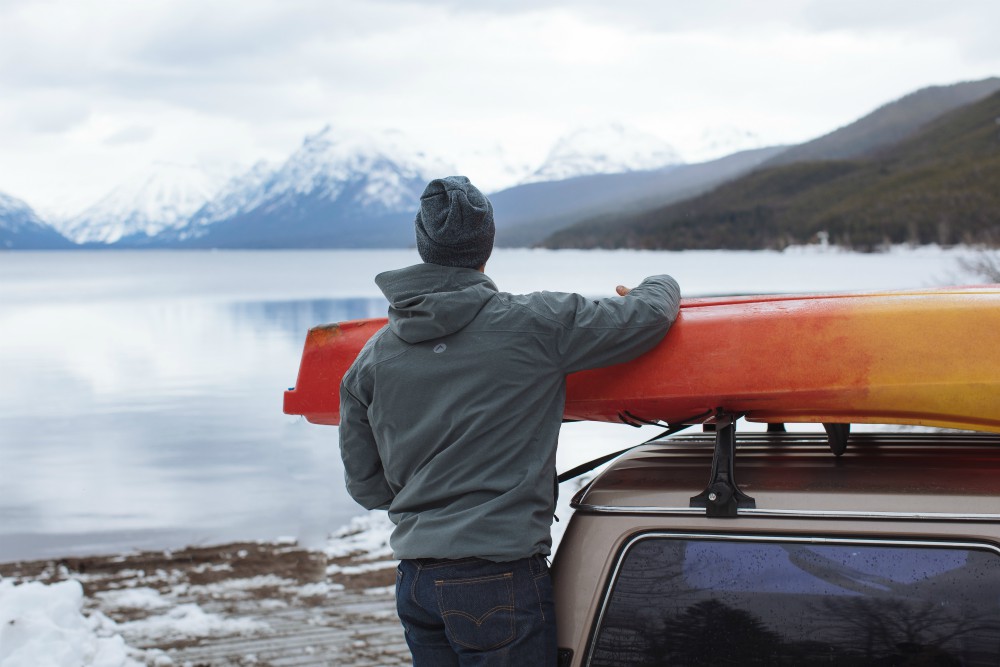 Very early on, Venna and Markesbery knew they’d need to tap into experienced experts to get their idea off the ground, building an advisory board sourced heavily from their alma mater. “What we didn’t know at the time when we graduated but we learned since is that the network from Miami University is incredibly strong,” Markesbery said, “and so the majority of our advisors, and even some of our investors are Miami alumni.”

On Thursday, OROS unveiled new branding, a refreshed website and its latest collection, which includes the newest iteration of the Orion parka. Weighing in at 3.1 pounds, the men’s parka is a full pound lighter than the previous generation of product and 2.5 times thinner than a comparably warm goose-down jacket, according to Markesbery.

Like most young brands, OROS has been growing 250 percent year-on-year since launch, powered in part by going deeper in its assortment rather than going wider, Markesbery explained.

“I think it’s really irresponsible to have rapid SKU proliferation,” he said, noting that OROS carries half the number of stock keeping units as competitors operating at a similar revenue level. “I don’t think you can just keep creating SKUs to acquire more customers.”

The thing is, outdoor apparel brands need to go the extra mile to keep customers coming back—because how many $350 jackets does one person need?

OROS has found success by focusing on sets or collections, promoting add-on items that enhance the big-ticket parka purchase. That means someone buying the Orion might also want a beanie or women’s leggings—which is now the second-bestseller by number of units, Markesbery added. Forty percent of OROS customers are women, though there’s no reason why the gender split can’t eventually reach an even 50/50, Markesbery said.

As OROS continues to find new customers and expand its reach, the brand’s advisory board is pondering the top question facing digital natives these days: when does leaping from clicks to bricks make sense?

Markesbery described the “tug-of-war” characterizing the board’s debate over bringing OROS into the real world. “The advisors who work with bigger apparel brands want to wait until we hit a higher revenue number,” he explained, “while the more entrepreneurial types are the most optimistic and see a lower revenue target as the threshold for exploring brick-and-mortar.”

The other question up in the air, he continued, is whether to secure wholesale partners or to open a flagship store—which would be a major step up from its humble beginnings as a Kickstarter campaign that tripled its stated goal of $100,000. “The consensus seems to be going with a flagship, which many other vertically integrated digitally native brands have done,” Markesbery said, though he’s quick to note that a physical store is still well more than a year away.

OROS, the Greek word for “mountain,” recently raised a $5 million funding round from backers including Sonny Vu, founder and former chief executive of Misfit Wearables, which Fossil Group acquired in 2015 for $260 million, former Goldman Sachs partner Eric Dobkin, aka “the Father of the Modern IPO”; NCT Ventures; and Listen Ventures.

The brand’s relentless focus on R&D is born from a need to rethink the limits of what consumer products can be, “not just tinkering to make things 5 percent better,” Markesbery explained.

“OROS is a brand that stands out from the pack and lives its mission—to create the most advanced outdoor apparel and technology, elevate experiences, and inspire people to rethink the realm of possibility,” Markesbery said.