For a brand built on classic Americana heritage, Ralph Lauren is in the throes of a decidedly modern makeover.

Gen Z fans of Zepeto, the freemium social app where users build digital clones for chat-room conversations and more, can now don Ralph Lauren’s digital duds and hang out in distinctly Manhattan spaces brimming with the brand’s “iconic spirit, energy and attitude.” Visitors to this “metaverse”—how people describe the virtual-reality environment where CGI avatars collide—can traverse the brand’s posh Madison Avenue flagship, traipse through Central Park or pop in for a caffeine fix at a Ralph’s Coffee truck, a haunt whose brick-and-mortar equivalent counts A Listers like Reese Witherspoon among its real-life patrons.

Ralph Lauren’s Zepeto partnership is the latest in a series of efforts to court an up-and-coming generation. The New York fashion empire began laying the groundwork in 2019, slapping Evrythng’s Digital Product Identities on virtually every item it produced. Doing so unlocked a “wealth of operational intelligence,” said Niall Murphy, CEO of the London tech startup, while readying the clothing maker’s incursion into Gen Z’s digital-first, sharing-economy reality.

A year ago, Ralph Lauren debuted digital clothing with Snapchat, allowing users of the Gen Z-favored social app to outfit their Bitmoji avatars in the label’s branded garb. “With Ralph Lauren’s respected reputation as a global leader within the luxury fashion space and Snap’s undeniable creative prowess and expansive reach to a younger consumer, we feel inspired to explore disruptive ways to tell our brand’s story, drive social commerce and engage with a new generation in an authentic and empowering way,” Alice Delahunt, chief digital officer for Ralph Lauren, said last August.

Just months ago, The Lauren Look, a monobrand rental offering, opened its digital doors to customers who prefer to borrow rather than buy womenswear staples like dresses, jumpsuits, jackets, tops, sweaters and pants from the Lauren Ralph Lauren brand.

Tying up with Zepeto underscores Ralph Lauren’s plans to court young cohorts, wherever they might be. According to Delahunt, the partnership “further demonstrates our belief that innovating in virtual worlds is essential to engaging the next generation of consumers.”

The brand, she added, “has always embraced new environments, and we’re excited to push the boundaries in this emerging arena. Making our product available to purchase and wear digitally and allowing consumers to experience the brand in immersive new ways is the next frontier.”

“I think the companies looking towards that [Gen Z] demographic as well as the future are definitely looking at this from a very long-term perspective,” Rudy Lee, chief strategy officer for the South Korean app with 200-million-plus global users, said in an April CNBC interview on the rising popularity of metaverse gaming apps. At the time, approximately 100 brands had worked with Zepeto at some point to put their goods in front of Gen Z’s eyeballs.

Zepeto fashionistas can now purchase 50 items making up 12 full Polo Ralph Lauren looks, marking the label’s “first entrance into virtual economies.” App users can pick from the brand’s preppy and polished or sporty summer styles, or opt for a throwback look with nostalgic vintage items, where logos and Ralph’s recognizable stripes feature prominently throughout. No Gen Z collection would be complete with a skateboard or two, which Ralph Lauren created “exclusively” for the collaboration. Items are priced according to the app’s Zem currency, where $1 will get you 14 Zems. Pieces set users back between 8 Zems and 40 Zems, or 57 cents to $2.86.

Ralph Lauren joins a litany of other fashion labels digitizing their iconic style for the tweens and 20somethings who frequent Zepeto. Christian Louboutin stepped into the app’s virtualized world last year, allowing users to preview spring 2021 men’s and women’s wear collections from the red-sole shoe maker in the brand’s so-called “Loubi World”—at a time when lockdowns illuminated the relevance of digital places and platforms. Gucci, a Gen Z favorite, also zoomed into Zepeto earlier this year, building on the app’s previous collabs with the likes of Disney and Nike. And Dior beauty digitized a curated nine-look makeup collection for the platform’s fan base last month.

Ralph Lauren will fete its latest digital fashion with another cultural phenomenon—K-Pop. Next month, Tomorrow x Together, or TxT—the five-member South Korean boy band that burst onto the scene in 2019—will interact with Zepeto avatars while kitted out into Polo Ralph Lauren’s digital looks in a virtual event hosted at the clothing brand’s Madison Avenue store. App users will have the chance to snap selfies with the pop stars and share their pics elsewhere on social.

The Zepeto partnership comes after Ralph Lauren announced a major esports investment in June, building on its legacy of supporting major sporting events including the Olympics and high-profile tennis and golf tournaments. Esports, which elevate video games into the professional realm, has become a favorite pastime with younger consumers and vaulted platforms like Twitch, the video game livestreaming site, into the mainstream. 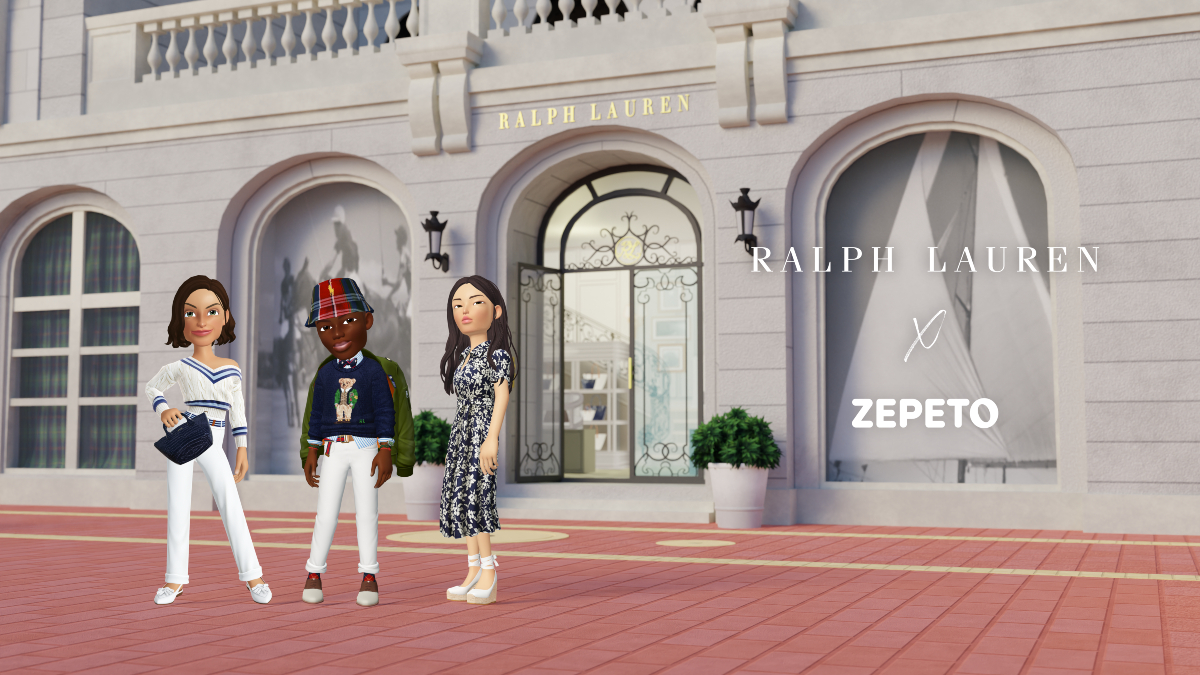 A raft of brands has courted the esports consumer, with Puma, Champion and Louis Vuitton among the labels experimenting in this burgeoning space.

Delahunt says the arrangement “will further the progress we are making to bring our powerful heritage brand to life in authentic ways across new platforms” while illustrating the company’s commitment to attracting “new consumers—including a generation of digital-natives who participate in gaming as a world-class sport and for entertainment.”

The duo teased plans to jointly launch “series of digital-first activations” on TikTok, Twitch and other platforms where digital natives gather. As part of the deal, Rekkles, a 24-year-old Swede and League of Legends G2 gamer worth nearly half a million dollars, starred in Ralph Lauren’s Wimbledon campaign.