Scan & Go may have flopped at Walmart stores—so much so that a January 2018 ramp-up was pulled entirely by May—but now the mobile app store experience is powering a new experimental small-format facility in Dallas dubbed Sam’s Club Now.

Shoppers at Sam’s Clubs have embraced self-checkout using Scan & Go, which now forms the bedrock for how customers will experience the just-minted Dallas location, described by CEO Jamie Iannone in a blog post as the “epicenter of innovation” for Sam’s Club as a whole.

Sam’s Club folded the Scan & Go app into its eponymous mobile download to give customers a well-thought-out experience that doesn’t rely on toggling between two separate windows. Shoppers open the app and point the scanner at a product’s barcode to shift it from their smart shopping list (more on that in a moment) to their mobile basket—similar to how Chinese consumers pay by scanning a QR code. By scanning items as they go along, shoppers can quickly check out via Walmart Pay or other stored payment options once they’ve completed the shopping trip.

But the company’s stab at rethinking retail doesn’t end there—and borrows heavily from much of what China’s been up to for the past few years. Put simply, Sam’s Club wants to make shopping at its centers simple for customers. While Scan & Go simplifies checkout, the chain offers smart shopping lists, powered by machine learning and history data, which guide customers to their desired products as efficiently as possible. No more wandering back and forth and wasting time searching for an elusive item—even if that was good for your step-counting fitness tracker.

It achieves this with wayfinding technology powered by augmented reality (AR), meaning a shopper simply has to look at his or her smartphone to see accurate, time-saving, turn-by-turn directions to the next destination. And it begins with a voice request, contributing to the seamless and human feeling of engaging with an otherwise pretty utilitarian store. 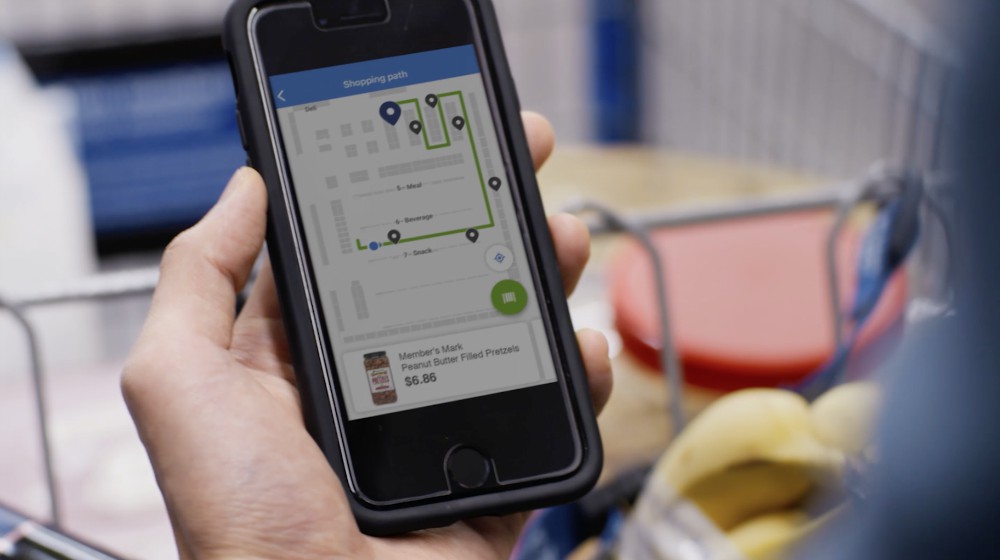 On a more light-hearted note, the company said it’s mulling plans to use AR to let shoppers picture their shopping carts as…pirate ships. Maybe because that would keep kids entertained and occupied? If this idea comes to fruition, Sam’s Club might consider seasonal and timely AR updates, e.g. swapping out the pirate ship for a reindeer-driven sleigh for December, winged Cupid in mid-February and so forth.

Inside the 32,000-square-foot Sam’s Club Now—75 percent smaller than the chain’s traditional warehouse—some shoppers might find the lack of cash registers and checkout lanes jarring. Though technology has a starring role in this experiential “technology lab that doubles as a live, retail club,” per Iannone, the 44 store associates remain a critical asset, especially the 11 “member hosts” who Sam’s Club described as concierge-like employees equipped with handhelds and apps to help expedite membership sign-ups and facilitate returns. The company noted that one moveable checkout station will be on hand for any outlier instances, though “the expectation is that it is rarely used,” a spokesperson said. Customers also can opt for one-hour pickup, all facilitated by the mobile app.

Sam’s Club’s decision to locate the Now store in Dallas’ “really cool” Lower Greenville neighborhood demonstrates considerable savvy about its current—and, its hoped, future—customers. The company wants to attract “early adopters” whose feedback will be instrumental with co-creating future tech and experiences, the spokesperson explained.

Scan & Go’s disparate fates in Walmart stores versus Sam’s Clubs boils down to a tale of two use cases—and “friction” that wasn’t quite anticipated. The app made shopping for Sam’s Club’s bulk items faster and easier but made checking out weighed items, like fresh produce, cumbersome and unwieldy in Walmart big boxes.

“The goal of a convenience-like Mobile Express Scan & Go is to reduce friction points for the customer during the checkout process,” the spokesperson said, adding that the app “added friction points that the Walmart customer simply wasn’t ready to adopt.”