I’m feeling pretty dumb these days. Help me out.

Here’s my quandary: U.S. apparel import prices are falling, and precipitously from some major suppliers, while the prices paid by consumers for clothing are rising. You may ask, so what? But I wonder if there’s more to the story. Let’s take a look.

I’m not surprised to see that prices paid for clothing by consumers in the United States have moved up this year. No wonder when I consider all of the press about knotted supply chains, labor shortages, Covid lockdowns, and a lack of shipping and trucking capacity. In fact, consumer apparel prices are up at a rate of 4.2 percent for the 12-months ending August, according to the Bureau of Labor Statistics. Put another way, it’s a sign of inflation.

And as we all know, most clothing sold in the U.S. is imported. So, I looked at the latest import statistics published by the Commerce Department’s Office of Textiles and Apparel (OTEXA) and did a little number-crunching sleuthing. Here’s what I found: based on OTEXA data, import prices for apparel have moved in the opposite direction from consumer prices —falling 9.3 percent for the 12-months ending July compared to the same period in 2020. That’s for apparel imports from the world in total.

Does that make sense? Maybe it has something to do with folks diversifying their sourcing out of China, compelling Chinese manufacturers to slash their prices to maintain customers. Wow, and did they ever slash prices: apparel import prices from China are down 17.3 percent for the 12-months ending July. Also, Chinese exporters are saddled with Trump-era tariffs of 7.5 percent on average on top of regular tariffs, which further adds to my puzzlement.

While imports have slowed since the heady days prior to Covid, China remains the largest supplier of apparel to the U.S. In fact, China continues to dominate the U.S. apparel market by holding nearly 37 percent of total U.S. imports in this sector for the 12-months ending in July. Which begs the question: what about everyone else? Well, apparel prices from the rest of the world are down by 6.8 percent for the same 12-months ending July. 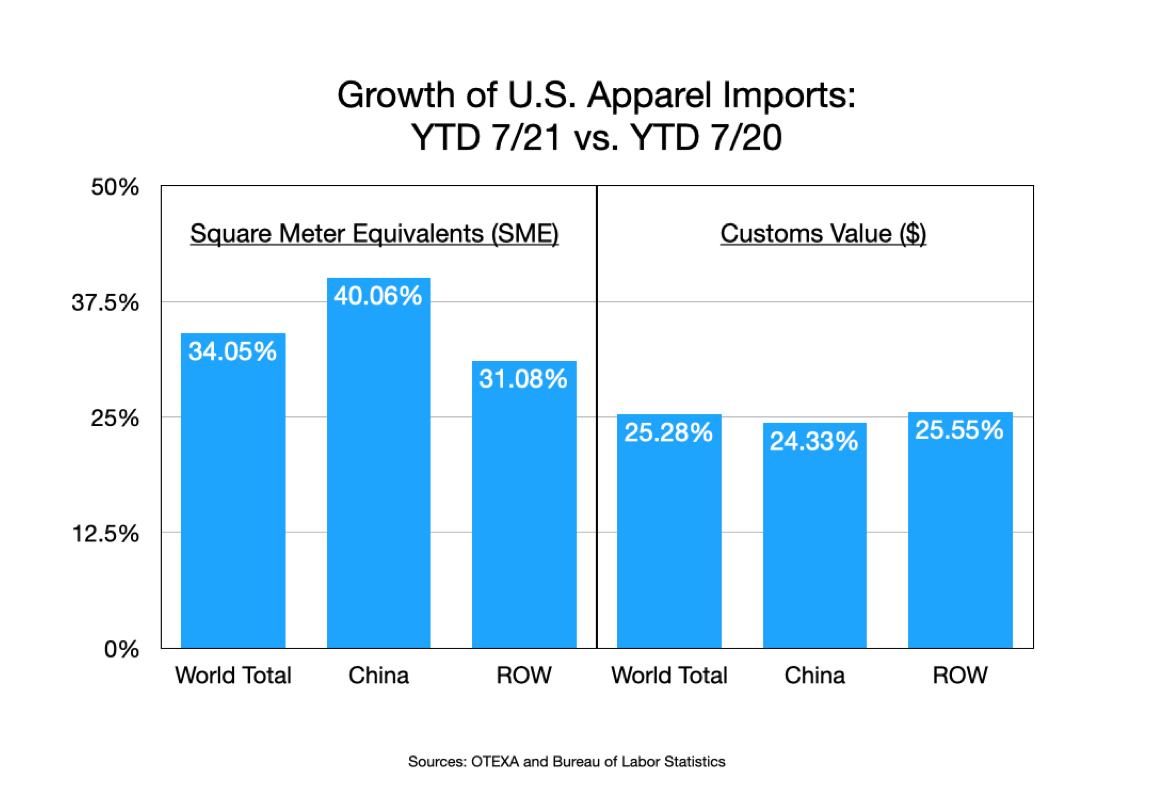 I’ve heard economists in the past say to treat links between import prices and consumer prices with some care. This is because there’s some uncertainty baked into any correlation between the two. I agree one needs to be careful when comparing different data series. The collection, timing or compilation of such data may be predicated on a different set of assumptions.

Maybe the dollar exchange rate has a role to play?

Even so, I wondered if a strong U.S. dollar has contributed to the decline in import prices. Indeed, foreign contracts are often priced in the local currencies where clothing is made. A stronger dollar, in this case, will result in lower prices for imported apparel when measured in dollars. Although the U.S. dollar has strengthened against foreign currencies in recent months, it’s still lower than a year ago. So, more puzzlement on my part.

What also puzzles me are rising raw material costs. Fiber prices are up. Cotton continues to advance past $1 per pound levels, and polyester, as is normal to expect, tracks cotton higher at the same time. 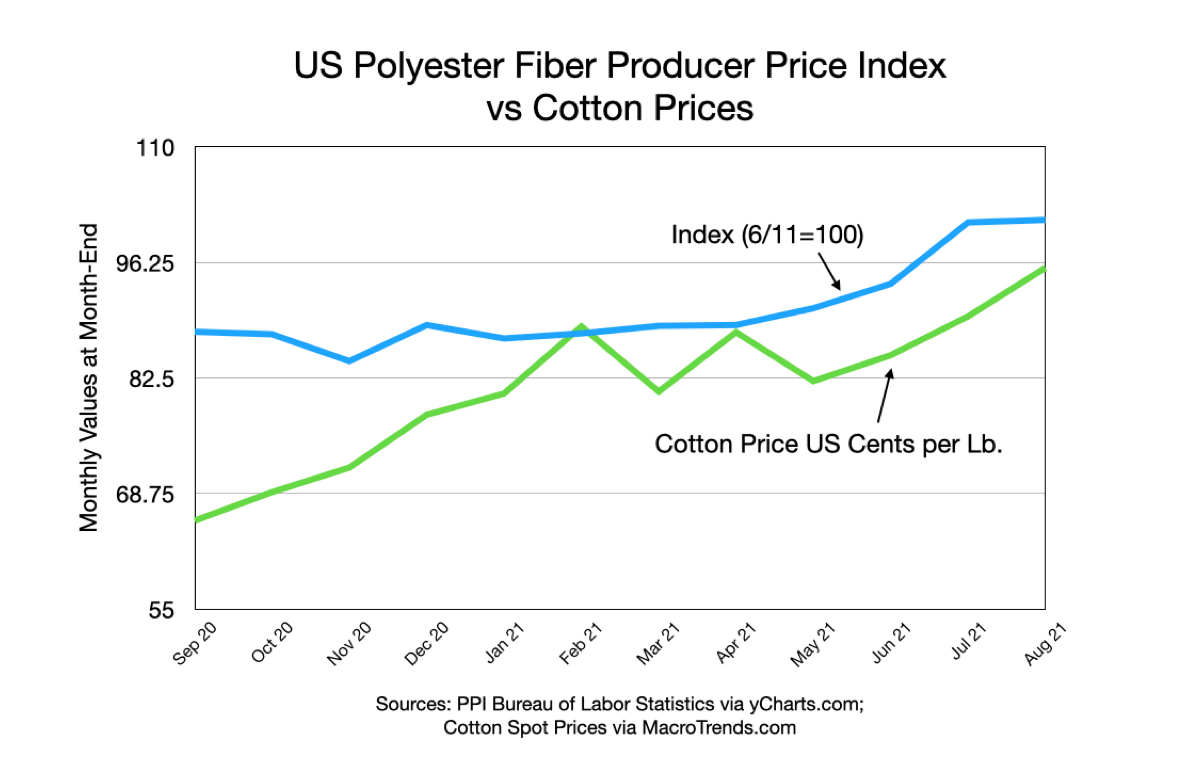 What about higher shipping costs?

I’ve also heard a lot about rising shipping costs. Of course, there are many reasons for the rise in these costs ranging from a lack of port workers to extraordinary demand. The result? There’s not enough shipping capacity to meet demand. Hence, higher prices. According to a recent Wall Street Journal article, “The average price world-wide to ship a 40-foot container has more than quadrupled from a year ago, to $8,399 as of July 1, according to a global pricing index by London-based Drewry Shipping Consultants Ltd. The measure has surged 53.5 percent since the first week of May. Listed prices to ship from China to major ports in Europe and the U.S. West Coast are closer to $12,000 a container, by Drewry’s measure, and some companies say they are being charged $20,000 for last-minute agreements to get goods onto outbound vessels.”

A missing piece to the puzzle?

So, what am I missing? There must be some logical explanation for this. Then it occurred to me. This may sound wonky, but it is relevant: the import data I discussed above are for “general imports” meaning the declared value of goods excluding insurance, tariffs and freight. But maybe we’d see steep unit price increases if we include the value of general imports and insurance, tariffs and freight. Only that we don’t. Unit prices are still down. 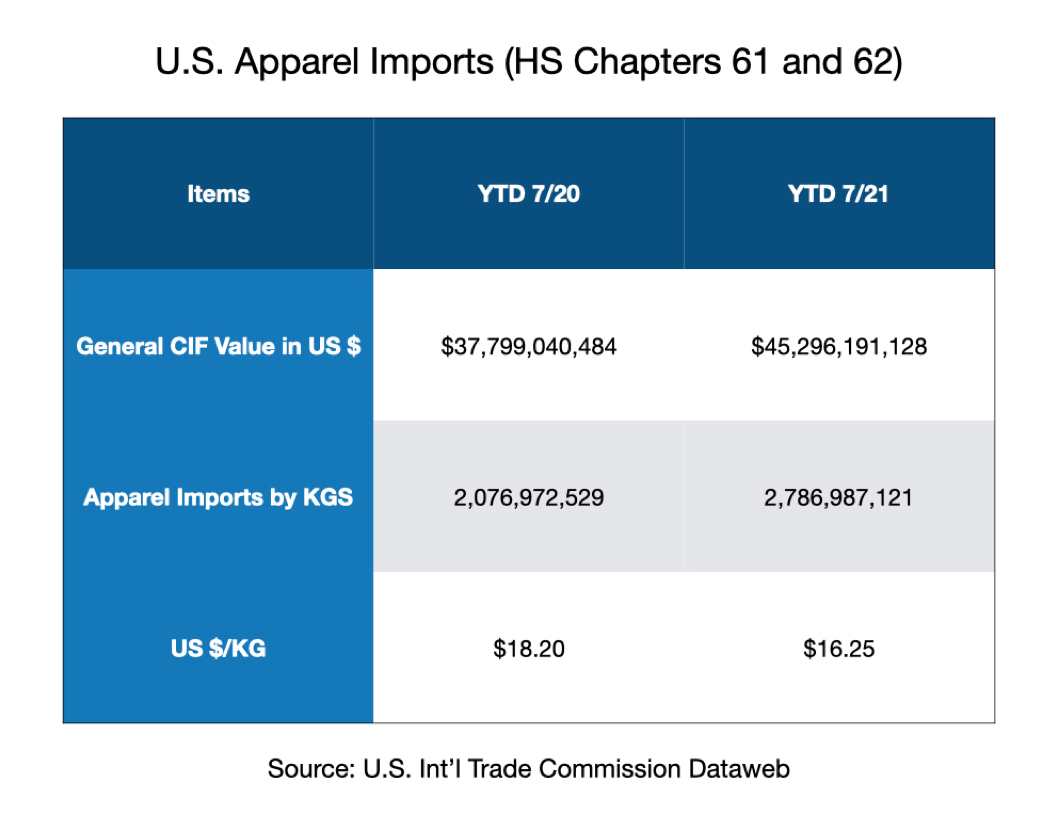 So, I’m stumped. Either there are lots of subsidies floating around the world, or companies somewhere in the supply chain are collecting the profits. So, someone, somewhere, is filling the gap or actually grabbing a profit. It’s too easy (and unfair) to simply blame greedy brands and retailers. After all, they’re having trouble getting their products into the country in the first place. So, something else must be going on.

What about foreign manufacturers? Perhaps suppliers are sharing in the higher costs of shipping, etc.? Or maybe government subsidies have helped companies better compete in a hyper-competitive market? I’m not so sure. After all, prices in the consumer market are rising, not falling. Or maybe it’s the effect of private label sourcing of direct-to-consumer products? In theory, such items would cost less than products sold in stores via traditional supply chains. But even these products would be affected by the higher costs of shipping.

Robert Antoshak has more than 30 years of experience in the fiber and textile industries. He has held executive positions with the Fiber Economics Bureau as editor of the Fiber Organon, American Fiber Manufacturers Association as director of international trade, American Textile Manufacturers as associate director of international trade, Trade Resources Inc. as president, Werner International as vice president, INTL-FCStone LLC as managing director of Fibers & Textiles, and, most recently as managing director of Olah Inc. Antoshak is a founding member of Vidalia Mills in Louisiana and is senior adviser.