It’s time for a reality check.

There’s a lot of hype about the economy, politics, the pandemic, and the war. When so many factors are stuffed into the information recipe, the ensuing mix becomes difficult to stomach. So, what is that stuff anyway? Yuck. Let’s see if we can identify the key ingredients and figure out if a digestible recipe has been created—or not.

We begin with politics. Heartburn. Both political parties in the United States have latched onto the issue of inflation. Republicans claim it’s the fault of poor Biden administration policies, while Democrats argue it’s simply a byproduct of the pandemic and the war. Sandwiched in the middle are economists, with their numbers and analysis used by both sides to bolster their cases.

But relying on economists can be a hit or miss proposition. Queasiness. Indeed, the economics profession has a credibility problem that’s often difficult to overcome. After all, as the saying goes, “economists have predicted nine of the last five recessions,” a funny though insightful observation made by the late Paul Samuelson, the first American to win the Nobel Prize in Economic Sciences.

Moreover, with our national discourse so polarized these days, it’s not surprising to see economists struggling to determine the best course of action when dealing with inflation.

For instance, should the Federal Reserve raise interest rates to control rising prices, and if so, by how much? Is inflation really that bad for the economy? After all, it is a consequence of a tight labor market and higher wages. Is that bad? But in the long run, doesn’t inflation erode the well-being of an economy and hollow out a country’s productivity and fiscal vitality?

It’s hard to predict the future. Does anyone have some antacid? But the economic soothsayers are always to blame when forecasts don’t sync up with the future. And then there are the politicians. They have their own agenda regardless of the facts from which forecasts about the future might be based.

Here's How Holiday Revenue Shaped Up for Burberry, Boohoo and Matalan

Indeed, the root cause of inflation is multifaceted. But unfortunately, some commentators have focused on particular factors just for scoring political points instead of genuinely attempting to understand how we got here and what to do about the fundamental problem.

Beyond the political hyperbole, what do we know about inflation, and how does it directly impact our industry? The Bureau of Labor Statistics just released its March Consumer Price Index (CPI), which measures inflation in the economy. Guess what? Overall inflation, on an annualized basis, jumped to 8.5 percent in March, the highest rate since 1981. This isn’t surprising as the full impact of the Russian invasion of Ukraine wasn’t included until last month and the war didn’t begin until late February.

Essential commodities jumped, led by oil and petrochemicals, followed by many agricultural and food products. But most interestingly, apparel retail inflation rose to annualized rate of 6.8 percent, which compared to an annualized rate of negative 2.5 percent in March 2021.  Seems like retailers can’t catch a break. First, we had pandemic-induced inflation and snarled supply chains, and now we have the effects of the war adding to the cost of everything, including clothing.

With the world appearing upside down, how do consumers feel about their prospects? After all, many have benefited from government stimulus checks, while their wages have gone up (+5.5 percent, according to the Bureau of Labor Statistics).

Despite more bucks, consumers don’t feel like Buck Rogers when it comes to their feelings about the world these days: consumer sentiment is down a whopping 37.8 percent since last year, according to the University of Michigan Consumer Sentiment Survey. The decline of consumer sentiment is a reaction in part to higher inflation, but it’s also not a good sign for future demand.

Here’s an “Inflation Scorecard” of key measures of forces creating upward (or downward) pressure on prices as of April 12, with particular focus on apparel/retail: 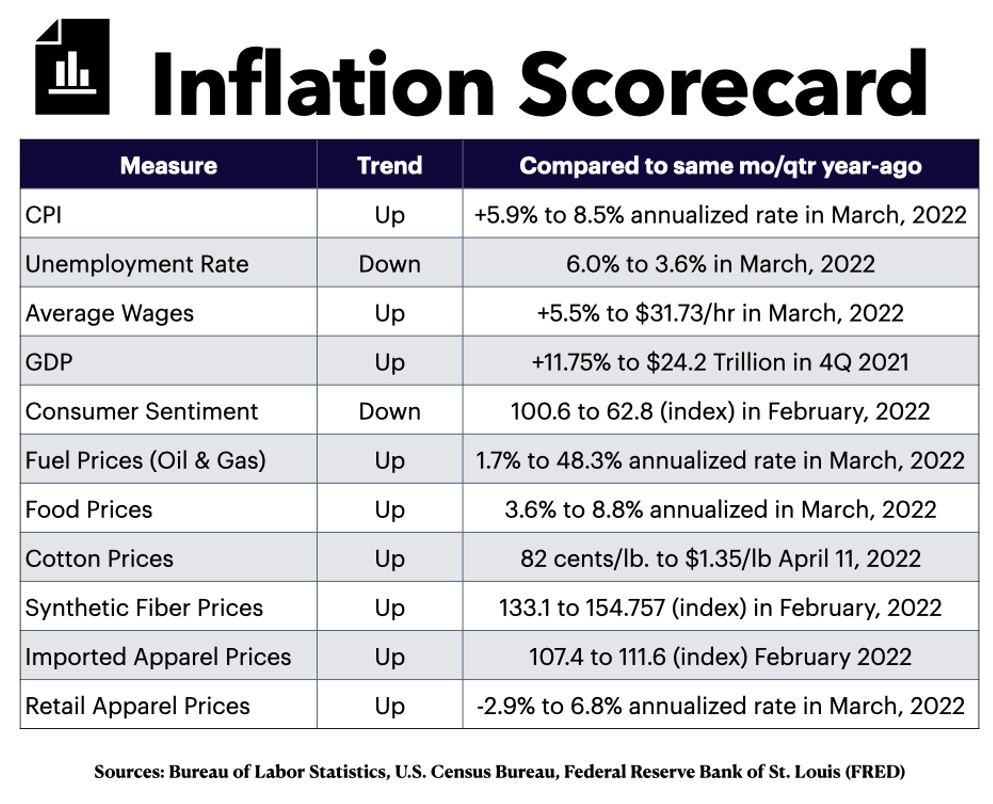 All eleven measures compiled in the Inflation Scorecard point toward higher prices, greater inflation, along with some worrisome trends about the future health of the economy. Why? Simply put, demand is outpacing supply for many basic commodities, which has put a damper on consumer sentiment, a leading indicator of consumer purchasing behavior.

There are some other factors to consider. For example, President Biden released a record amount of oil from the country’s strategic reserve (about 30 percent of the reserve) to bring down the price of gasoline at the pump. Some cynically see that as a political move: it’ll take months for the oil to be distributed throughout the supply chain.

Coincidentally, the full effect of tapping the strategic oil reserve will only become apparent just before the mid-term elections in November. Hmmm. However, others cheer the effort, as they point to early price declines in the oil markets even before the strategic reserve announcement was made by the White House.

And here’s an item for followers of cotton prices. According to USDA, cotton plantings are forecast to be virtually the same this season as last (down less than 1 percent). So, guess what? Prices have rebounded and are following other commodities higher.

For mills that missed the dip earlier this year, get used to higher cotton prices. Is this a function of the war? Perhaps, but it could also be a function of a drought in Texas, and higher prices commanded by other crops which can encourage farmers to switch from planting cotton (assuming they haven’t planted cotton already). Time will tell.

For our industry, it’s essential we take a deep breath, step back, and consider all the factors bombarding us daily. This includes problems on the shop floor, delivery and distribution knots, and blaring media headlines that seem to portend the end of humanity as we’ve known it. Sheesh. Give me a break.

Guess what? Economics is a funny business. And predicting human behavior is downright hilarious. We may have higher prices at the pump, but people are driving at pre-pandemic levels, higher costs or not. Even some state governments have temporarily lifted their gas taxes, subsidizing American drivers.

So, here’s some reality: folks just choose to pay the higher gas prices—despite the doom and gloom portrayed in headlines. In many cases, they really don’t have any choice.

What’s more, the cost of shipping has dropped in recent weeks. Why? Perhaps pandemic bottlenecks are easing. Good news for importers. Of course, this decline may be due to easing demand due to some realignment of sourcing from countries in different parts of the world. However, the value of global trade has dropped since the outbreak of hostilities in Ukraine with retrenchment witnessed by the European Union.

And there’s another critical factor to consider: people are still buying. Despite inflation, people are still buying clothing. According to the latest apparel retail sales numbers collected by the U.S. Census Bureau, consumers bought 17.3 percent more clothing in February 2022 compared to February 2021. It appears the bite of inflation has yet to dampen consumers’ appetite.

But make no mistake, if left unchecked, inflation will flatten demand. Consequently, it’s sensible for the Federal Reserve to be proactive in managing inflation.

Will the Federal Reserve overshoot the mark? If it does, then we’re in a recession. That would be ironic. We still may have a war raging in Europe along with a pandemic. Trillions of dollars were spent to avoid a recession. Only to be undone by what’s unknowable? It’s a terrifying thought.

On the other hand, if the Federal Reserve gets it right, we’ll have the proverbial “soft landing.” Then, of course, we still could have the previously mentioned disorders to contend with, but with one exception: inflation would have been tamed while not harming growth, wages or jobs. A Goldilocks moment. Stores remain open. Sales are buoyant. Let’s hope.

So how did the concoction made from the economic recipe end up tasting? All I’ll say is, the antacid helped.