In 2018, U.S. apparel imports were $86 billion (FOB value), growing at a staggering 9.8 percent compound annual growth rate (CAGR) since 2010. A breakdown of U.S. apparel imports shows the top eight countries have a combined market share of 74.2 percent, headed by China. Vietnam and Bangladesh have already been drawing the attention of many apparel brands looking for alternatives to China, as have other more non-traditional ready-to-wear apparel countries, like India.

The growing trade war between the world’s two largest economies, the U.S. and China, is creating ripples across all sectors, including apparel and textiles. Since early 2018, the U.S. has imposed multiple tranches of trade tariffs on lists of goods imported from China, with the most recent tranche spreading to cover textile and apparel goods.

According to a recent study using GTAP data (Global Trade Analysis project, Purdue university), between $3 billion to $8.8 billion worth of apparel exports could potentially be sourced from three key countries: Bangladesh, Vietnam and India.

This view on country locations is supported by apparel executives indicating that Bangladesh, Vietnam and India will be the top three sourcing destinations for the coming five years. 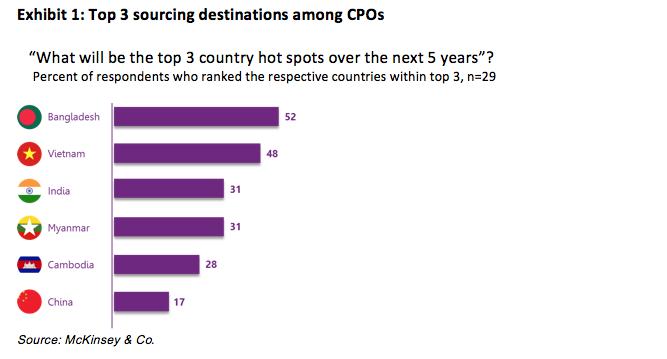 Moving out of China requires a plan

The apparel sourcing paradigm is known for its ongoing shift to low wage countries, making products until a cheaper option becomes available, then moving sourcing to the new location. In the 1990s, Sri Lanka, Taiwan and Korea were hot spots, with the 2000s seeing a further move to China, Bangladesh and starting in South East Asia. The 2010’s have seen a growth across the Asian subcontinent, South East Asia and the start of manufacturing in Africa. For the current shift, it is important to understand what apparel manufacturers are looking for before moving production out of China.

A recent survey conducted by Weave amongst leading apparel brands and sourcing offices based in Hong Kong, indicates that access to raw materials and lead times are the biggest concerns for moving volume out of China. 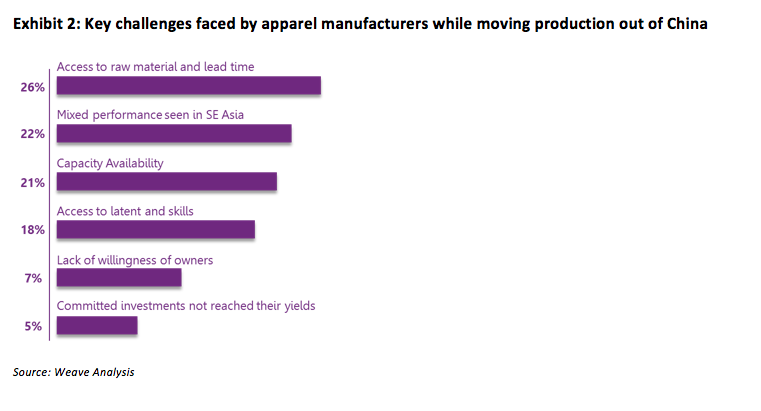 Looking toward opportunity in India 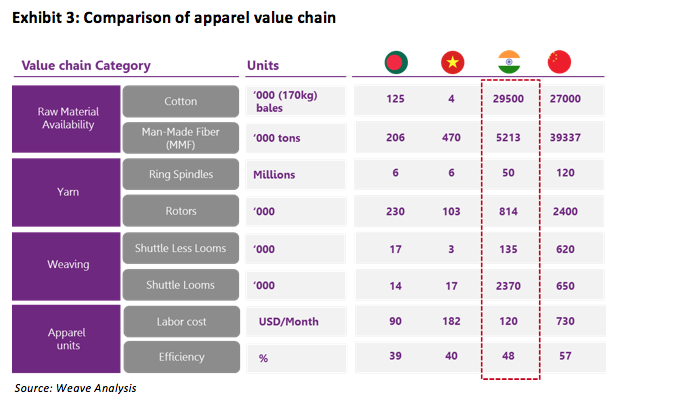 India has a significant edge over other sourcing countries, especially Bangladesh and Vietnam, in terms of raw material availability. India is the largest producer of cotton and second largest producer of Man Made Fibers. Indian apparel producers source raw materials domestically, leading to significant opportunities to reduce lead time, which is a competitive advantage for China. Outside of China, India has the largest yarn spinning and textile weaving capacity among apparel exporting nations.

India loses ground on labor cost competitiveness to low cost countries, despite a high labor efficiency, due to the way in which low price FOB is the key factor in winning large volume, low value-add export orders.

With the escalation of the U.S.-China trade war, nations importing raw materials (yarn, filament and fabric) from China have high risk of exposure to future rounds of U.S. taxes as the ‘yarn forward rule of origin’ would be applicable under current tax definitions. If this occurs, manufacturers in Vietnam and Bangladesh could experience increases in raw material costs, which could offset their advantage in supplying low cost labor.

In addition, after the U.S. withdrawal from TPP in 2017, countries like Vietnam lost the advantage of having 0 percent import tax to U.S. market. This can further reduce its attractiveness as all sourcing countries are at level playing field in terms of import duties.

India requires internal reflection if it wants to grow

In spite of the fact that India has advantages in cotton and labor supplies, its share of the global clothing export market was a meagre 4 percent in 2016, compared with China’s 36.4 percent, Bangladesh’s 6.4 percent and Vietnam’s 5.5 percent. India’s ability to attract more apparel export orders can be attributed to three key reasons: poor infrastructure, high lending rates and archaic tax laws.

Apparel producing units in India face acute power issues (in terms of availability and price) and high logistics costs (both inland and sea). Use of secondary power sources, such as diesel generators, makes the business unviable and unsustainable on the local environment. As a result, most apparel makers adopt outsourcing and overtime to ensure on-time delivery. This practice has been seen to lead to quality issues and impacts the ability for facilities to scale up.

Lack of cheaper institutional credit has restricted Indian factories from growing and expanding. As a result, many Indian factories remain small to mid-sized, resulting in a highly fragmented sector. To compensate for high credit, Indian government supports small and medium size producers by offering a slew of benefits ranging from tax rebates, to partial exemptions of labor laws on things like layoffs and overtime. This has kept production concentrated at small factories that lack the economies of scale and the ability to fulfill large orders, which is sought after by large brands.

Natural fibers like cotton and wool constitute only 30 percent of global fabric consumption. The key battle in apparel is played now in man-made fibers (MMF). India’s share of global MMF production is only 7 percent, while China is the dominant player with 66 percent share. MMF imports to India are taxed at 15 percent to 25 percent, increasing the input costs and limiting Indian manufacturers from producing a wide range of synthetic garments. In addition, domestic MMF suppliers (who are predominately large chemical companies) sell MMF’s at high prices due to limited competition and lack of regulation.

India can address these challenges

To overcome the challenges hindering apparel exports, India is required to take concrete steps in the areas of policy design, fund availability and labor reforms. The current Indian government has taken a pro-growth stance, and has initiated several reforms to support the sector.

These changes are required to ensure that India has fundamentals in place to secure the drive. The success of these initiatives driven by the government will start to be reflected in the 2019 financial year exports for India after a period of stagnation and sourcing shifts.

The road to growth

India has advantages in terms of raw material and competitive labor costs compared to other potential sourcing countries. The country has not been able to showcase its inherent strength due to infrastructure issues and policy paralysis, resulting in muted export growth over the past 10 years. With China embroiled in a trade war with the U.S., many sourcing nations have an increased risk of tariff on their final product as they import most of their raw material from China. In such a situation, buyers are now exploring sourcing countries that have easy access to raw material and a competitive labor cost.

India fits this requirement, provided it can address the existing bottlenecks.

Recent policies and tax benefits are steps in the right direction. India has a unique chance to be a leading player in the future of the apparel industry, but it requires successful implementation and execution of the new policies at all levels, to reach the smaller regions of their apparel ecosystem. With the right support, Indian apparel manufacturers can break the status quo and pursue high ambitions.

As the world is looking for new and clever ways of optimizing the global supply chain and trade, India and other players will be under scrutiny and consideration more than ever before. Weave Services Limited’s annual industry leading Supply Chain conference, Weave 360, will be hosting a panel on “Global Trade & Manufacturing Trends” on Aug. 22 in Mills Fabrica, Hong Kong. With this year’s theme “Unlocking your retail value chain,” the conference will take the audience on a journey from manufacturing to consumer—hitting all supply chain nodes along the way—with input from industry thought leaders and practitioners. Join Weave in this journey at https://www.weaveconference.com/

Weave Services Limited is a supply chain consulting firm that specializes in demand and production planning based in Hong Kong working with global manufacturers, retailers, brands and sourcing organizations. Our advisory services drive lasting transformation through process re-engineering and change management, guide retailers into the new frontier of big data through our replenishment and analytics outsourcing services, while our certified APICS trainers build supply chain capabilities with your teams.