The pandemic propelled trade shows into digital formats out of necessity, and intimate apparel event Curve was no exception.

Event organizer Comexposium held its first fully virtual Curve Connect show last September, and drew participation from more than 1,000 buyers. According to Curve’s visitor promotion director Kirsten Griffin, at the time, the intimates industry was still somewhat apprehensive about online events since the category relies heavily on being able to touch and feel products. Now a year into the pandemic, both brands and retailers have had to adapt to selling and operating online, making them more open to participate in a digital show.

“Now these buyers have understood that they can do business online and it is possible to go to a digital show and have a really great experience,” Griffin told Sourcing Journal.

Thanks to this greater industry openness to a digital format, Curve Connect is expecting a larger audience for its second edition, which kicked off Tuesday and runs through Feb. 22. The weeklong show will feature panels, roundtables and events, including sessions on trends, reaching the Gen Z buyer, sustainability, social media marketing and growing profits. With this show, Curve is introducing new badge tiers and subscriptions, including an option that gives limited access to webinar content.

Besides gathering a greater number of buyers, the event is expected to attract a more international crowd than usual. Curve has teamed up with Comexposium’s French intimates show Salon International de la Lingerie to jointly host Curve Connect. Curve’s physical shows attract about 8 percent their audience from outside the United States, with most international visitors hailing from Canada. In comparison, Curve Connect has more than 20 percent of visitors joining from international locations.

Along with drawing more global attendees, the show’s European partnership has also increased international exhibitors. More than 120 of the showcasing brands hail from outside the United States, including labels like Marie Jo, Aubade, Simone Perele, Chantelle and Wacoal. Curve Connect has also gained a greater number of smaller labels following its virtual Curve Pitch Off competition held in November, during which brands presented their designs to a jury.

Bluezone Invites the Industry to Discover What's Next in Denim

To help buyers discover new brands, Curve is using Grip software to power AI matchmaking. After visitors build out their profile, Grip will find the brands that fit their needs. Besides being able to browse collections, the platform lets attendees schedule a video appointment to have face to face with potential customers or vendors. 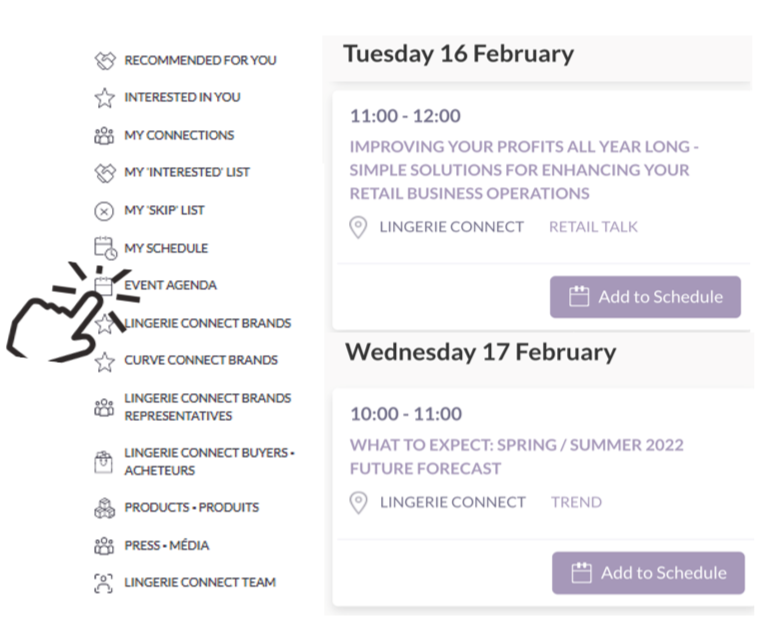 Show exhibitors are featuring designs for spring/summer 2021, which are available for immediate delivery, and previews of their fall/winter 2021 lines.

While the overall apparel category took a hit during Covid, innerwear has been a bright spot as consumers sought comfort in loungewear and ramped up healthy lifestyles in activewear. With gyms reopening and consumers having more time to exercise, Griffin expects activewear to remain strong. Meanwhile, she says one of the trends at the show is a move away from loungewear toward “sexy” intimates, driven by consumers wanting to get dressed up.

“They’re at home now and they want a wonderful date night, or they just want to feel sexy and pretty again,” she said. “So by putting on a gorgeous bra, they can get that affirmation that makes them feel good.”

With the potential return of event dressing this year, Griffin also sees space for shapewear to pick up.

Curve plans to return to a physical show format later this year in August. But even as the show eyes resumed in-person events, Curve still sees a place for digital interaction as part of the trade show experience. Having a digital platform enables buyers to pre-shop collections and exhibitors to make connections early, allowing both sides to make the most of their time during the live event.

The Curve Connect platform will be up for the rest of the year, enabling companies to do business on their time. “[Trade show producers] are a connector, and that’s not just during the trade events,” said Griffin. “It’s all year long.”