Rather than highlighting the industry’s biggest and best-known brands, last week’s Outdoor Retailer trade show in Denver served as a meetup for startups and DTCs. With many big-name brands largely absent, smaller labels took advantage of the opportunity to introduce their products, bringing a new energy to the annual event.

Sourcing Journal spoke with a number of these newcomers—many of whom were first-timers at the OR show.

Casual, performance-infused staples are the name of the game for Salt Lake City, Utah-based Coalatree, which produces apparel, hiking and camping gear for men and women. According to a brand spokesperson, most of the label’s pieces are designed with multiple use cases in mind. (A blanket can be transformed into a poncho and then folded into a pillow, for example.)

Meanwhile, some of Coalatree’s products leverage innovative material technologies. Items including a unisex fleece pullover are made with coffee ground-infused recycled polyester, which imbues the garment with odor-control properties. A four-way stretch performance denim is available across pant styles, allowing hikers to transition from trail to happy hour. Prints and slim-cut silhouettes round out the line.

“We try to look at trends and employ them for the outdoors,” the spokesperson said. “You have to look at high fashion in order to transition it to the mainstream.” 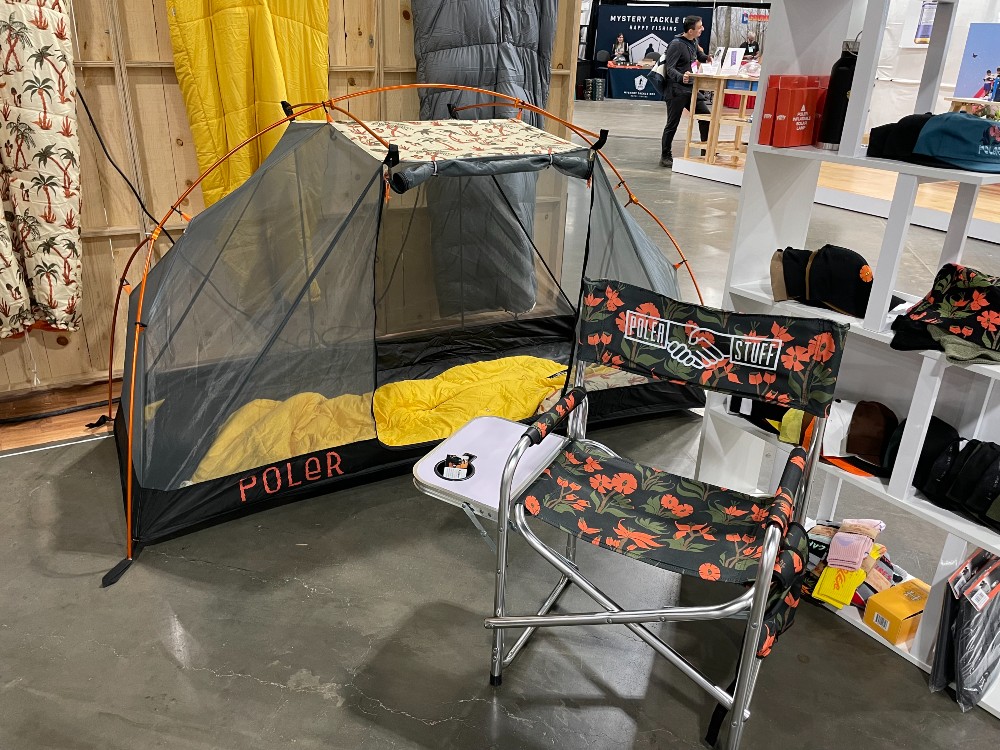 “We were really developed around the fundamentals of action sports and just enjoying nature,” Nate Duffy, marketing manager for Portland, Ore.-based Poler told Sourcing Journal. But unlike the industry’s foremost leaders, which tout technical features and espouse a rugged sensibility, the brand seeks to be an approachable option for outdoor enthusiasts who just want to have a good time. “Poler came in to fill that void,” Duffy said. “I pitch it as ‘Everybody’s camping company.’”

Poler’s products merge function and fun, including a wearable sleeping bag dubbed the Reversible Napsack. The piece can be cinched, via a drawstring around the waist, to allow its wearer to walk freely around a campsite while keeping warm. Ponchos, camping bags, tents and ready-to-wear garments like pants and hoodies are also popular brand staples, available in psychedelic prints for spring, Duffy said.

“Coming out of the pandemic, we’re seeing how many people are branching out into the outdoors for the first time or even rekindling that fire,” he added, noting that consumers are looking for products that are “functional, timeless and affordable, and just meant to amplify the fun of being outside.”

The decade-old brand, which sells primarily through its own e-commerce store as well as outdoor cooperative REI, has taken some time away from the OR show. But Poler decided that 2021’s summer market was the right time to attend given shifts in consumer appetites. “Coming out of a crazy twisted year, it was time for us to get back and shake some hands and bump some elbows,” Duffy said. “With the pandemic, getting out has never been so important” to consumers, and the brand was banking on retailers feeling the same way.

Oregon-based startup Got-Bag made its foray into the outdoor market in 2016, debuting at OR for the first time last week. The Bluesign-approved line of backpacks, totes and overnight bags uses recycled ocean plastics collected from the Indonesian beaches of Java, brand development manager Case Davis said.

“We have our own ocean cleanup in Java working with a community of 2,000 fishermen,” he said. “On a daily basis they pull out garbage from the ocean in their nets, and they normally burn it or throw it away. We compensate them and take it off their hands to make backpacks.”

The plastic waste is chipped, pelletized and extruded into yarns in Indonesia, then shipped to the company’s manufacturer in China to be made into durable, outdoor-ready bags. Key styles include a rolltop pack that can be expanded to fit a few days’ worth of gear, a daily-use backpack and a large weekender duffle. Got-Bag has also expanded into children’s bags, which showcase the same designs and muted pastel color ways.

“We have been primarily direct to consumer, but we’re here to build the retail base,” Davis said. “Just because it is a smaller show, people have been giving more time to people like us, having more intimate conversations. With a brand mission like ours, telling the story is crucial.”

Newly launched athletic apparel brand Hemp Black spent months building out its proprietary material—a recycled polyester fiber and infused with CBD—before launching during the early days of the pandemic. According to brand rep Sam Faught, the North Carolina-based company saw the athleisure boom of the past year as the perfect opportunity to launch a product made from two of the consumer goods space’s hottest materials: recycled plastic and CBD.

According to Faught, CBD has antimicrobial and odor-fighting abilities that make it an intriguing addition to athletic apparel. The company also uses copper-infused thread in a number of its products, adding to the antibacterial appeal. Women’s and men’s apparel from 3D-knitted leggings and bra tops to workout shorts and T-shirts are all made with the recycled polyester fiber, and the goods can be white-labeled for retailers interested in creating their own in-house lines.

“This is our initial offering to the retail stores—we’re going after the smaller independent outdoor and athletic retailers,” Faught said. The line is also supplemented by CBD products like sublinguals, gummies and topical treatments that offer anti-inflammatory benefits and stress relief.

“This is our first market and it has been absolutely fantastic,” Faught said. “Covid has brought everybody outdoors and the demand for active wear is the biggest it’s ever been.”

Mexico-based outdoor apparel label Santero debuted for the first time in the U.S. at this summer’s OR show, according to brand rep Bertha Duek. The line of performance base layers and outerwear was created in partnership with Polartec, she said, using the material maker’s most advanced innovations. Performance fleece, Power Air insulating technology and thermo-regulating knits made appearances throughout the line.

While the range was designed for performance, Santero differentiates itself from its tech-forward counterparts with Mexican design motifs. Embroidered patterns and screen prints provide a counterpoint to the styles’ sleek silhouettes. Duek believes the colorful patches and imaginative prints give the pieces everyday appeal.

“[The line] was designed for hiking, mountaineering, biking and rock climbing, but it can be worn for anything,” she said. “I’ve worn it on a walk on the beach during winter, but I’ve also worn it climbing in New Zealand.”