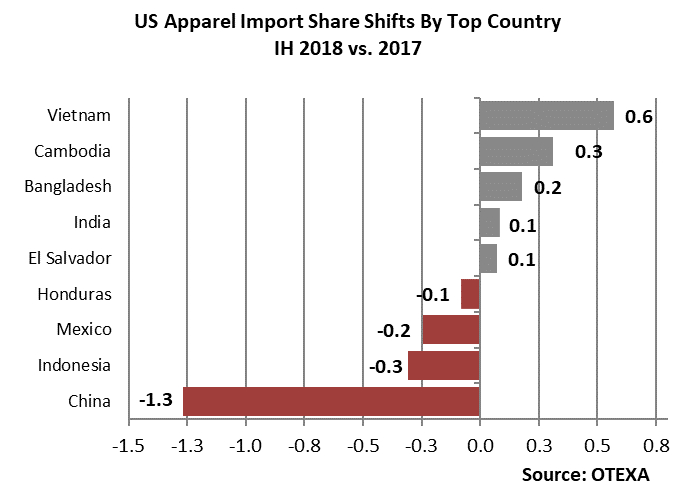 After edging down slightly in 2017, dollar imports of U.S. apparel rose in the first half of 2018. Retail apparel sales rebounded from their sluggishness amid strong consumer sentiment, and brands accelerated buying activity ahead of tariffs stemming from the U.S. trade war with China.

Total U.S. apparel imports increased by 2.2% on an MFA basis for the first six months of the year, to $38 billion from $37.2 billion in the year earlier period, according to OTEXA, the International Trade Administration’s Office of Textiles and Apparel.

On a square meter equivalent (SME) basis, imports rose by 1.2%, driving the cost per unit of apparel imports up by 1 percent compared to the year-ago period.

Vietnam, Cambodia and Bangladesh all got bigger chunks of the U.S. import pie, taking share from China, Indonesia and others as more U.S. retailers and brands diversified their sourcing portfolio beyond China, even though apparel has not yet been listed on any of the new tariff lists. Despite efforts by many brands to expand near-shoring opportunities to improve speed to market and reduce carbon footprint, Honduras and El Salvador both lost share of total U.S. imports.

Imports from Cambodia grew the most of any top 10 trading partner, by more than 14 percent in the half, to $1.1 billion. Total SMEs from Cambodia rose by 12.5%, resulting in an average cost increase of 1.6%. Men’s woven cotton shirts, women’s cotton pants and women’s manmade fiber knit tops were the big growth categories from the southeast Asian country.

Bangladesh also enjoyed an increase in shipments to the U.S., of 4.8%, to $2.7 billion. Total SMEs rose by 4.1%, resulting in a slight increase in cost of these U.S.-destined goods.

Vietnam has gained 60 basis points of share of U.S. apparel imports so far this year, to $2.7 billion, or 15 percent of the total. SMEs were up by 1.7%, resulting in a cost increase of 1.6% compared to last year.

Despite a rush to bring in goods from China before any new tariffs kick in, apparel imports from China fell by 2 percent in the first half of the year compared to the same period in 2017. Volume dropped by 0.8%, however, driving cost down by 1.2% compared to last year as the production of many labor-intensive and complex garments  moved to other countries.

China’s dollar share of U.S. apparel imports, which peaked in 2010 at more than 39 percent and has been on a slow decline ever since, lost 1.3 percentage points of share since mid-2017, to comprise 29.6% total U.S. apparel imports. Higher manufacturing costs and near fears of higher tariffs are driving many brands to seek sourcing options elsewhere in Asia. 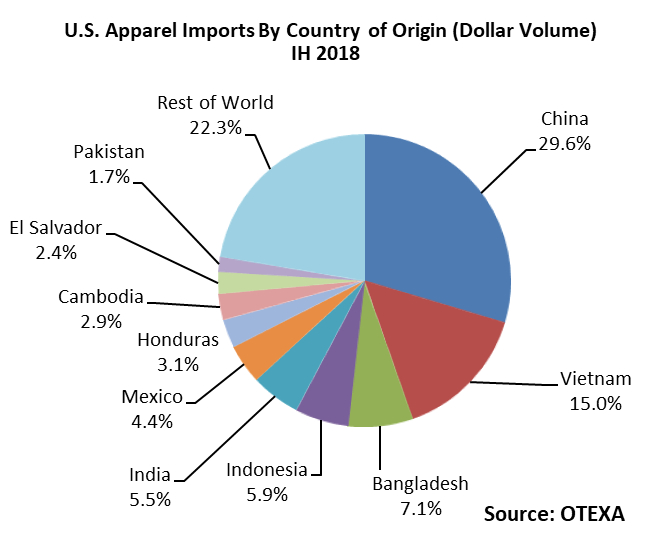 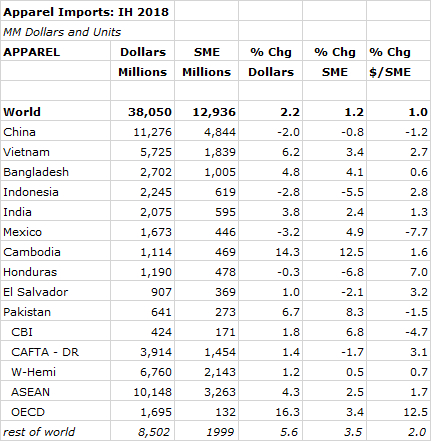