As bottlenecks continue to batter the supply chain, many apparel importers also have to worry about the ramifications of dealing with tied up inventory, and unfortunately for them, they must understand the complexities of today’s geopolitical landscape.

For example, while U.S. Customs and Border Protection (CBP) places Withhold Release Orders on goods that contain cotton from the Xinjiang Uighur Autonomous Region (XUAR), brands that aren’t well versed in the situation can often be thrust under a microscope that isn’t always fair. Dr. Eugene Laney Jr., president and CEO, American Association of Exporters and Importers (AAEI), believes there is still a lack of transparency and predictability when it comes to addressing issues like forced labor that supply chain associations and the CBP must align on to make progress.

This situation only gets worse for small- and medium-sized businesses that often are unsure of what documentation they need to even get those goods if they’re being detained, Laney said Tuesday at the Sourcing Journal Summit.

“We’re really working with the CBP to try to figure out a way that we can be a little bit more transparent and get involvement in the front end before these WRO’s come out,” Lahey said. “At the end of the day what that does is that creates a reasonable due process, because we don’t see that right now. We don’t see with shippers, when their goods are being held at the border. They’re not receiving a kind of due process, and the ability to provide government officials with the right information.”

Is Canada About to Get Another Forced Labor Law?

While many have called for increased federal intervention to alleviate port congestion, added government expenses may not be a panacea due to so many factors that are out of the U.S.’s control, according to David Spooner, partner at law firm Barnes & Thornburg LLP. This includes both the pandemic-related factory closures and port closures overseas, as well as power outages in China.

“There’s federal legislation that would restrict demurrage charges and regulate ‘unreasonable’ refusals by carriers to accept shipments,” Spooner, who also serves as co-chair of the International Trade Practice Group, said. “Good or not, those reforms are not going to solve our supply chain issues.”

Although a longtime proponent of legislative action, Laney agreed that there are concerns surrounding the methods of government organizations such as the CBP, which is still too focused “on today’s deals and not looking in advance,” he said.

Laney advocates that the government approach the current port congestion issues not just from an economic perspective, but with national security in mind as well.

“We feel like the port congestion issue is a national security issue,” Laney said. “If you think about it, you know the counterfeiting, the drug smuggling, everything that goes on at the border, even the congestion itself around the port creates some vulnerabilities for us around security issues. This should be a broad government approach to look at this.”

If the government gets further involved, Laney believes that supply chain players should take the lead on the projects and set the rules for the government to follow and sign off on, instead of the other way around.

As more importers turn to air freight to get products over to the U.S. quicker, some have sought to take advantage of de minimis regulations to circumvent the escalating costs, in that they can import goods duty free if they are valued at less than $800.

But Spooner gave three reasons as to why following the de minimis rule hasn’t been the solution for importers. 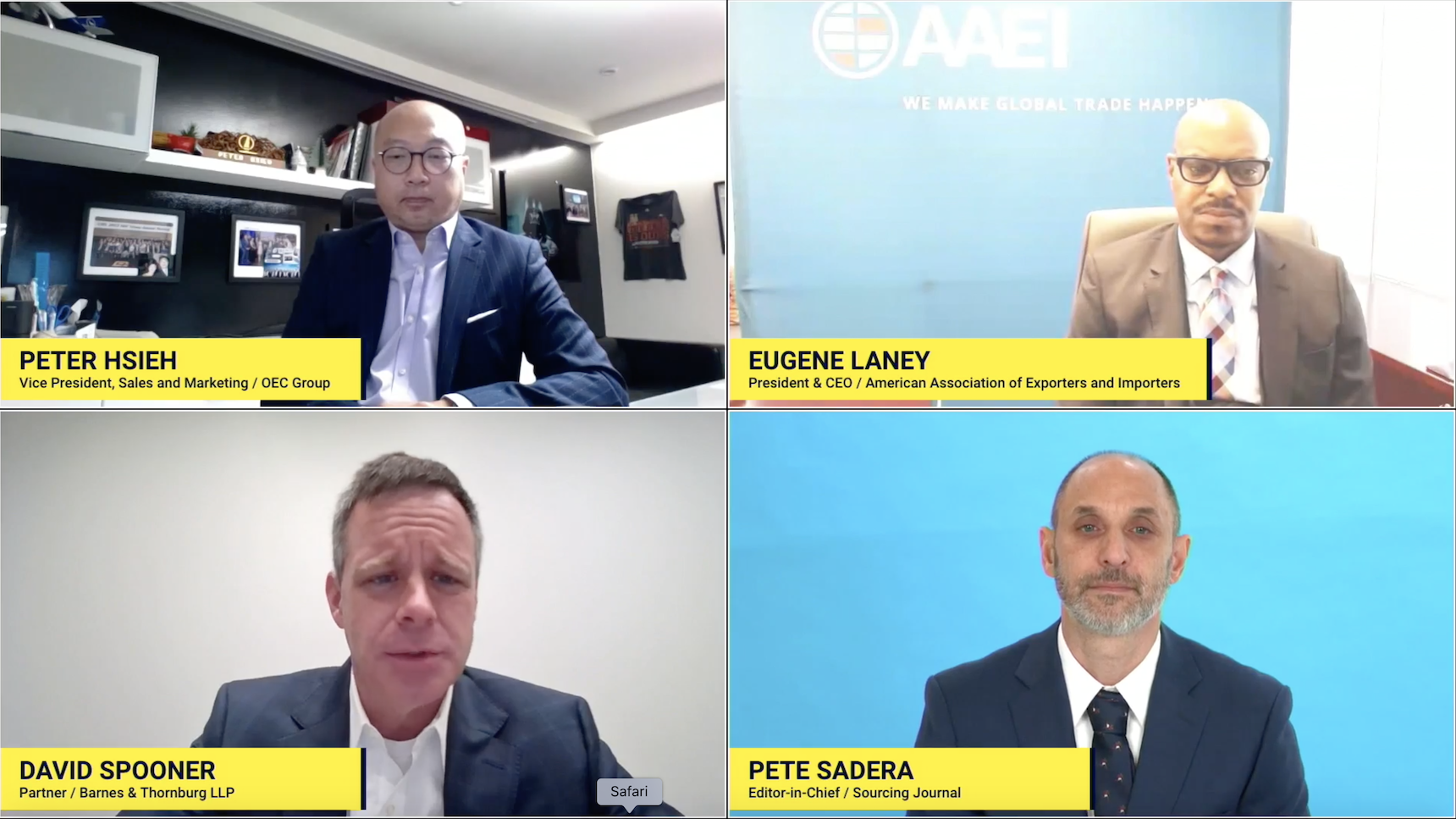 “The first is the obvious one, air freight is so expensive. It’s not an everyday solution to universal supply chain issues,” Spooner said. ‘Secondly, there are delays even at the airports. I saw an article recently about congestion and delays at O’Hare. And third, as I mentioned earlier, certainly not all, but many of the issues that we’re seeing lie outside our borders. Even air freight won’t help with those things.”

“Instead of Shanghai to Chicago, we’ll go Wuhan to Columbus, Ohio, just to avoid some of the congestion,” Hsieh said. “We can buy ourselves two-to-three days to deliver to our customers faster rather than going to a traditional airport.”

Echoing many others, Hsieh called this the “new normal” for the supply chain, indicating that the freight forwarder is already preparing beyond the holiday season for Chinese New Year on Feb. 1, as well as the 2022 Winter Olympics in Beijing just days after.

Hsieh also gave a brief preview of a potential concerns for the future of global supply chains, noting that current contract negotiations between shipping carriers and the International Longshore and Warehouse Union (ILWU) are ongoing, with the current contract set to expire in May.