Footwear and clothing top the list of goods making up the biggest share of seizures of counterfeit goods in value, according to a study released Monday by the Organization for Economic Cooperation & Development (OECD) and the European Union Intellectual Property Office (EUIPO).

The “Trends in Trade in Counterfeit and Pirated Goods” report puts the value of imported fake goods worldwide based on 2016 customs seizure data at $509 billion–now representing 3.3 percent of world trade and rising–according to OECD, up from $461 billion in 2013, counterfeits accounted for 2.5 percent of world trade.

The next most common sectors that were targets of counterfeit trade were leather goods, electrical equipment, watches, medical equipment, perfumes, toys, jewelry and pharmaceuticals.

In conjunction with EUIPO, the study took a deeper dive into counterfeiting in the European Union (EU) and found it represented 6.8 percent of imports from non-EU countries, up from 5 percent in 2013. The data does not include domestically produced and consumed fake goods, or pirated products being distributed through the Internet.

The study said trade in fake goods not only infringes on trademarks and copyright and takes away commerce from legitimate businesses, but also creates funds for organized crime gangs at the expense of companies and governments. Fakes of items like medical supplies, car parts, toys, food and cosmetics brands and electrical goods also carry a range of health and safety risks.

Experts Say This Lawsuit Could Force Shein to Stop the Steal 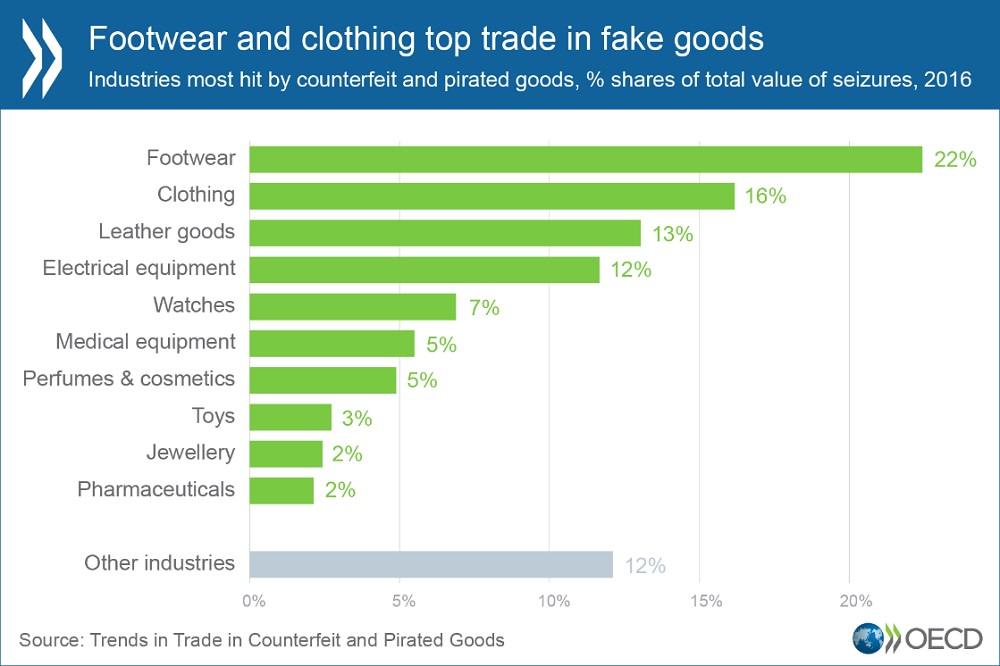 “Counterfeit trade takes away revenues from firms and governments and feeds other criminal activities,” said OECD public governance director Marcos Bonturi, who launched the report with Paul Maier, director of the EU Observatory on IPR infringements at the EUIPO, and EU ambassador to the OECD, Rupert Schlegelmilch. “It can also jeopardize consumers’ health and safety. Counterfeiters thrive where there is poor governance. It is vital that we do more to protect intellectual property and address corruption.”

The countries most affected by counterfeiting in 2016 were the U.S., where 24 percent of brands or patents were impacted by the fake products seized, followed by France at 17 percent, Italy at 15 percent, Switzerland at 11 percent and Germany at 9 percent. The study added that an increasing number of businesses in Singapore, Hong Kong and emerging economies such as Brazil and China are also becoming targets.

China is the top producer of counterfeit goods in nine out of 10 analyzed categories, according to the study. Several Asian economies, including India, Malaysia, Pakistan, Thailand, Turkey and Vietnam, are also key producers of fake merchandise in many sectors, although their role is much less significant than China’s.

The study noted that Turkey appears to be an original country for the manufacturing of fakes such as leather goods and cosmetics, mainly to the nearby EU market. Four transit points–Albania, Egypt, Morocco and Ukraine–are of particular significance for redistributing fakes destined for the EU, while Panama is an important transit point for fakes on their way to the U.S.

The top means of transporting counterfeit goods were and continue to be small parcels sent by mail or express courier. Small parcels made up 69 percent of total customs seizures by volume from 2014 to 2016, up from 63 percent in the 2011-2013 period. Containerized shipping is also a common mode of transport.

The study also cited low labor costs and poor labor regulations as helping to drive the trade in counterfeit and pirated goods. Improving working conditions, by raising the minimum wage or increasing paid leave, would decrease the share of counterfeit and pirated products exported, especially by economies with weak governance, OECD said.

The ability to trace and track consignments would also reduce counterfeit and pirated exports. Trade facilitation policies that enhance transparency also reduce the likelihood of an economy exporting fakes. Other factors tend to encourage counterfeit trade, such as self-policing by industry and the possibility to appeal administrative decisions by border agencies.

OECD said it is working with its member countries on formal guidelines to help authorities stem the problems. Working with over 100 countries, the OECD is a global policy forum that promotes policies to improve the economic and social well-being of people around the world.