The settlement resolves a False Claims Act lawsuit against CEO Joseph Bailey and his two New York City companies, Stargate Apparel Inc. and Rivstar Apparel Inc., according to the court filing on the settlement agreement. “These false claims enabled Stargate and Rivstar to underreport the ‘entered value’ of the wearing apparel and thereby wrongfully reduce their obligations to pay statutory Customs duties to the United States,” the original complaint stated.

The action, initiated by a former employee under a whistleblower complaint in the United States District Court for the Southern District of New York in 2014, alleged that the defendants submitted invoices to the U.S. Customs and Border Protection (CBP) that understated the true value of the clothing that they imported into the United States to avoid paying millions of dollars in U.S. customs duties.

The United States investigated the whistleblower’s allegations and joined in the lawsuit. All the defendants admitted the allegations against them as part of the civil settlement. Bailey also pleaded guilty to related criminal charges and was sentenced to six months in federal prison.

The settlement agreement among the whistleblower, the United States and the defendants was approved by U.S. District Judge J. Paul Oetken on Wednesday.

According to McInnis, a former federal prosecutor, the whistleblower who brought this action will receive more than $1.2 million for the information he provided, which was confirmed by the court settlement filing. That unnamed person was “very courageous and extremely helpful to the United States during the ensuing civil and criminal investigations,” McInnis said.

Geoffrey S. Berman, the then-U.S. Attorney for the Southern District of New York, indicted Bailey for participating in a years-long scheme to defraud CBP in a scheme that government claimed resulted in the loss of more than $1 million in duty revenue.

Sofie the Label Hit With Breach of Contract Lawsuit

According to the 2019 indictment, after purchasing much of its merchandise from a manufacturer located in China, Bailey and others at Stargate allegedly engaged in a “double-invoicing scheme” in which Stargate would receive two sets of invoices from the Chinese manufacturer for the same shipment of goods. 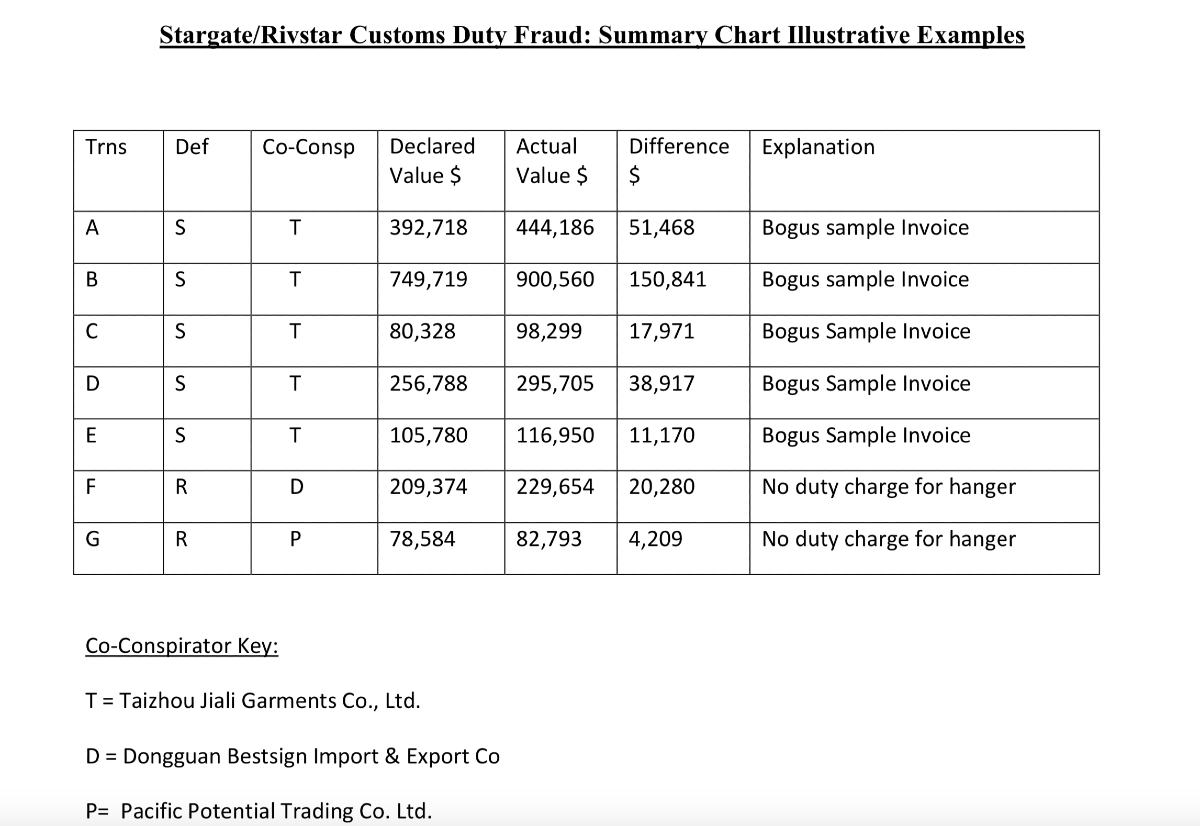 Around 2010, Bailey and other employees of Stargate began a new variation of the customs fraud scheme, involving invoices for “sample” goods, by which the Chinese manufacturer would send two separate sets of invoices for a given shipment that together reflected the true price of a particular shipment of clothing. The first invoice, typically entitled the “commercial invoice,” described the goods purchased and was submitted to CBP. The second invoice purportedly reflected amounts paid by Stargate for “sample” goods and was not submitted to CBP. Sample goods are not subject to customs duties.

Salvatore Stila, president of Alba Wheels Up, an international freight forwarder and customs broker, told Sourcing Journal that the case demonstrates the risks of trying to cheat CBP, which is increasingly rely on sophisticated analytics and technology to detect this kind of fraud. Customs, he added, is likely “devising new formats” to capture data that previously may have slipped through the cracks.