For companies that import goods into the United States, trade legislation has a tremendous impact on their business’ bottom line and supply chain strategies. Two panels during Sourcing Journal’s Global Outlook Conference last week covered a few of the laws and legislative issues that fashion companies need to keep up with—including new due diligence demands, trade preference uncertainty and possible changes to de minimis.

In January 2021, Withhold Release Orders (WRO) went into effect for cotton-containing products entering the U.S. from China’s Xinjiang Uyghur Autonomous Region (XUAR). The upcoming Uyghur Forced Labor Prevention Act (UFLPA)—signed in December and going into effect in June—expands the list of prohibited goods to any products from the XUAR, establishing a “rebuttable presumption,” according to Andrew Samet, principal of trade consultancy Sorini, Samet & Associates.

Under the existing WROs, importers have 90 days after Customs and Border Protection determines good might be made with forced labor to prove otherwise and have their shipments released. The burden of proof includes submitting affidavits for every step of the supply chain, back to the raw material. “It’s a very difficult burden to meet, and most detention notices have not been overcome,” Samet said. “That means most importers have either re-exported the goods or destroyed them.”

One means to back up material origin is traceability. For instance, Applied DNA Sciences’ CertainT platform tags cotton at the gin level using unique DNA markers, which can then be tested later to authenticate fiber provenance. Applied DNA is also working with Stratum Reservoir to use isotope analysis to verify that cotton didn’t originate in Xinjiang. A DNA sequencing database also provides more geographic intel by looking at location-specific indicators.

Republican Lawmakers Want to Blow Up 'China Trade Shock.' Will It Work?

“Changes in technology are going to fundamentally reshape and remake the compliance programs for companies,” Samet said. “It’s becoming increasingly possible through technology to identify the source of those inputs and the conditions under which they were developed and produced.”

To effectively trace material provenance, Wayne Buchen, vice president, strategic sales at Applied DNA Sciences, said companies need to incorporate traceability solutions like CertainT from the start, taking a fiber-forward rather than product-backward approach. “We are getting inundated…with importers, brands and customers looking for a solution that can help them get an immediate win,” he said. “But you have to realize, for us to be able to do what we do best—and that’s to provide a secure supply chain—we have to be able to go back to the raw cotton.” 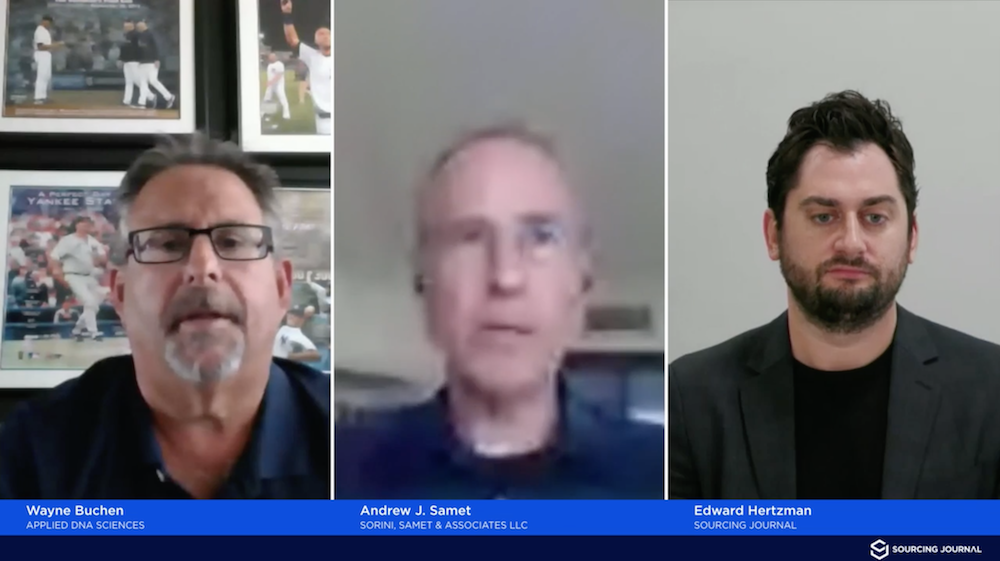 To prepare for UFLPA, Buchen suggests establishing a procurement strategy and fostering transparency and collaboration within the supply chain. Companies should also determine which areas of the sourcing map are potential risks, and then store this data in a centralized system, such as enterprise resource planning (ERP) software. The risk of each material and trim should be identified from the product development phase onward.

Buchen also stressed being proactive rather than reactive. “If you put in place your strategies, and you put in place some transparency with your suppliers, and you work back to the provenance of your raw materials, it gets a little easier,” he said. “It’s not a slam dunk, but you need to start today and not have a knee-jerk reaction when you get caught.”

UFLPA is part of a larger trend of governments legislating sustainability through laws like the proposed New York Fashion Sustainability and Social Accountability Act. Due diligence demands are rising, and brands face more scrutiny. “There’s been a lot of lack of confidence in many stakeholders—including to some extent governments now—in the traditional audit models, leading to sufficient change and sufficiently fast,” said Samet. “This is driving new due diligence legislation, pushing more responsibilities to brands and retailers, and with increasing potential legal liabilities.”

Another top-of-mind topic for importers is de minimis. Under Section 321, merchants shipping direct-to-consumer to the U.S. from international destinations can send up to $800 per day to each customer duty-free. The de minimis threshold was raised from $200 to $800 in 2016. Rick Helfenbein, special advisor to Sorini, Samet & Associates LLC, noted this has helped propel the business of overseas pure-play companies like Shein that don’t have a U.S. brick-and-mortar presence. Currently, he noted about 2 million packages per day are entering the country via Section 321. “The minute the pandemic hit and everyone’s buying online direct-to-consumer, this became a significant factor and something to talk about,” said Helfenbein.

Columbia Sportswear Company’s vice president, global customs and trade Jeff Tooze said that foreign companies have the greatest advantage via de minimis for shipments with high tariffs. For instance, the brand’s fleece jackets have a duty rate of 32 percent. International competitors that don’t need to account for tariffs can offer lower prices, which might sway shoppers.

Tooze is part of a coalition that is striving to establish a “level playing field” regarding Section 321. One change he would like to see is the inclusion of U.S. foreign trade zones (FTZs). Currently, if goods are bulk shipped to a warehouse in an FTZ, they are treated as if they entered the U.S., making them subject to tariffs. This encourages brands to warehouse goods in places like Canada or Mexico to take advantage of the provision. This also contributed to the movement of jobs out of the U.S., said Ronald Sorini, principal and co-founder of Sorini, Samet & Associates LLC.

Some entities are trying to shut down de minimis entirely. The future for de minimis is uncertain, but Sorini and Tooze foresee change on the horizon. “De minimis as it exists today will not be how it exists a year from now,” Sorini said. 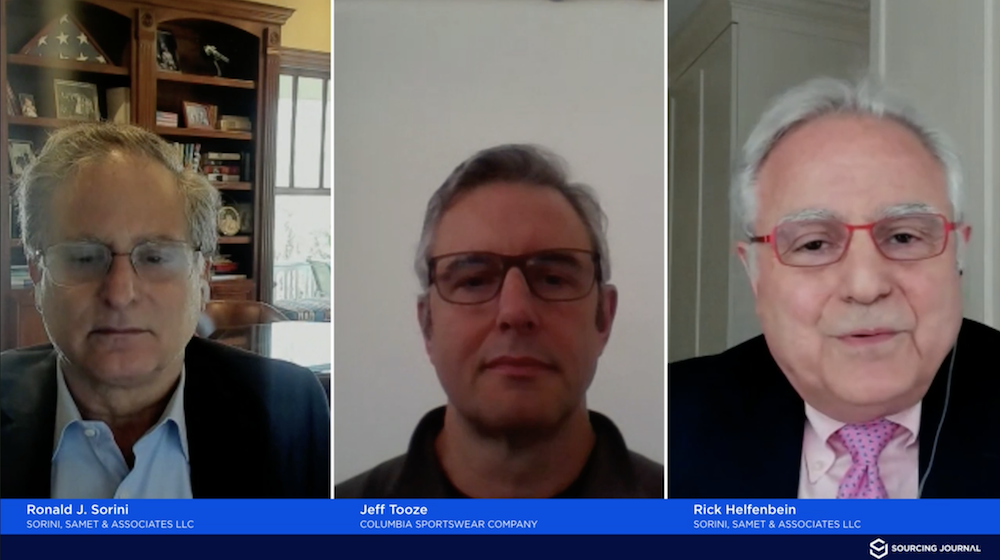 The Generalized System of Preferences (GSP) is also up for renewal. This scheme gives developing economies access to the U.S. market by eliminating duties on a number of goods.

Tooze expects Congress to renew GSP, but he is less clear when this will happen. In the past, Congress has allowed GSP to lapse, leaving importers to pay duties during the hiatus. Once reinstated, the duty-free status is retroactive, however he noted that cash flow can be impacted during the delay.

Apparel and footwear are typically excluded from GSP, but a coalition including Helfenbein and Columbia fought to add travel goods to this program, which includes categories like handbags and backpacks. Tooze noted efforts to also expand GSP to include specific footwear styles that are not currently made in the U.S. Sorini said including footwear would make GSP a “more effective tool” in encouraging program nations to live up to the standards set by the U.S.

Currently, Columbia takes advantage of GSP by producing eligible goods such as gloves, scarves and travel goods in program countries. Tooze views it as a lever for diversification of production. “I can’t think of a better program than GSP to incentivize companies like ours to invest the capital, training, supply chain infrastructure, and all those things that are necessary to build an apparel or footwear industry, simply by eliminating these high tariffs,” he said. “It’s a great incentive to help offset that cost and to actually make it happen.”

Countries can lose their GSP status due to economic development. However, over the years, there have been a number of what Helfenbein referred to as “weaponized” uses of trade programs, such as the U.S.-China trade war, the termination of India’s GSP status in 2019 and the removal of Ethiopia from the African Growth and Opportunity Act (AGOA) trade preference program.

Per Sorini, some consider preference programs to disincentivize the creation and signing of free trade deals. But he does not see them as “mutually exclusive.” “That should be a pathway to eventual free-trade agreement, but we should not revoke it,” he said. “They’ve got to do a lot of soul searching. And companies in the apparel and footwear industry have to have input into how these decisions are made.”

To grapple with uncertainty and disruptions—ranging from UFLPA to upcoming trade agreement renewals—one thing companies can do is expand their sourcing map. “Companies need to diversify, and supply chains need to be agile. I need to be able to turn on a dime,” Tooze said. “Our country, the U.S., needs to support this, and for the long haul.”