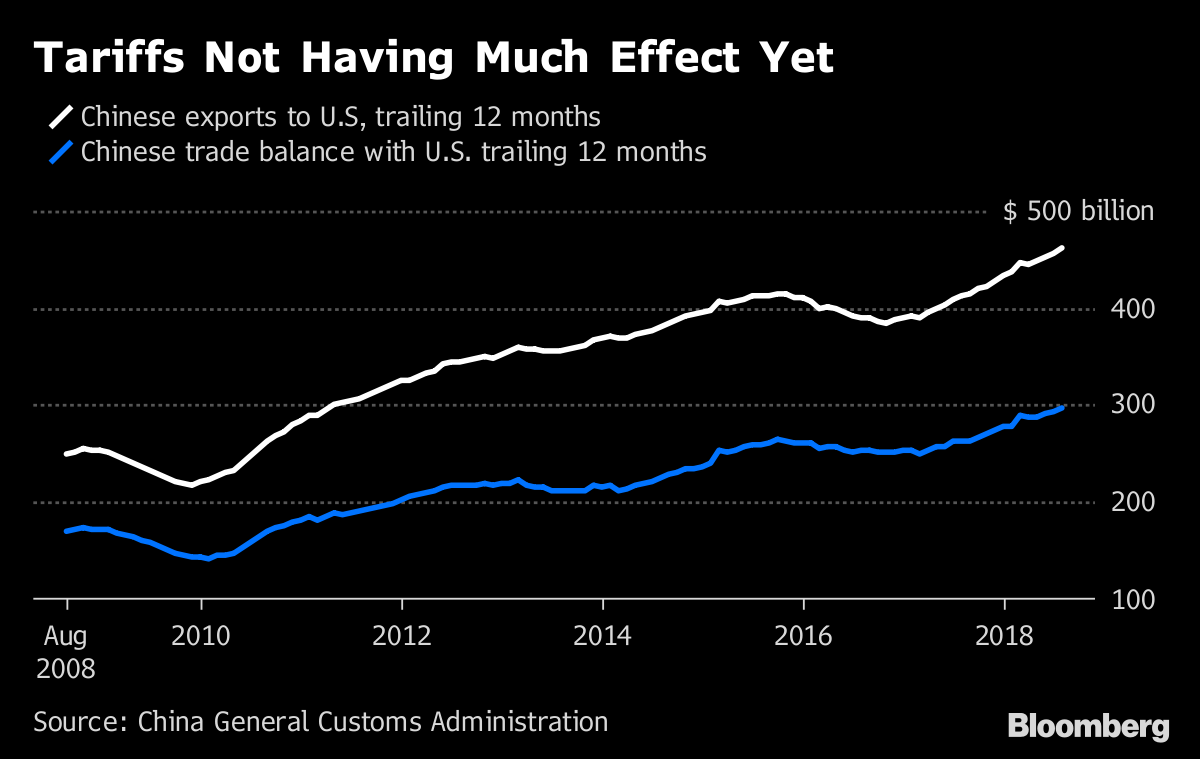 President Donald Trump prodded China to offer more at the bargaining table as the two countries prepared for their first major negotiation in more than two months in an effort to head off an all-out trade war.

“We’re talking to China, they very much want to talk,” Trump said Thursday at a cabinet meeting at the White House. “They just are not able to give us an agreement that is acceptable, so we’re not going to do any deal until we get one that’s fair to our country.”

Earlier, Trump’s top economic adviser welcomed China’s announcement that it will send Vice Commerce Minister Wang Shouwen to the U.S. for talks in late August with David Malpass, undersecretary for international affairs at the Treasury Department.

“It’s a good thing that they’re sending a delegation here—we haven’t had that in quite some time,” National Economic Council Director Larry Kudlow told CNBC Thursday. “The Chinese government in its totality must not underestimate President Trump’s toughness and willingness to continue this battle to eliminate tariffs and non-tariff barriers and quotas to stop the theft of intellectual property and to stop the forced transfer of technology.”

Kudlow said the Chinese economy and currency “are slipping, as you all know, but let’s just see what happens.” Discussions can produce better outcomes than expected, and talking is better than not talking, he added.

The Chinese delegation led by Wang will meet with an American group led by Malpass at the invitation of the U.S., China’s Ministry of Commerce said in a statement on its website Thursday. It will be fourth round of formal talks since trade tensions flared this year, but the first session since early June.

“This will be ‘talks about trade talks,’” said Gai Xinzhe, an analyst at the Bank of China’s Institute of International Finance in Beijing. “Lower-level officials will meet and haggle and see if there is a possibility for higher-level talks.”

To restart trade negotiations with the U.S., China must offer a package of measures, according to Jacob Parker, the vice president for China operations for the U.S.-China Business Council in Beijing. China needs to make an offer that slashes the bilateral trade surplus, lowers import tariffs, provides better protection for intellectual property and stops forced technology transfers, Parker said earlier this month.

The two nations had appeared to have reached a deal in May after Chinese Vice Premier Liu He—President Xi Jinping’s top economic adviser — led a group of officials to Washington. But Trump backed away from the agreement soon afterward, and ever since the two sides have been locked in a standoff as they slapped tariffs on billions of dollars of each other’s goods.

The U.S. Trade Representative’s office said on Thursday it had extended public hearings on its proposal to impose tariffs on $200 billion of Chinese goods to six days starting Aug. 20, from four days initially. As many as 370 people are expected to testify. Those tariffs, which China has vowed to retaliate against by levying duties on $60 billion of U.S. goods, could take effect after a public comment period closes on Sept. 6.

The Trump administration already imposed duties on $34 billion of Chinese goods last month, a move that prompted immediate retaliation from Beijing. Levies on another $16 billion in goods take effect Aug. 23.