Following meetings on trade in Beijing last week, the U.S. and China have agreed to hit the pause button on the would-be trade war while they settle things surrounding the trade deficit.

In a joint statement released Saturday, the White House said the two days of talks marked “constructive consultations regarding trade” and that both countries will continue to engage on the topic.

For now, however, the unsettling rumblings of a trade war appear to at least be tabled.

“We’re putting the trade war on hold,” treasury secretary Steven Mnuchin told Fox News Sunday in an exclusive interview. “So right now we have agreed to put the tariffs on hold while we try to execute the framework.”

That framework will be centered on balancing the ballooning trade deficit.

“There was a consensus on taking effective measures to substantially reduce the United States trade deficit in goods with China. To meet the growing consumption needs of the Chinese people and the need for high-quality economic development, China will significantly increase purchases of Unites States goods and services. This will help support growth and employment in the United States,” the White House statement noted.

The U.S. had a $375 billion trade deficit with China in 2017, according to the U.S. Census Bureau, and as such had been pushing for China to spend an additional $200 billion on U.S. goods and services to help chip away at the imbalance. Namely, there’d be “meaningful increases” in U.S agriculture and energy exports to China.

Though how much China would spend has yet to be officially settled or confirmed, President Trump said on Twitter Monday, “Under our potential deal with China, they will purchase from our Great American Farmers practically as much as our Farmers can produce.”

How’s this all going to work?

Mnuchin was clear with Fox that China’s unwritten agreement to spend more on U.S. exports was not a government to government transaction or a “giant purchase order.”

“We are immediately going to follow this up with [U.S. Commerce] Secretary Ross going there with very hard commitments in agriculture, where we expect to see a very big increase, 35-40 percent increases in agriculture this year alone. In energy, doubling the energy purchases,” Mnuchin said. “I think that you could see $50-$60 billion a year of energy purchases over the next three to five years.”

Everything may not come up roses in this trade truce, however, if China and the U.S. don’t agree to agree on what each nation’s next move will be on righting the trade wrongs between them.

The White House statement went on to say the two sides are discussing expanding trade in manufactured goods and services, but that “favorable conditions” are needed in order to increase trade in the sectors.

Addressing the intellectual property infringements that have largely been the impetus for Trump’s tariff targets against China, the statement said China will make relevant amendments to its laws and regulations in the area, including its Patent Law.

Whether off the table or just set beside it, the tariff volleys between the U.S. and China have been the source of considerable disruption for American businesses, in particular those that rely on global supply chains to do what they do.

In the apparel and textiles industry, companies are continuing to diversify their supply chains and look passed China for sourcing solutions. If or when the tariff talk rekindles, U.S. cotton could face the tax, and domestic manufacturers may be paying more for the machinery that makes “Made in USA” possible, which could have an adverse impact on an already dwindling industry. 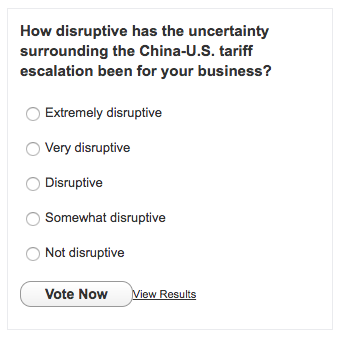